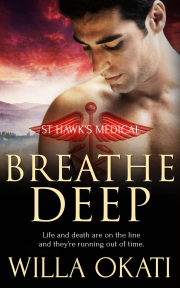 Kit made a frustrated sound as he stilled his hand. The tip of his pen would puncture clean through the paper if he wasn’t careful, and he didn’t want to start from scratch. Five more minutes of notes for the resident to sign off on, and he’d be out of there for a full weekend. Nothing difficult.

Truth be told, he should have finished them half an hour ago.

He shook his head and focused on the paper in front of him. If he wanted to keep paying tuition and get his bachelor’s—maybe even a master’s one day—and make something more of his life, then he needed that St. Hawk’s paycheck for his work as a nursing technician. Only way to do that was to walk the line.

“Get a move on already,” he muttered to himself, taking up the pen and applying it to the paper.

But no matter how he tried to lean himself against the counter of the nurses’ station, his joints ached with the sharp, sullen bite of a bad tooth. Kit could feel the grinding in his back, like giants making bread of his bones, when he tried to crack out the stiffness of his neck. Knees, elbows, hips—all as shot to hell as half the patients in this part of the hospital.

Thank God for the busyness of nurses’ stations, though. Kit might or might not have picked his spot for that very reason. He wasn’t telling. But he looked up in relief when Chelle, an hospitalist Kit had worked with before—and one of the most patient doctors he knew—growled under her breath as she slapped down a stack of lab printouts. “He’s at it again,” she said. “Cantankerous old—”

“Mr. Westmoreland?” asked the secretary, in between calls with her finger on the hold button. Kit wasn’t surprised when Chelle nodded. Everyone knew old Gib. Everyone on every floor of St. Hawk’s could hear old Gib when the gray lion took it in his head to start roaring. He’d come in almost a month ago for surgery on a fractured hip, and as often happened, one complication after another had kept him there.

Kit couldn’t blame the tough old buzzard. He would have done some roaring too, after all that. “What’s Gib up to now?” he asked as he signed the last piece of paperwork. “I could check in on him, if you want. He likes me.”

“Really?” Chelle had put her chin in her hand, but she looked at Kit now with faintly dawning hope. “How can you tell?” She waved that off. “If you can do anything with him, please, go try it. He made one of the interns cry.”

Not that that was hard to do, but Kit grimaced in sympathy. St. Hawk’s treated its people well, but interns and residents lived on coffee and ran on fumes no matter where they worked, shambling around the place gray-faced from exhaustion and chewing antacids by the handful. Kit wanted nothing more than to be one of them.

He’d thought he was on his way.

Still am, he told himself. It might not be happening again. Could just be the weather.

“Yeah, no problem. I’ll see what I can do,” Kit said, shelving his paperwork in the attending physician’s overflowing cubby and bringing up his most carefree grin, the one he was known for. Usually. When he moved, he drew on old habits that he hadn’t needed to remember in a long time to walk without letting any of the deep aches show.

Chelle whistled behind his back as he left. “I hate to see him leave, but I love to watch him go, am I right?” the secretary cracked.

Kit would have kissed her for the compliment if he’d swung that way, but it kept the grin real on his lips all the way into Gib’s room at the far end of the geriatrics ward. He’d been moved down there a week after his surgery, and had it all to himself. No one wanted to share with the old crank, and that was just the way Gib liked it.

Kit is such a lovely, popular but lonely man with a big secret. Shepherd is bigger than life, but terribly shy. Fate conspires to bring them together, but something is threatening to keep them apart...

Breathe Deep is a sweet, gentle, and sexy addition to the series. A lovely story. I adored their growing love and I liked the way the drama was handled. It didn't overwhelm me, but let me se...

Share what you thought about Breathe Deep and earn reward points.

OK, true confession: I’m a reality TV junkie. I keep the tube on for company while I’m writing, and I get drawn right in every time. Three of my favorite reality shows:

Mythbusters. If it’s wrong to have a crush on a beret, I don’t want to be right.