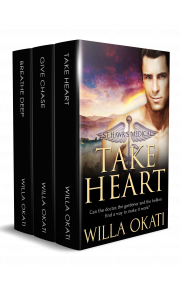 A gentle hippie with a new heart, a hellion making good, and a rebel doctor discover together how healing takes more than just medicine.

Dr. Brendan West, a dreamer and a doctor, knows there’s more to life than the job, and he wants to experience it for himself. His first step after finding a temporary job at St. Hawk’s is falling for kind-hearted gardener Evan—only to discover that Evan’s already taken by boisterous Griff.

For his part, Griff sees this as more of an opportunity than a threat. He likes the good doc’s kind heart and clear eyes, and the way he sees it, their lonely doc needs them just as much, or more. With Evan on board, he sets to work bringing Brendan into a ménage relationship.

Brendan knows he could fall hard for the odd couple, but the thing is—he’s not in St. Hawk’s for the long haul. He can’t bear to surrender his heart if he’s only going to leave it behind.

Can the doctor, the gardener and the hellion find a way to make it work, or will they find themselves losing out on love?

Griff linked his hands loosely across his lap to sit back and get a better look at how the good doctor took that little speech. Not bad. Soberly, but that seemed to be his nature. He did clean up pretty, though, didn’t he? Take off the white coat and he had a pair of shoulders that a quarterback could be proud of. Strong arms filled out the light sweater he’d wrapped himself in, something made in soft-looking yarn that variegated between gray and white with dark speckles like cinnamon dashed over cream.

Griff leaned to the side to get a better look at how Brendan fitted into his jeans, and whistled under his breath.

“Glad you approve,” Brendan muttered behind his own nearly empty glass. He blushed straight after, but he didn’t duck his head and turn away, and Griff liked his spirit all the better for it. “Listen. I hadn’t meant to bring this up, but I might as well.”

This ought to be good. Griff fished a sprig of mint out of his glass and twirled it at Brendan between thumb and forefinger in a well, let’s hear it, then gesture.

Brendan met his gaze as a man should. “I don’t know why Evan invited me, except that as far as I can tell he’s genuinely that sweet-natured.”

“And, he’s yours,” Brendan returned calmly. Only the white of his knuckles gave his true feelings away. “I still don’t know what’s going on inside your head, but I didn’t come tonight to cause trouble. I’m asking you plainly if you want me to leave.”

Griff’s contrary nature always had led him around by the balls. He kicked his legs forward, sprawling wide and lazy. Evan called that a surefire tell, swearing that when Griff was most interested, he looked least likely to move. Sleeping Tiger, Snoozing Dragon. “Now, why would I want that?”

Frustration brought a brighter spark of life to Brendan’s face and made his accent burr-r-r-r. Damned fine-sounding. “Because if you weren’t here, I would still be interested in him,” he said. “And even with you here, I’m tempted. Is that plain enough?”

“It’ll do.” Griff enjoyed teasing this man more than he’d thought he would. “You don’t think I’m pretty?”

“Of course I do, I’m not—” Brendan shut his mouth with an audible click of teeth. He exhaled. “And that is not something I’d meant to say. If you’re kind, you’ll pretend it never happened.”

Oh, Griff thought as the engine inside his head finally started ticking over.

“Back,” Evan announced from behind him. He eased drinks full to the brim onto their table as deftly as any professional waiter, though with a twinkle in his eye Griff would bet astronauts could see from space.

Evan, you sneaky son of a gun. I see what you mean now. Right in front of my eyes.

“Oh, thank God,” Evan breathed as he took a seat and curled up with one foot beneath himself. “I wasn’t sure what I’d have to do if you didn’t get there soon.”

“You think you’re clever, don’t you, darlin’?” Griff asked quietly as Brendan tried to bury his thundercloud of emotions in a fresh glass of red, red wine.

“Yes, I do,” Evan murmured, one soothing hand warm on Griff’s thigh. “He’s exactly what we’ve been looking for. Are you with me?”

“Since the physician can’t heal himself,” Griff said. He tipped back a hearty swig of his refill with a satisfying clatter of ice cubes. “All right, darlin’, you started the music, so I’m gonna call it your dance. How do you want this to go?”

Evan hadn’t chosen the Palomino at random. Griff loved the food, but Griff would chow down on a block of newsprint if it came with enough butter and salt. The views through the floor-to-ceiling windows would take anyone’s breath away, but if he wanted to take in the great outdoors, he preferred to be outdoors. Any bar and grill or just plain bar might have done, except for one thing—live local music on Friday nights.

And he’d timed his exit and return just right.

Pleased with himself, he tilted his head to catch the first warm-up notes of the band. Not one he knew, but he’d idled by the low-rise stage while watching Griff work his magic from afar, and the peek he’d gotten at the band’s set list suited him down to the ground. They’d start off fast and hard, and moving to that kind of music would be like falling into bed after going long enough without it to be hungry.

Brendan must not have noticed the musicians setting up. He pricked his ears, and almost seemed to slump. At Evan’s curious gesture, he explained, “I’d hoped to have a word with you, but they look like they’re going to be loud.”

Evan kept a straight face as Griff nudged him in the side. He nudged back. Don’t you worry, I’ve got it covered.

“You can still talk to me,” Evan said to Brendan. He slid his chair back and stood. “Any time you want. Music doesn’t last forever, and I’d rather enjoy it while I’ve got it. You could enjoy it with me, out there. I’d like that.”

Griff coughed to cover the chortle Evan knew would have popped out of him.

Brendan blinked those huge dark eyes of his at Evan.

Poor guy. Evan’s heart softened. He really wasn’t used to this at all, was he? He took both of Brendan’s hands in his and pulled gently, coaxing the good doctor to his feet. Just to be on the safe side, he held on to the right even when Brendan was fully upright. “Come on. Let your hair down tonight. You’ll like it once you try it, I promise.”

“That’s not what I’m worried about,” Brendan muttered. He caught up his drink, spilling a few drops over his hand and down his wrist, and tossed back a deep enough gulp to make Griff give him an impressed tip of the hat. “Tonight, that’s… You’re sure?”

“There’s nothing to doubt,” Evan said. Behind his back, he tossed a quick gesture to Griff, which he hoped Griff interpreted correctly as Give us a minute, and then you can play too. Then, he tugged at Brendan’s hand. “I want this. Come with me.”