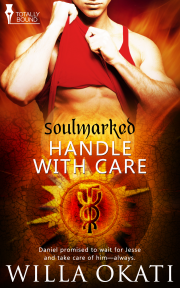 Book 3 in the Soulmarked series

“Jesse? Someone’s here to see you.”

Jesse eased a heavy keg of Guinness onto the stone cobbles next to the old brewery wall before he glanced up. Cade stood at the far end, wiping wet hands on his sturdy green waist apron as he unwound its drawstrings. He wasn’t the regular bartender, but had come to fill in for a week while the Hart and Hound’s owner, Helena, took her vacation time. She’d promised Jesse he could trust Cade, but Jesse hadn’t made up his mind about that yet. “Say again?”

Cade motioned backward. “Someone in the bar said he wants to see you.”

Jesse didn’t move. Yet. He’d dropped into a crouch to settle the keg where it needed to go, and his arms ached from the strain of lifting it, wood and steel hoops and all. They didn’t do pretenders or knockoffs at the Hart and Hound in Folly’s Bow. Good plain beer, plain folks, and a plain town where they looked out for their own.

He wasn’t one of their own, but they’d let him in anyway. “Did you recognise him?”

“Nobody I’ve ever met. Says he’s a friend of yours.” Cade dropped the damp apron into a wheeled bin and fetched a clean replacement from the shelf by the door that led around to the pub proper. He was the kind of guy who crackled with life and energy even when standing still, and it made Jesse miss Helena. She got the job done with no muss and no fuss. Tired eyes, tired smile, kind heart. No questions asked of a man who’d gone to war and come back with more scars than skin, jumping at shadows. She’d given Jesse a job in the back of the tavern when her brother, his old buddy, had asked it of her.

Jesse didn’t have sisters. Helena made him wish that’d been different.

Thoughtful, he reached out to rumple one of Dog’s silky-soft red ears. The big wolfhound-setter mix didn’t wake up, but his long fringed tail swept the cobblestones with a happy thump-thump-thump. A headache that’d been building for the past few hours, gathering weight and strength behind Jesse’s eyes, made thinking harder than it should be. Than he remembered it used to be.

Petting Dog helped, usually. God, but he’d grown. Seemed like yesterday he’d fished a puppy out of the dumpster where he’d heard it crying. Good thing, too. He and Dog had saved each other’s lives. Helena called him a service dog to get around the rules for having animals in the tavern.

Jesse stroked the gentle slope of Dog’s back now, grounding himself. Strangers didn’t come looking for Jesse. Everyone who mattered—for now—already knew him. Maybe. He forgot, sometimes. Both things and people. “Should I look and see if I recognise him?”

“If you want,” Cade said with a casual shrug. He kept one eye on Jesse while he tied a knot in his new apron and stepped to one side, nodding at the door. “If you go just far enough to peek through the galley window, you’ll see him. He’s with that big group from the road crew.”

Jesse knew most of the road crew by sight. Decent guys, most of them. Rough around the edges but they wouldn’t hurt a fly, and they liked Dog. He patted Dog’s neck and murmured, “Stay.”

Cade laughed. Too loudly, but he meant well. “Somebody’s got to teach that hound how to relax,” he said as he crossed paths with Jesse and knelt by the big dog’s head, rumpling his ears. “Go on. I’ve got him.”

Jesse thought Helena must have given Cade the rundown on how to treat him. Handle with care. He’d be humiliated if he wasn’t grateful. He nodded a clumsy thanks to Cade as he slipped past him.

It wasn’t often that Jesse ventured even so far as the Hart and Hound’s kitchen. He wasn’t good with crowds, either, but as long as he stayed as far back from the noise and lights of the colonial-era tavern, he managed. It wasn’t far. No one saw him except the short order cook who did the burgers to go with the beers, a small man who shot Jesse one incurious glance, shrugged and visibly dismissed him.

The stranger amongst the road crew had settled himself at a good angle to be seen through the galley window. Smallish for a guy, but wiry. Dark hair, so dark it nearly shined blue under the low lights. Tanned from hard work.

He should be pale, Jesse thought. Clear as moonlight.

Why did I think that? I—

I really like the world Okati has built around humans having mates. The author continues to expand on the world, bringing in new elements, but it works well with what’s come before.Read more reviews

What I enjoyed most about this story was the emotion which was so brilliantly portrayed in this short, but lovely book. The intensity between Jesse and Daniel swept me away with emotion. I could feel their...

Share what you thought about Handle With Care and earn reward points.