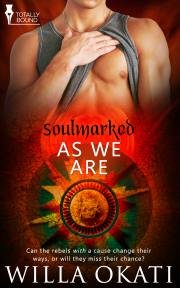 Book 4 in the Soulmarked series

Wild, rebellious, and rakish, Cade’s been a bad boy since the day he was born. Don’t get him wrong—he’s as aware of his faults as he is his virtues, and he thinks he’d be better off without a mate of his own. He’d be a hell of a handful to keep up with.

Then a chance encounter brings Cade into Dennis’ path. Blind since birth, Dennis prides himself on being plainspoken and knowing how to have a good time. He isn’t looking for a soulmate either, but after meeting Cade he’s tempted to change his mind.

A jingling ring of keys sailed in an arc over the hood of Cade’s old Mustang, well-loved, ridden hard, and looking like it. Cade caught the keys neatly in one hand and held them up, scowling. “Not again.”

“Afraid so. You’ve been walking around with your head in the clouds for days. I mean, if I didn’t know you, I wouldn’t be able to tell the difference, but…”

Cade’s baby brother Nathaniel—not so much a baby these days as a twenty-one-year-old with disturbingly high levels of independence—took the slow way around the car. He juggled three bags of ice, slippery and already drippy in the muggy city evening heat. “I try. One of these days you really are going to lock yourself in—or out—and then what will you do?”

“Do I have a lifeline? Can I phone a friend?” Cade mussed Nathaniel’s hair good and proper, enjoying his mini scowl of patient disapproval. Such were the rights and privileges of an older brother.

Nathaniel rolled his eyes. “That depends. Did you remember to bring your phone with you?”

“In this hypothetical situation where I’ve locked myself out of my car? Let’s say yes. And in that case, I’d call you because you’re a sensible kind of guy, and mostly soft-hearted enough not to mock me for the mess I’ve gotten myself into. Here, give me one of those before you drop them all, would you?”

Cade snagged two of the bags. Heavy, but manageable. He’d scored a decent parking space, less than a block away from the Eclipse party Nathaniel’s friend from the library was hosting. Though Cade hadn’t been personally invited and didn’t mean to stay, Nathaniel had needed a ride and Cade had had nothing better to do than lend a hand and a wheel.

“Why are we bringing ice, again? Did they run out?”

“Questions, questions,” Nathaniel chided. He knocked shoulders with Cade gently, letting him know he didn’t mind. Nathaniel could be a sweetheart that way, and very different to their stoic, gruff elder brother Robbie.

Whereas Cade… Well, Cade was the middle child and everyone knew it. Cheeky, restless, and addicted to cracking wise. A handful and a half. God help the poor bastard who might be his soulmate one day. Cade wasn’t sure anyone deserved that fate.

He shot a narrow stare at Nathaniel’s upper arm, where he had—just once—spotted a soulmark coming through, a cocoa-brown design on his pale skin.

“You still don’t have X-ray vision,” Nathaniel said in his quiet, contented way. “You’ll see it when I’m ready for you to see it. And no one called me about the ice. It’s just a thing. Everyone runs out of ice at every party. I thought I’d bring some and save Dennis the trouble of sending out for more.”

Cade couldn’t say he was surprised. Very nearly too sweet to live, Nathaniel was. Cade saw it as his mission in life to find, corner, and instill the fear of God, man, and rifles into any man who dared to think himself good enough for Nathaniel.

He hadn’t had much luck so far, but Cade preferred to see that as a challenge, not a failure. He’d get there in the end. For Nathaniel’s own good. Nothing to do with curiosity at all, nope, no sir.

Though he was fairly certain at least half the reason Nathaniel wouldn’t ’fess up about the identity of his soulmate was because he knew suspense drove Cade insane.

This story was amazing and I really loved it. It was by far my favorite out of the whole series. It gave me exactly what I could want in it. It gave me two sexy men, both men with a bit of self-confidence issue...

Another strong installment in the Soulmarked series. Cade is really a well-rounded character, and I enjoyed getting to know him better. Dennis’s sense of self was so well developed he was really jus...

Share what you thought about As We Are and earn reward points.

A few weeks ago, I started my day the same way I always do. Stumble out of bed, make coffee while attempting to interpret the notes I scribbled down before falling asleep the night before (depending on how drowsy I was it’ll look either like a drunken chicken dance or an LSD spiderweb). Take coffee outside to the section of sidewalk I call my porch and drink deep of the nectar of life until I feel semi-human. Repeat as necessary.