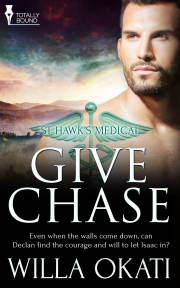 And once was all they’d had. Once seemed as if it was all that would ever be. They were what they were. Maybe Declan had the right of it, and maybe their separate paths never would fully merge into one.

And if that was the case… Well.

“You look like you’ve had a fun night. Anything interesting?”

Isaac glanced back over his shoulder to find Dr. Gabriel not quite hot on his heels, but making decent time. Not a lot of people ‘got’ their chief operating officer’s deadpan sense of humor, but he tickled Isaac’s funny bone. Gallows humor was a must for surviving the field of medicine. “And then some. The stories I could tell, God. You?”

Dr. Gabriel winced. Tall and built on stern lines, he seemed sober to most but once you knew how to read his small tells and giveaways, a world of expression opened up. “Teenagers out too late with booze.”

Isaac made a noise of sympathy. He’d been elbow-deep in the aftermath of that particular combination more times than he cared to remember. “Knife fight,” he offered. “And a baby with a fever of a hundred and two.”

“So, business as usual.”

“Pretty much.” The employees’ only side door of St. Hawk’s tended to stick and scrape in extra-cold weather. Isaac wedged the stubborn metal beast open, propped it with his hip, and stuck his head outside to drink down a deep draft of the icy January frost.

Mmm. Bliss. So good after a night running from trauma to trauma in the Emergency Department. Isaac draped himself over the door’s crash bar and hummed a deep, quiet moan.

Dr. Gabriel chuckled at the sight he must have made. “Enjoying yourself?”

“Only a little.” Isaac shivered with yearning pleasure as the cool breeze kissed his cheeks.

“Uh-huh. If I could please my dates ‘a little’ like that, I’d have the reputation of a sex god.” Dr. Gabriel made a show out of eyeing the gym bag Isaac carried, and the pair of athletic shoes tied together by their laces that hung around the crook of one elbow. A grin tugged at the corners of his mouth as he shook his head. “Running in this weather. Tch. Better you than me.”

Isaac hummed noncommittally as he savored the moment’s worth of standing still, letting the cold wash him clean. Declan was already waiting for him on the sidewalk outside, just like always. Every morning after every night shift since July, they’d gone for a run together. Isaac wasn’t sure if it was Declan’s way of keeping him at arm’s length but within his line of sight, or if Declan had another motive in mind. The man could be a mystery. Either way, Isaac enjoyed it. On a good day they were evenly matched. Though Declan had the long, lean legs of a natural runner, Isaac’s broader shoulders hinted at his deeper reserves of stamina.

Days like this, he felt as if he could run forever.

Thinking about keeping pace with Declan brought a frisson of heat back to Isaac’s blood despite the cold. This, yes. This was what he’d needed all night long.

Isaac blew out a breath. “Got me. I can let you know when I find out.”

“Better you than me,” Dr. Gabriel said. He clapped Isaac firmly on the back. “Tell him I’m still waiting for an answer about his spearheading the new family medicine committee, if you can remember that while you’re out there. Unless you’d care to take a look up at the sky, realize we’re about to get at least three inches of snow dumped on us, and come to the Whistle Stop for a cup of coffee like a sane person.”

“I’m not sure ‘sane’ enters into it.” Isaac returned the slightly too firm pat on the back with interest. “And I don’t think I could stop, even if I wanted to. When people say running is an addiction, they’re not wrong.”

He wasn’t wrong, for sure. Which was at least half of the problem. One taste wasn’t enough. Isaac wanted more.

I’m not sure what I enjoyed more about Give Chase – watching Declan “run” from Isaac or watching Isaac “chase” after him. I do know that I enjoyed the way that their relationship develop...

A delightful addition to the series, Willa. Declan and Isaac are both strong, stubborn men, intent on getting what they need, at any cost. Watching them fall in love was a joy! I really liked the f...

Share what you thought about Give Chase and earn reward points.

I’m a big fan of second chances. Mostly because—as often happens even with the best of folks—I screwed the pooch the first time around. Royally. I won’t go so far as to say that the Barenaked Ladies’ “Next Time” is my spirit animal, but it’s definitely in the ballpark. So I’ve jumped on second chances when they come, as they come. Sometimes I should have waited for the third boat, but it’s been an interesting ride.