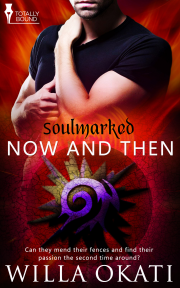 Book 1 in the Soulmarked series

Oh, this one was really good!

The writing was fantastic, and gave me a really good picture of both the characters and the setting. I was there in the moment with I...

A story of lovers bound by their soulmarks.

Willa Okati has an elegant amorour way with her words and Now and Then was an engaging read which kept me turin...

Share what you thought about Now and Then and earn reward points.

Some might have said that Robbie was a simple man, but that wasn’t quite the case.
He led a simple life, to be sure. No frills. He learned early on that what he knew about stealing cars he could put to use in fixing them instead, and he put his all into providing for the brothers he mostly raised by himself. He’d never minded grease under his fingernails, and the cracks on his palms and knuckles that came from hard work didn’t seem so bad—
When he had Ivan to help him patch them up.