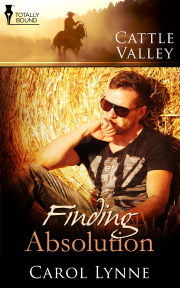 Book 29 in the Cattle Valley series

How can two men find common ground when one makes a living in the soil and the other in the surf?

Pressured by his friends, Kai and Quade, Van Duggins makes the trip from Oahu to Wyoming for the annual Cattle Valley Days celebration. Used to surfing every day, Van expects to be bored out of his mind without an ocean in sight. What he didn't expect was to meet a man who would change his life forever.

Raised by his grandparents, Jon Porter returned home after college to help his ailing grandpa take care of the family farm. He doesn't begrudge giving up his chosen career to help the man who raised him, but his situation has been hard on his love life.

For one week a year, Jon is able to break free of his responsibilities long enough to enjoy the Cattle Valley rodeo. It's his chance to be the man he was born to be, and he refuses to waste a second of it. When trouble finds him on his first evening at the rodeo, a stranger with long dark hair and a devilish grin rescues him.

How can two men find common ground when one makes a living in the soil and the other in the surf?

A sense of pride filled Van Duggins as his student, Kai Hachiya, accepted his first place trophy and cheque. It was Kai’s third win in four surfing tournaments, and Van was beginning to think he was no longer needed.

“Did Kai talk to you about Wyoming?” Quade Madison, Kai’s partner, asked.

“He mentioned it.” Van glanced at Quade. He hated to admit it, but he’d grown to really like the guy, and Kai definitely surfed better with Quade around. Unfortunately, liking Quade and following him and Kai to Cattle Valley didn’t go hand in hand. Never in his life had he been landlocked. The mere thought of not being able to see the brilliant blue of the ocean made Van’s stomach turn. “Not my idea of a vacation,” he mumbled.

“Maybe not, but you won’t know until you try it,” Quade replied.

“I won’t be able to breathe,” Van countered.

“You don’t have to worry about that, they have air in Wyoming, too.” Quade laughed and slapped Van on the back. “It would mean a lot to Kai if you joined us.”

“Funny, Kai told me it would mean a lot to you.” Van smiled. “So what’s the real reason you want me to go to this festival in the middle of nowhere?”

Quade took off his hat and wiped the sweat from his forehead. “I’m proud of Cattle Valley. I guess I’d just like to share it with you.”

Van had prepared an excuse to get out of the planned vacation, but he couldn’t get the words out of his mouth. Quade had been nothing but supportive of Kai’s training and career, and had rarely asked for anything in exchange. “I’ll have to leave right after the carnival or whatever it is.”

Quade chuckled. “Don’t act so thrilled.” He bumped shoulders with Van. “You probably won’t admit it afterwards, but you’re going to love the rodeo.”

“I’m starving,” Kai announced as he finally joined them. “I’ve got an interview in an hour, but I thought we could get something to eat first.”

“You aced everyone,” Van congratulated Kai.

Kai grinned. “I almost clucked on that last wave, but I remembered what you taught me and hit the lip perfectly.”

There wasn’t much that he hadn’t taught Kai, and the kid never forgot a single lesson. Before long Van would become obsolete to the man he’d grown close to. However, there was still one thing the beach rat had refused to get through his thick skull. “Language,” he warned. How many times had he explained to Kai that he hated slang?

“Sorry.” Kai broke away from Quade and wrapped his arms around Van. “I couldn’t have won without you.”

Van hugged Kai back. They both knew the truth, but the words were nice to hear. “You’d better get something to eat while you can.” He released Kai and took a step back.

“Aren’t you coming with us?” Quade asked.

Van turned his attention to the ocean. “I think I’ll go home and catch some waves while I still can.” He winked at Kai. “Not many of those in Wyoming.”

Kai’s handsome face lit up like Van had just given him the world. “Really? You’re coming with us?”

“I’ve decided I can’t go to my grave without seeing a rodeo.” Van settled his sunglasses down over his eyes. “When do we leave?”

“Wednesday,” Kai replied. “I booked you a seat just in case.”

With a nod and a wave, Van walked to his Jeep. He untied the leather thong that held his shoulder-length hair at the nape of his neck and headed out of the parking lot. Driving along the coast with the ocean breeze in his face always made him feel free. He’d spent the first eight years of his life in a depressing apartment on Central Park West in Manhattan with a mother who had little use for him outside the money she received monthly from his father.

Van had grown up believing his dad was a rich son of a bitch who cared nothing for him. It wasn’t until his mother had been invited to Europe for the summer with her newest lover and had informed Van that he’d be shipped off to Oahu to stay with his father that he’d met the man for the first time.

Turning down a dirt driveway, Van returned to the small cottage hidden behind years of brush and trees. The house his father had owned and the only place in the world Van had found true love and acceptance.

It had become clear on his first visit to Oahu that his father wasn’t the rich man he’d thought him to be. Instead, Jimmy Duggins had worked two jobs, grown his own food and lived in a house that had barely been more than a shack at the time in order to pay the large sum of child support Van’s mom had demanded.

Smiling at the memory of his dad’s broad grin the first time they’d met, Van parked in front of the house. He’d done a few renovations since he’d first set eyes on the beach shack, but the hanging wind chimes and folk art were one hundred per cent original. Christ, he missed that man. Everyone on the island had called Van’s father Jimmy Jam, and despite working two jobs, the seasoned surfer had taken the time to teach Van everything he knew about the island, the ocean and what it meant to be a man.

“I’m going to Wyoming,” Van said to the house. At his father’s request, Van had cremated his dad’s body after he’d passed and sprinkled the ashes around the yard and on the beach, making the whole damn place his forever. “Did you ever think you’d see me at a rodeo?” Van had refused to admit it to Quade, but the more he thought about going to the competition the more excited he became.

Van got out of the Jeep and headed straight to the back of the house. He stripped out of his clothes and grabbed a pair of board shorts from the clothesline. The true beauty in the shack’s location was the isolation, something he’d grown to crave when he was away from it.

The row of surfboards that leaned against the house like ancient warriors were a daily reminder of his past. He ran a hand over the pale yellow board his father had favoured before taking a moment to stand in front of the expensive board his ex-student and lover, Blain Hardesty, had given him as a thank you.

Blain. Van wrapped his arms around the longboard and rested his cheek against its smooth surface. Not a day went by that he didn’t miss Blain. Many in the surfing community still blamed Van for Blain’s death, and there were days when he agreed with them. The day before the tournament, Van had been forced to tell Blain he wasn’t good enough to perform the Duggin’s Slide, a manoeuvre Van had made famous when he’d competed on the circuit. A huge fight had erupted between them and Blain had stormed off to the bar. When Blain had arrived for the tournament, he was still suffering the effects of the alcohol he’d poured down his throat. When Van tried to argue that Blain was in no shape to surf, he’d been summarily fired and told he was a washed-up surfer who didn’t want to share the limelight. Hurt and angry, Van had let loose a steady stream of profanities before storming off.

Van gasped for air as the memories threatened to choke him. Blain had died eight years earlier and there still wasn’t a night when Van didn’t reach for the younger man in his sleep.

Hell, maybe he could use some time away from the water, the memories. He released his hold on the longboard and tucked the ugliest board in the bunch under his arm. His father had given him the competition board when he’d realised Van’s potential.

Van jogged to the water. He paddled out and turned his board to face the shack. The solitude his home offered had always done a better job of calming him than all the expensive shrinks he’d gone to after the tragedy that had taken Blain’s life. He wondered what would ground him in a town without an ocean.

Share what you thought about Finding Absolution and earn reward points.