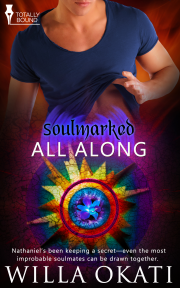 Book 5 in the Soulmarked series

Nathaniel’s been keeping a secret—even the most improbable soulmates can be drawn together.

Nathaniel, youngest of the brothers, has been keeping a secret. He knows the identity of his soulmate, but he hasn’t told anyone—because it’s not just impossible, it’s improbable. No one has more than one soulmate in a lifetime, but his new mark has drawn him to Abram—a widower who had, and lost, his mate long ago. It cannot happen, and yet it has…and Nathaniel’s falling in love, fast.

Abram is charmed by the adorable amber-eyed man, but not fooled. Falling for Nathaniel would be a one-way ticket to Heartbreak Hotel. Abram’s twenty-five years older, and he’s had his time with his soulmate. He knows there are no second chances, but every time Nathaniel enters his life, he wins another piece of Abram’s heart. Even if Abram knows better, he’s beginning to wonder if dreams can come true.

Or if miracles might just have been real all along.

The day the coliseum opened

“Nathaniel.” A rough, gentle hand on Nathaniel’s shoulder jostled him out of a deeper sleep than he usually enjoyed. “Nathaniel? Time to get up.”

Nathaniel stirred, pressing his cheek against the soft, rumpled cotton of his sheets. He blinked once, then twice, as he knuckled under his eyes. “What time is it?” The room seemed as dark as midnight, but that couldn’t be true if Robbie was shaking him out of bed.

“What?” Nathaniel shook his head. “That can’t be right. My alarm’s set for six.”

“Must not have gone off.” Robbie clumsily yet affectionately, tousled Nathaniel’s hair. He’d all but raised Nathaniel from childhood, but he never had gotten much polish to his manners. Nathaniel didn’t mind. He liked Robbie best the way he was, and he knew Robbie understood that without having to ask—or be told.

He knocked his shoulder against Robbie’s leg to say thank you without speaking aloud. “Give me a minute.”

“Sixty seconds and not much more, or you really are going to miss your bus,” Robbie warned. Then added, “I’ll start some breakfast going for you. Just this one time.”

Nathaniel rubbed sleep from his eyes, blinking at Robbie as his oldest brother made his exit. He was a good man—Robbie—though he probably wouldn’t have described himself that way—a good man with a kind heart underneath the layer of gruff.

Oof, but Nathaniel’s head didn’t like the idea of him moving around. A light ache thrummed at his temples like an over-tight guitar string given a hard pluck.

Maybe I’m coming down with something, he mused sleepily, still disinclined to crawl out of his nest of cozy blankets and soft flannel sheets. Such was the common fate of a public librarian, out there where germs crawled over sticky hands and soared merrily through the smoggy city air. His brothers called him a kitten, teasing, for his love of snuggling down into warmth wherever he could find it, but today the bed almost demanded he curl up with his head under the pillow and rest.

No could do, though. He had his share of the rent to pay, even if Robbie muttered and grumbled about taking his money every month. Nathaniel pushed back the light, fluffy weight of his duvet and swung his legs over the side of the bed. Oof. He’d give himself an A for effort, but would have to take away five points for stopping there to massage his temples.

Honestly, now. He didn’t even drink, except on holidays. Something must be up. He stretched then kneaded his joints to work out the kinks. He—

Wait. What’s this? Nathaniel tried to blink away the morning fog in his eyes to peer down at the cap of his shoulder. He’d felt a strangely rough patch beneath his fingertips.

“Look who slept in for once!” Cade crowed, his only warning before he landed on Nathaniel’s bed with a teeth-jarring thump. Far less gentle than Robbie by nature, he grabbed Nathaniel in a headlock and scrubbed his knuckles over Nathaniel’s scalp.

Nathaniel had been made slender as a willow tree by the hand of Mother Nature, but he had more strength in his limbs than people gave him credit for—especially Cade. He pushed at Cade with an indignant yelp, getting him a good one in the ribs. “Stop it, you bastard.”

“That’s a nice thing to say about our parents,” Cade retorted, sounding slightly winded. “Damn. Who taught you to use your elbows like that?”

“Details, details,” Cade said, dismissing that. “Let me get a look at those guns, though—whoa.”

Nathaniel crossed his arms in a flurry of instinct and indignation. “I said stop, Cade!”

Cade didn’t make a move toward him. He sat as still as a scarecrow, his eyes wide and surprised.

He should have saved his breath. “Was that a soulmark?” Cade demanded, breaking his startled stillness to make a grab for Nathaniel’s shoulder. “Since when do you have a soulmark? Who is it for?”

At least he kept his voice low, a hot-rushing whisper. Nathaniel started to reply—then stopped himself. The new soulmark—for a soulmark it was—almost hummed beneath his fingertips. As best as he could tell, it was shaped like an iris nearly ready to open—both the flower, and the eye, somehow both at the same time. He could have said so, but oh no. Give Cade an inch, and he would take not one, but two, miles.

“None of your business,” he said instead of the I don’t know that he’d meant to answer with.

Then he groaned on the inside. He did know better than that. No chance on earth Cade would leave it alone now.

“I mean it,” Nathaniel said anyway, standing up and making a grab for a blanket to drape around his shoulders. He did that often enough that Robbie shouldn’t guess anything was out of the ordinary. “And don’t you dare tell anyone. Understand?”

Well, it was worth a try, at least.

This is a rather short story but very well written.  The words practically flowed off the page.  Descriptive enough to draw an amazingly clear picture in my head but not so flowery that it becam...

Two sexy men, lots of passion and innocence, a bit of excitement and a touch of pain. I can’t wait to read the next book. I want to hear more about these amazing characters.

Share what you thought about All Along and earn reward points.

Okay, so: standard disclaimers apply. Labels don’t work for everyone. One size absolutely does not fit all. Hell, two sizes don’t fit all—and that’s pretty much the point here.

I used to think I was broken.

Then again, I suspect most teenagers do. It’s the culture we live in, and hormones don’t help. But let’s turn on the way-back machine and head to 1993.