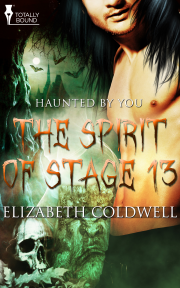 The Spirit of Stage 13

Haunted By You collection (Book #2)

Evin thought the ghosts of old Hollywood were only a myth…until he stepped on to Stage 13, and discovered that even spirits need to be loved…

Struggling screenwriter Evin has had his latest pitch rejected and is in search of that elusive break when he strays on to Stage 13 at Monument Studios, the setting for a famously cursed film production of Macbeth, now only used for storing props. Certain he's not alone on the deserted stage, he finds himself in the presence of Jack, a hot young actor who died on the Macbeth set.

Jack believes he's destined to stay trapped within the stage set till he meets the man he's destined to spend the rest of his life with, and that the one thing he needs to do in death that he never did in life is experience mindblowing sex. Evin is only too happy to help Jack make his fantasies come true, falling hard for the spectre in the process, but can love really prove to be stronger than death?

The noises startled Evin awake some time after one in the morning. A low, rhythmic banging, accompanied by rattling metal and the unearthly moans of a soul in pain.

When it had happened for the first time, he’d sat bolt upright in bed, wondering what the hell he was hearing. The apartment building he lived in was the best part of ninety years old-positively prehistoric for Los Angeles-and anything could have happened within its walls. Maybe some wizened spectre walked the hallways, doomed to drag his chains behind him for eternity. Evin had shivered as the moans had grown louder, pulling the bedcovers over his head.

Then he’d made out, muffled but still audible, the words, "God, baby, you’re the best," and had realised what he was actually listening to. Not a ghost, after all, but a flesh-and-blood lover screaming out his pleasure as he came, along the way reminding Evin the only thing that had died and gone to hell round here was his love life.

He’d known exactly who the lucky bastards were, fucking up a storm on the other side of his bedroom wall. They’d moved into the building a couple of months back, taking on the apartment when old Mrs Brook had died. Ever the good neighbour, Evin had helped them carry in their boxes of belongings, learning in the process that they were moving in together three weeks after meeting at a bar just off the Strip. Gilson worked as a personal trainer in a gym at the corner of Sunset and Vine, his body a perfect advert for his services, with its broad, muscular chest and prominent biceps. His boyfriend, Red-Evin still hadn’t learned the guy’s real name, but it seemed no one ever called him anything else, thanks to his striking mop of carroty curls-tended bar at a five-star hotel in West Hollywood. From the looks they’d given each other and the way Gilson’s big hand had patted Red’s arse as they’d stood talking to Evin, he’d gathered they were very much in the stage of their relationship where physical need was constant and all-consuming.

They’d confirmed that practically every night since then, fucking into the early hours while Evin lay in his bed, listening enviously as the metal-framed bed banged against the wall and the lovers yelled in bliss. Other people might have been able to roll over and bury their head in the pillow, oblivious to the sounds of hot and heavy sex coming from next door, but Evin had always been a light sleeper. Once he woke, it took forever to drift off again. His mildly insomniac tendencies, coupled with the vivid imagination that drove his burgeoning career as a screenwriter, led him instead to listen in, speculating on just what Red and Gilson might be doing to each other.

Tonight, he couldn’t prevent his hand snaking down to clasp his cock, brought to sudden hardness by the filthy soundtrack that claimed his attention. He might have a meeting over at Monument Studios early in the morning, but he knew he wouldn’t get back to sleep till his neighbours had finished their energetic-and highly audible-performance. He’d quickly established that Red was the talker, constantly praising Gilson for his big, hard dick and clever tongue action. Red liked to be sucked, that much was clear, and from the way he groaned and the bed clanked as he called out how he needed to have his cock buried deep in Gilson’s hot, wet mouth once more, Evin knew he was unable to dictate the action at the moment. Maybe he’d been bound by his wrists to the bed rail.

The thought created a delicious image in Evin’s mind. Red lying there naked, body slick with sweat, cock sticking rigidly up from the patch of ginger hair at his groin. Gilson would be looking down on him, a half-smile curving the corners of his full lips upwards as he watched his lover begging to be sucked till he came. Maybe Gilson would bring those wet, slightly parted lips right to the head of Red’s dick, so close Red could feel his hot breath huffing over his love-eye, taunting him with the promise of swallowing him down once more. Then, laughing, he’d pull back, leaving a frustrated Red to hump his hips at thin air. Evin didn’t know why it turned him on so much to think of Gilson as the dominant partner and Red as submissive-logic dictated it could just easily be the short, wiry Red taking control of his physically more powerful boyfriend-but he played the scene out that way as he pumped his fist steadily up and down the length of his cock. He imagined Gilson bringing Red to a stage where the helplessly restrained man promised he’d do anything, if only he would give him the satisfaction he craved. Only then would Gilson take mercy, wrapping his lips round Red’s swollen pole and sucking till Red’s pelvis jerked convulsively half a dozen times and his cum gushed, thick and salt-sweet, down Gilson’s throat.

Share what you thought about The Spirit of Stage 13 and earn reward points.

Who doesn’t enjoy a good scary movie? According to a group of Harvard mathematicians, “Do you like horror movies?” is one of the three questions you need to ask a potential partner to find out if you’re compatible. (The other two, in case you’re interested, are, “Have you ever travelled around another country alone?” and, “Wouldn’t it be fun to chuck it all and go live on a sailboat?”) If you both give the same answers to two out of the three questions then you can look forward to a long and happy life together. At least, that’s the theory.