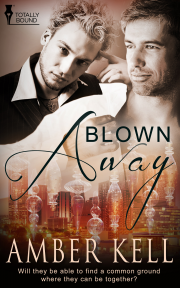 Sometimes love finds you before you think you're ready.

Chris Garland's love for glasswork encompasses his life. Between school and working as a concierge at The Melia Hotel, he doesn't have time for anything else. However, when he sees the handsome stranger sitting in the hotel lobby, he can't resist introducing himself.

Leo Abbott lost the love of his life two years ago and has yet to recover. Flying to Atlanta for his cousin's wedding, he couldn't help but think of his dead lover. When the hotel's concierge checks on him in the lobby and introduces himself, Leo feels the first stirrings of attraction. Passions he thought long buried flare back to life.

Will two men from separate walks of life be able to find a common ground where they can be together?

Publisher's Note: This book has previously been released as part of the Unconventional in Atlanta anthology by Totally Bound Publishing.

Christopher spun the blowpipe, slowly gathering up globs of molten glass from the bottom of the furnace. With practiced ease, he collected the proper amount of glowing material for the vase he visualised in his mind. The beginning of a piece always filled him with the tingle of anticipation, like meeting a sexy guy at a club and trying to calculate how quickly he could strip him down. When working with glass, his finished art never quite matched his initial idea. Sometimes the glass spoke to him and he had to follow where inspiration guided him. Humming happily, Chris watched the growing sphere at the end of his pipe. Now he was ready for the next step.

Despite the protective shield, the heat from the furnace set at around one thousand, one hundred and fifty degrees Celsius blasted across Chris’ face. Sweat poured off his body, soaking into his shirt as he smoothly slid his pipe from the searing heat. Mindful of the sudden weight, he carefully lifted the rod off of the stand and moved it to the next station.

He hoped his friend appreciated all the effort. With college tuition and fees for glass making Chris’ pockets lighter by the second, he didn’t have tons of money for gifts. However he knew Amanda loved his work and he wanted to make something just for her. He could’ve just grabbed one of his already finished pieces, but Amanda had helped him through a bad breakup a few months ago and he thought she deserved a special present.

Carrying his prize over to the metal table where he’d laid out the frit, Chris gently rolled his soft glob over the tiny pieces of coloured glass, embedding them into the material in one smooth motion. After covering all sides he smashed the bottom into the table to collect frit on the bottom. It looked a bit like a caramel apple rolled in sprinkles when he finished. Chris smiled at the analogy. He loved sweets.

Walking over to the glory hole, he settled the blowpipe in the metal support then opened the glory hole with one hand. Scooting back he pushed the quickly cooling glass into the hot oven and spun it around in a slow, steady rhythm, making sure to not leave it in one position for too long. If it overheated, the entire piece could melt off the pipe and end up a blob on the bottom of the unit. The shop owner hated it when that happened and Chris would prefer to avoid a lecture.

This makes a great love story.

There is so much passion and tenderness that you just hold your breath for the next move.

When you first start reading, you are captivated and c...

Share what you thought about Blown Away and earn reward points.