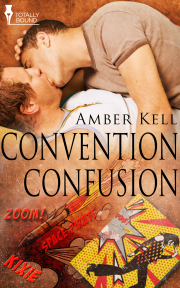 Dressing up as a girl can sometimes win you the man of your dreams.

Billy Ferris has adored Jennvian Fellows comics since he read the first edition. When the chance to meet the illustrator comes up he accepts his friends help to dress as his favourite character, space pirate female Kixie.

Little does he know that Jenn not only prefers men but is looking for the mate of his dreams to take back to his home world.

Will Billy be able to show his true self and capture the man of his not-so-pure dreams.

Reader Advisory: This story has been previously released as part of the Unconventional At Best anthology by Total-E-Bound

"Are you sure I need this much makeup?" Billy Ferris asked. Cathy Adams rolled her eyes as she slicked on another layer of eyeshadow across Billy’s lids. "Like I told you before, if you want to look like Kixie you need thick makeup." Billy squinted at her through the thick mascara. "I think you just like to put makeup on me." "If you don’t want to look convincing for the conference or when you meet Jenn..." She let the words hang in the air. Rolling his eyes, Billy settled back into the desk chair they’d pulled from the hotel room’s living area into the bathroom. He had worked hard to make his costume perfect. He adored the new Space Girl series and the leader in the comic, Kixie Spacefarer, looked almost exactly like Billy in drag. Of course, Cathy would’ve been the first one to notice and insist on dressing him just like Kixie once they’d announced the creator of Space Girl would be at the Sci Fi convention. Billy had a major crush on Jennvian Fellows, the comic’s creator and now executive producer of the television show. "You’re going to look so great he’ll think you’re his dream come true." Cathy smiled as she continued to add more makeup. "To get you perfect I need to make your eyes look bigger and I can only do that with more eyeliner than any self-respecting prostitute would wear." Billy’s stomach had aggressive, dive-bombing butterflies and he kept swallowing to hold back his urge to hurl the powdered donut he’d eaten earlier. Damn those sugary carbs. "Thanks for helping, Cath." As much as he bitched about the thigh-high latex boots and the tight corset top, he wouldn’t have been able to do it without his friend helping out. "No problem, honey, you helped me get Gil’s attention last year, the least I can do is return the favour." Billy didn’t know how much of a good thing setting her up with Gil had turned out to be. The guy could be a major butt wipe if he didn’t get his way. The only reason Cathy could help Billy get ready was because Gil had an out-of-town business trip. He wisely kept his opinion to himself, not wanting to endanger their friendship by sharing his views of Gil with his love-struck friend. "Anyway, I do appreciate it." Cathy swiped a line of lip gloss across his lips. "You’re welcome, hon. There! All done. Go look." Stepping away to let Billy stand up, Cathy all but bounced as she waited for his reaction. Billy gave her an indulgent smile as he stood up to get a better look in the bathroom mirror.
Buy Now

Share what you thought about Convention Confusion and earn reward points.