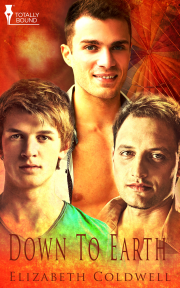 When Ryan's life comes crashing down, can the hottest nurse he's ever met help put it back together again?

It started out the happiest day of Ryan Johnson's life. At breakfast, his long-time boyfriend Craig accepted his proposal that they enter a civil partnership, and in the afternoon he's making a parachute jump—a surprise organised by his new fiancé. But when his chute fails to open, experienced skydiver Ryan finds himself in the hospital, in traction and not going anywhere for a while…and everything starts to fall apart.

High-maintenance Craig doesn't seem to want to be there for him anymore, but down-to-earth Luke—the hottest male nurse Ryan has ever seen—is determined to help him make a full recovery…and maybe even win his heart in the process…

Reader Advisory: This story has been previously released as part of the Emergency Servicing anthology by Totaly Bound Publishing.

If you like stories about less than perfect characters who, just in real life, make mistakes and give in to temptation, and if you're looking for a hot read with a mix of fantasies and real-life encounters,...

Share what you thought about Down to Earth and earn reward points.