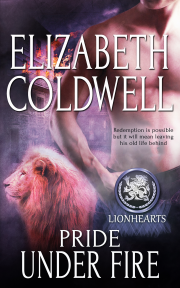 Book 5 in the Lionhearts series

Will their passion burn out of control?

Connor Wabsik’s career as a firefighter is on the line after he punched out his commanding officer. Redemption is possible in the form of a move to a sleepy California mountain town, but it will mean leaving his old life behind. What he doesn’t know is that his destiny waits for him in Riesgo. Fate has paired him with a human mate, Andy McGuire—a man with secrets of his own. Connor is fighting to protect the town from a dangerous firestarter. When Andy’s life is threatened, will Connor be able to keep him safe, too?

Detective Andy McGuire is unlucky in love, but when he meets Connor, the handsome new recruit to the Riesgo Fire Service, things start looking up. How can he stop a serial arsonist from destroying everything he holds dear? And as passion threatens to burn out of control between him and Connor, what will happen when Andy learns that the man he loves might not be what he seems?

Connor walked toward the bed, unbuttoning his shirt as he went. The man who waited for him there licked his lips as Connor tossed the garment to the floor, revealing his broad, tan chest.

Late afternoon sun warmed the bedroom. Through the window, Connor caught a glimpse of a pretty, white-painted clapboard church with a high steeple. Trees surrounded it, their leaves thick and green. The tranquil countryside scene was so different from the view out of his own apartment, which looked onto one of Santa Monica’s busiest streets.

“You live in a beautiful place,” he commented.

The man shrugged. “True, but I didn’t bring you here to admire the view. Well, not that one, anyway.”

Connor grinned. “Don’t get impatient.” Still, his companion was well worth a few moments’ admiration, with that killer combination of dark, glossy hair and soft blue eyes. Things had moved so fast. It seemed no sooner had Connor walked into the bar than he and this guy—had they even gotten as far as exchanging names?—were deep in flirtatious conversation. He didn’t normally go out looking to hook up with someone for sex, but tonight it had just felt right.

The chemistry between them was intense. Every time they’d made eye contact, Connor’s groin had tightened a little more. By the time they’d walked out onto the street, Connor enjoying a pleasant buzz from the beers he’d been drinking, it had become obvious the evening was only going to end one way.

He’d accepted the invitation to go to the guy’s home without a second thought. Even though he was new to this town, he instinctively knew it was the kind of place where bad things didn’t happen. This handsome stranger wasn’t going to turn out to be an axe-wielding maniac who intended to add Connor’s head to the collection in his cellar.

They’d kissed for the first time on the doorstep—a hot, sloppy meeting of mouths that had conveyed just how badly they wanted each other.

“Let’s get inside,” his companion had said when they’d finally broken the kiss. While he had been attempting to push the door key into the lock, Connor had nibbled his earlobe, not caring that it made the man’s task harder. At last, they’d staggered inside.

The house was built on one level, like most of the properties they’d passed on the short walk from the bar. The guy had dragged Connor down the hallway and into his bedroom. They’d carried on kissing, but Connor had been distracted by his need to take a leak.

When he’d returned from the bathroom, it was to find his new friend under the sheets. The clothes lying on the floor by the side of the bed made it obvious the guy had stripped in his absence.

And now Connor was undoing his jeans. They slid down around his ankles. He stood still to remove both them and his sneakers, not wanting to get tangled in the worn denim, trip over and land on his ass. Naked, he went to sit on the edge of the bed. He pulled the sheets away, getting his first glimpse of the guy’s hard, uncut cock. The lack of any tan lines suggested Connor was with someone who liked to sunbathe in the nude, most likely in the secluded back yard he’d noticed out of the window.

“Well, I don’t need to ask if you’re ready for me,” Connor quipped. He gripped his companion’s shaft by the base then started to run his fist up and down. The thick length felt good in his hand as he jerked it.

“Oh yeah, that’s what I needed.” The guy’s eyelids were closed, his expression blissful. He sprawled against the pillows, relaxing into Connor’s caresses.

Connor ran his thumb over the plump cockhead, coating it with the slippery liquid that issued from its tip.

“You know what I’d like?” he said, his keen hearing attuned to the sound of his friend’s harsh, excited breathing. “To stick my dick all the way up in your ass. D’you want that, too?”

“You’ve got condoms?” he enquired.

The guy didn’t even bother to open his eyes, just nodded and murmured, “Mmm-hmm.”

He was about to ask where to find them until he spotted the carton on the nightstand. It stood next to a bottle of lube and a box of tissues.

There’s nothing like being prepared, whether you’re having fun on your own or with someone else…

He let go of the cock in his grip, chuckling at the little groan of disappointment his action provoked.

“Hey, if I’m not touching you, you can always touch yourself…”

The guy took him up on the suggestion, tugging at his hard-on while Connor took one of the condoms out of its foil package. Once he’d put it on, he sat down once more and urged his companion to roll over onto his front.

Connor smoothed his hands over the upraised ass cheeks before him. Nothing grabbed his attention more than a nice, tight butt.

He picked up the bottle, then popped open the cap to be greeted by the scent of cherries. Cute. Having squeezed some onto his fingertips, he started to apply the lube to the guy’s puckered opening.

Soon, the little hole grew loose enough that he was able to push a finger inside, all the way up to the second knuckle. Connor’s cock twitched, betraying his eagerness to be buried deep in that slick passage.

Even if he’d wanted to hold back, he couldn’t resist that urgent request. Connor climbed on top of his lover, urging him to spread his legs wider. He lined up his cock with the guy’s hole, then pushed in. There was a brief moment of resistance, nothing more. He sank deep, relishing the sensation of being lodged in another man’s ass.

Their coupling was fast, furious. Connor didn’t have time for soft words or gentle thrusts. He just needed to get himself—and his friend—off. He pumped in and out, moving his hips in a steady back and forth rhythm and enjoying the delicious friction of each stroke. Beneath him, the man wriggled against the mattress, clearly getting close to his own orgasm.

Connor pushed harder, oblivious to everything but his own need to come. He breathed in the mingled aromas of cherry and pure male musk. He grabbed a fistful of his lover’s hair, pulling his head back sharply. The man cried out, more pleasure than pain in the sound. His asshole clenched tight around Connor’s cock and Connor knew he’d reached his peak.

It was enough to trigger his own climax. Every sinew straining, Connor shot his seed into the condom in sharp bursts. Then he slumped forward, drained.

A long moment passed before he was able to move again. With an effort, he managed to roll off the man’s body.

Pride Under Fire is one of those unique and fun shifter stories that just keep you on the edge of your seat. This is one of those books that you just cannot stop turning the pages to find out what...

If you enjoy watching two strangers fall into lust, then love, despite the distractions of real life they have to face, if you think that an exiled lion shifter and a man disappointed by love deser...

Share what you thought about Pride Under Fire and earn reward points.

When you're plotting a novel, one of the things you have to establish early on is the profession of the main character. Sometimes, the plot springs organically from the hero or heroine's job, while other times what they do for a living may be a requirement of a submissions call.