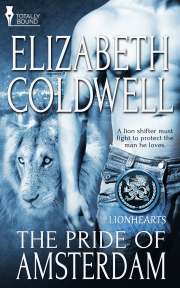 This was a thrilling who-dunnit type of book. The author left little clues as to who was sabotaging Arjan's company. The hunter was harder to pick and I was honestly surprised when I learned who it wa...

This was a good read. The sex scenes were fire hot steaming. And there was quite a bit of it but not so much that it saturates and ruined the storyline. I liked the book. The series seems like it...

Hi Penny, and thanks for giving me the opportunity to sharethe thoughts of the gorgeous Dutch lion shifter who’s at the heart of the mystery in The Pride of Amsterdam, Arjan de Wit. Arjan is a successful businessman who runs his own computer software firm but he’s also carrying a few secrets that could make or break his relationship with his human mate, Kees.

Elizabeth: Hello, Arjan. It’s nice to meet you.
Arjan: Goedendag, Elizabeth. I hope you have some interesting questions for me.

Elizabeth Coldwell - Author Spotlight for The Pride of Amsterdam

You have a variety of pairings and genres in your back-list. Which is your favourite?

I honestly don’t know if I could choose a favourite, which is why I can’t stick to one genre. Some ideas just seem to suit a particular genre and it just felt right to make the Lionheartsbooks male/male. But I have plans to take some of the secondary characters from one of the books and give them their own paranormal adventure, which will be an m/f story.