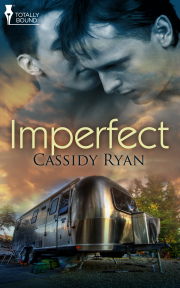 They say the brightest lights cast the longest shadows. Zach thinks Logan's been living in that shadow long enough, but can he convince him he deserves to stand in the light?

Detectives Zach Gibson and Logan Armstrong are partners, friends, and something more that they've never analysed or put a name to. But it works for them. For now.

When Zach's grandfather asks them to investigate the theft of a ring from the finger of his recently deceased friend, it opens a can of worms Logan has been struggling to keep closed for ten years.

Secrets, guilt and revelations come tumbling out, and Logan is forced to finally deal with events from his past that have kept him emotionally bound and unable to move on.

“I want a new partner. I can’t work with this lunatic a second longer.” Detective Zach Gibson burst through the doors of the Serious Crime Unit, letting them swing closed in the face of his partner, Logan Armstrong. Anger poured off him in waves as he strode across the bullpen. Anyone who happened to be in his way quickly remedied that.

Zach heard the doors open again and was aware of Logan falling into step behind him, but he didn’t pause until he reached the door to the captain’s office. He rapped his knuckles against the glass before pushing the door open and entering.

“I want a new partner.” He stopped in front of his superior’s desk, refusing to look at Logan when he moved to stand next to Zach.

Captain Grace Evans sat back in her chair with a sigh, dark blonde eyebrows pulled together in a frown. “You know, when I took over here and said I had an open door policy, I really meant it. Then I met you two. Now, not only do I want to close the door, I want to barricade the frickin’ thing. What the hell is wrong this time?”

Zach crossed his arms over his chest and jerked his head in the direction of his partner. “I can’t work with this guy anymore. He’s...he’s unhinged.”

Zach didn’t have to look at him to know the damn man was smirking. “Don’t even start with me, Armstrong. I am this close to decking you myself.” He threw Logan a narrow-eyed look before turning back to tilt his head expectantly at Grace.

“Gib...” Logan started, but she held up her hand and he subsided.

“Just tell me what’s got your panties in a bunch, Gibson. Maybe we can fix this and get you two the hell out of my office before I have an aneurysm.” She leant forward, picked up a letter opener and began tapping it against her manicured fingers.

Zach dropped his arms to his sides again, but far from relaxing, his hands clenched and unclenched. “We spent all morning doing the last of the paperwork on the Naismith case, so we decided at around two-thirty to go out for coffee—you know, stretch the legs, get some fresh air. The way ordinary people do.” He dragged a hand through his blond hair, not for the first time, and suspected it was probably standing on end.

Still frowning, she nodded and made a motion with the letter opener to get on with it.

“Yeah, well, I guess I forgot for a split second that my partner here isn’t like ordinary people. He can’t go out for a cup of fuckin’ coffee without finding some havoc to get caught up in.” Zach’s pulse picked up as he spoke, and he could feel the heat of an angry flush rising at his throat.

“Hey!” Logan interrupted, an edge of annoyance in his voice. “That guy was a douche, what did you expect me to do? Ignore the fact that he was beating on some kid so that you could have your vanilla hazelnut latte?”

“Fuck you! I don’t drink that shit and you know it,” Zach bit out, turning so that he and Logan were face to face, both of them practically vibrating with anger. “Of course we had to do something, but jumping onto the hood of a moving car in the middle of heavy traffic?”

“He was getting away!” Logan’s eyes were bright and his cheeks flushed.

“So you jump on the hood of the car? Seriously?” Zach took a step closer as he spoke, breathing hard.

“Wait, you jumped on the hood of a car?” Grace interrupted. She looked a little stunned.

Zach knew his smile was smug, but he didn’t care. “Yeah, see? Unhinged.”

Imperfect packs a solid little punch in 58 pages...if you like great characterizations, witty dialog, hot love scenes with two hunky police officers, then Imperfect is the book for you...

...a fast paced and intriguing little novella...the author did a nice job developing their unique personalities...a quick and entertaining read...

Share what you thought about Imperfect and earn reward points.