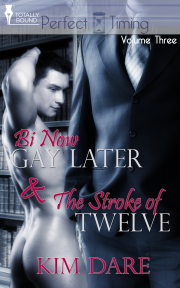 Can a bi submissive really find happiness with a master who doesn't believe bisexuality exists?

Jerry would be Denton's ideal submissive if only he would just get his last foot out of the closet and admit he's properly gay. Denton loves Jerry, but he knows it's a master's responsibility to make sure his submissive doesn't lie to himself or the rest of the world. He can't let Jerry hide behind the bi-sexual label forever.

Jerry has no doubt that he's one-hundred percent bi-sexual. He's also well aware how much his master hates that fact. Jerry loves his master and he wants to please him, but he can't lie and say he's gay when he knows he's not. Denton would be Jerry's ideal master, if he could just accept the fact he's bi.

Eventually, somebody's going to have to give in and admit he's wrong. The only question is who?

On the stroke of twelve Devon belongs to him for one hour. One hour that will change the course of his life forever.

Free of responsibility and provided with an independent income, Devon Ashford floats through life thinking only of where the next party might be. When a note orders Devon to present himself at Templeton, Crawford & Associates at noon on Wednesday, he's curious enough and bored enough to follow the order.

He doesn't know what to expect when he arrives, but it's not to be told that on the stroke of twelve, he'll belong to the stern man on the other side of the desk for exactly one hour. He doesn't expect anyone to command him to strip for an inspection. Nor does he expect to follow the orders of a stranger. He certainly doesn't imagine he could like doing that enough to go back for more.

Whatever he expects, Devon's about to discover that what happens at the stroke of twelve could change the course of his life forever.

“Do you reckon he spends a lot of time thinking about having sex with women?”

Denton Greenwood’s lips quirked into an amused little smile as he turned to his friend. “I have no idea who you’re talking about. But, since we’re in a gay bar, I’ll go out on a limb and guess that no one in here spends a lot of time thinking about doing anything with a woman.”

Denton’s fingers tightened around his glass as his eyes automatically sought out a blond head of hair in the crowd. Someone stepped to one side. Jerry came into view. “He’s not bi.”

Denton clenched his jaw as he watched Jerry nod his agreement with whatever the man standing next to him was saying. “He’s gay.”

Peter shook his head. “He says he’s bi. He should know.”

“I am his master,” Denton snapped. “I know which way my lover swings, and Jerry is as gay as any man in this bar.”

Even on his eighth pint, Peter seemed to realise he’d hit a nerve. “How’s it working out between…?” he trailed off.

Denton continued to watch his lover speaking to some of his friends, all of them other collared submissives, on the opposite side of the room.

“Everything’s fine,” he snapped. It didn’t sound like it when he bit the words out like that, but it was the truth.

In the months since Jerry had come under his protection, the younger man had turned out to be a damn near perfect match for him.

“He seems to have come into his own since you gave him his permanent collar,” Peter offered.

Denton nodded. That was true too. He’d never guessed that the stunning, if rather tentative, submissive who had first come to his attention would thrive so well under his rules and discipline, but Jerry had a way of wrapping rules around himself as if they were a comforting blanket, and taking every limitation his master put upon him as a gift. And, more than any of that, he had a way of throwing himself so wholeheartedly into his submission that the idea of letting him go had quickly become unthinkable.

As loath as Denton was to act soppy for anyone, even Jerry, he could just about admit that the submissive was the only one of his lovers he had ever actually fallen in love with. As long as they were alone and not doing anything overtly romantic at the time of any such admission, of course. A dominant had to hold on to some sort of standards. He wasn’t so far gone that he was willing to shout it from the roof tops or let heart toting teddy bears worm their way into his life.

Denton held back a sigh. Damn near perfect, was all well and good. But knowing his lover could be completely perfect if he would just admit he was gay just made it all the more difficult to accept the younger man’s stubborn insistence that he was bisexual with every day that passed. To feel perfection there, waiting just out of his reach, it was like a persistent itch at the back of Denton’s neck.

“At the stroke of twelve on this day, and on every Wednesday from now on, you will belong to me for one hour. Understand?”

Devon Ashford blinked at the man sitting on the other side of the desk. “What?”

“The appropriate answer is either ‘yes, sir’ or ‘no, sir’,” the older man informed him. “Answer the question. Do you understand?”

Devon gave a mental shrug. Okay, so the guy was kinky. He was also as hot as hell. For a man who looked like that, Devon was willing to learn to live with kinky. “Okay.”

The guy just stared across the desk at him.

Devon shuffled his trainers on the richly patterned rug. Kinky was fair enough, but standing in front of the big mahogany desk made him feel like he was back in school, in the headmaster’s office and waiting to be told how many hours he’d be sent to detention for. He pushed his hand through his hair, shoving the thick blond strands out of his eyes.

Finally, he realised what the other man was waiting for. Devon only just resisted the temptation to roll his eyes. “Yes, sir.”

The guy nodded, just once, as if to show he’d heard. That was it.

Devon pushed his hands into his jeans pockets and rocked back on his heels. At any other time, he wouldn’t have thought twice about striding quickly around the desk to make his intentions perfectly clear. With any other man, he wouldn’t have hesitated to straddle him in his fancy office chair and get the show going. But for some reason he couldn’t quite put his finger on, right then and with that man, the idea of assuming the initiative was ludicrous.

Glued to the spot where he’d been ordered to stand, Devon cleared his throat. “So...um...”

The man held up a hand.

Devon watched it for a little while, to see if it was going to do anything interesting, but it just stayed there, indicating he should remain silent.

The big grandfather clock in the hallway outside the office began to chime.

As it slowly tolled the noon hour, Devon studied the older man across the desk. He’d searched the corners of his mind over and over again during the last few days, but all he really remembered was a lot of vodka slammers and, somewhere between late on Saturday night and the early hours of Sunday morning, someone pushing a piece of paper into his hand.

There’d been no name, no number, just a time and an address. This time. This address.

Devon waited out the clock, since it seemed important to the other guy. While it chimed, he happily took the opportunity to study the other man in a way he’d been too drunk to do before.

He was obviously far older than Devon. His hair was dark, but it was already gaining just a touch of grey around his temples. Still, even while he was sitting behind the desk, it was clear that the other man was also much taller and broader across the shoulders than he was.

Devon wasn’t going to complain about that. Stern lips, brooding brown eyes, square jaw...Devon quietly nodded to himself. The guy was definitely worth putting up with a bit of leather for.

As the last note from the clock’s chimes faded from the air, he opened his mouth to ask exactly what the other guy was into.

The older man cut him off before he could utter a single syllable.

Devon forced out a slightly nervous laugh. “You don’t waste any time once you get going, do you?”

The guy didn’t so much as crack a smile.

“Don’t I even get some music to strip to?” Devon joked, but even he couldn’t manage to chuckle this time. Suddenly uncertain for no logical reason, he pushed his hands deeper into his pockets.

“Don’t dance,” the man told him. “Don’t perform. If I want you to put on a show, I’ll tell you. Just take your clothes off.” His voice matched everything else about him perfectly, deep and rich and apparently created especially for giving orders.

Share what you thought about Perfect Timing Vol 3 PRINT and earn reward points.