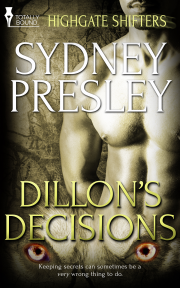 Book 3 in the Highgate Shifters series

Keeping secrets can sometimes be a very wrong thing to do.

When a stranger steps onto Highgate land in the middle of the night, Dillon has to decide whether to chase him off or let him into their pack house. Sergeant, Dillon’s partner and pack alpha, takes the decision out of Dillon’s hands. The stranger looks like a wolf they know from Crossways. He’s disoriented and doesn’t seem to know his own name. Something’s very wrong, and Dillon intends to find out what’s going on.

The stranger turns out to be just that—a stranger and no one they know at all. When the horrifying fact comes out that the stranger has had his face surgically removed then replaced with another, Dillon’s terrible past comes back to haunt him. The government agency he used to work for think he’s disappeared for good—or do they? Have they found out where he lives now? Do they want him back on their books as a spy?

Dillon can’t go back—no way, no how. In order to remain free and at Highgate, he has to work out a plan that will keep every single pack member safe. But most of all he must protect Sergeant, the love of his life and the one man who knows all his secrets.

Or most of them, anyway…

Reader Advisory: This book is best read in sequence as part of a series. It is not a standalone title.

Dillon stared at the security monitor in his office. The camera was trained on the treeline at the end of Highgate Compound’s lawn. A moon hung as though from a wisp of thread created by clouds, giving enough light that he could see individual trunks—gnarled stripes standing guard in the night. Even if the moon hadn’t been showing off its belly, he would have spotted movement down there anyway. His sight was exceptional—one of the reasons he’d been a spy in his life prior to coming to Highgate.

He squinted, leaning forward to make sure he’d seen what he thought he had.

Yes, someone was in the woods, but that didn’t mean anything. During the night, some shifters went for a run, preferring alone time where they were least likely to be disturbed. Vann and Kip especially enjoyed shifting in the darkness after working at the local club. He understood their need. There was a freedom to running alone, different to the norm, although he had to admit running with Sergeant was just as freeing.

Movement in the trees again.

He tapped out a command on his keyboard and the camera zoomed in, close enough that he could see it was maybe a shifter in human form, judging by the loose-limbed way they walked. Now, if it were one of the fulls, he’d have to go out there, get them off the land and explain it was private property. That was a job he didn’t enjoy. Fulls from the closest town of Morgan Creek rarely came here—or fulls from anywhere—and if they did, it was usually to poach. Deer and other wildlife were abundant at Highgate, and sometimes the lure of fresh meat proved too much for fulls to resist, despite the risk of being caught by shifters. A free month or two of meat helped eke out the money, but Dillon had to protect the pack’s rations, not allow them to be given away to humans.

Whoever was in the woods moved closer, toward the lawn—clothed.

Dillon clamped his lips together. There were two choices. Go out there as a wolf then shift and stand naked in front of someone who would possibly be freaked out at the sight of a huge black man in the buff. Or approach as a human and, if the intruder turned nasty and Dillon’s gun wasn’t deterrent enough, Dillon would have to hope he could strip fast and shift. He could defend himself better as a wolf.

He enlarged what was on the screen. The image of the person was grainy, much to his chagrin, and he couldn’t make out any individual features. But the face, although a gauzy blur, was male, no doubt about it. And the hair was a light shade, but other than that, he couldn’t distinguish much. The person was behind a tree now, poking his head out—so he knew he shouldn’t be at Highgate or he wasn’t from around here.

Sighing, Dillon left his office. He quietly padded across the foyer then on to the rear of the pack house, thanking his lucky stars he hadn’t been able to sleep. Normally, someone else would be manning the monitors, but he’d sent them to bed, saying he’d call them when he got tired. With adrenaline pumping through him, any fatigue was well and truly banished.

Outside on the porch, he lifted the binoculars hanging around his neck. He stared through them, annoyed that he couldn’t see the person now. Just that short trip through the house, taking his attention off the screen, and he’d lost his target.

Stop thinking of him like that—a target. You’re not a spy anymore.

There. A quick dart of movement from behind one tree to another. The behavior was furtive, certainly something to bring up a red flag. He was up to no good. He had to be. What law-abiding person would lurk about on private property like that if they didn’t have bad intentions?

He patted his side, confirming his gun was hidden beneath his T-shirt. He didn’t want to have to use it but—

The person staggered out onto the grass in full view and by the position of him, he was looking right at Dillon. The man’s hands were by his sides—no weapon visible—and Dillon relaxed a tiny bit. He waited to see what Highgate’s latest guest was going to do next. Dillon reckoned he’d either bolt now he’d been seen or be brazen and come closer.

Closer it was. Dillon waited until the man had walked across half the lawn before lifting his binoculars again. His blood chilled at the sight of who approached. Not at who it was but the state of him. The last time Dillon had seen him was at Crossways. He’d been a broken man then, but a few months had passed and he should have put on a bit of weight, should have had the glow of a well man about him—should have had the aura of a leader.

Ms. Presley wrote of intrigue and clandestineness as she further developed the worlds of Highgate and Crossways. I adore...

From the very start of this book I was riveted, its very action packed, lots of strange things going on, starting with a stranger, who looks like a wolf from another compound. Nothing is as it seems...

Share what you thought about Dillon's Decisions and earn reward points.

Writing, for me, frees the mind. It takes me somewhere else entirely, and I really enjoy being lifted from this world into one of my choosing. I wish everyone had this escape. It’s like life can throw you lemons, but so long as you have a work in progress to run to, it’s not so bad. However, what happens when writer’s block hits? Luckily, this doesn’t happen to me often, but when it does, it hits so hard I have no chance of forcing the words out.