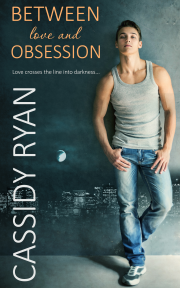 Between Love and Obsession

When love crosses the line into darkness…

Ben can’t walk away from Aiden, even though Aiden seems to have no problem walking away from him, time and time again. In spite of his friend’s warnings, Ben refuses to believe that Aiden is just using him, until a devastating secret is revealed. However, Aiden isn’t the only one with something to hide.

Someone else is keeping a secret that threatens not only Ben and Aiden’s relationship, but Ben’s very life. Will they be able to keep Ben alive?

A sleepy murmur of discontent escaped Ben Osborne as a draft of cool air touched his skin, and he curled his body tighter under the thick comforter. Feeling the mattress dip beside him, Ben sighed.

“, if you drool on my pillow again, I will kick your furry ass, you hear?”

When his dog didn’t so much as whine a protest, Ben chose to take that as a binding agreement and snuggled down farther into the warm bed.

The fog of sleep was starting to pull him back under when the bed moved again and another wisp of chill early morning air slipped under the comforter.

“, quit fidgeting or you can go back to your own be— Ah!” Ben’s eyes popped open when a hand that absolutely did not belong to , or any other dog, slid along his bare thigh and cupped his cock through the thin cotton of his boxers.

“What the fuck?” Ben whipped aside the comforter with one hand, while he scrabbled blindly with the other hand for the lamp switch by the bed. When the light clicked on, he blinked rapidly, head swimming in that way it did when he jumped out of bed too quickly. But he was still in bed and he wasn’t alone.

Between Love and Obsession follows the relationship between Ben and Aiden. Aiden's job pulls him away a lot, so the time that Ben and Aiden spend together is precious. They make the best out of their...

This story was constructed to draw you in quickly and left you gasping at every turn. I found myself hating Aidan only to turn the next page and feel for the man and turning the page again and hopin...

Share what you thought about Between Love and Obsession and earn reward points.