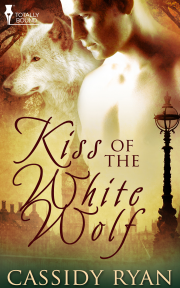 Kiss of the White Wolf

Hal went looking for a wild weekend, and found more wild than he could ever have hoped for.

Hal's world has been in a tailspin since he wrote a book exposing police corruption. Seeking respite and distraction, he heads off for a wild weekend in Brighton, hoping for hot guys, loud music and lots of booze. What he gets instead is a near-naked man mountain, bruised, bleeding and suffering from temporary memory loss.

Hal isn't ready for the news that Luke is a werewolf, and even less prepared for Luke's declaration that Hal is his life mate. But he can't seem to walk away when Luke is obviously in trouble, and there is no denying the searing heat that is between them.

The more time they spend together the deeper their connection becomes, until Hal starts to wonder about the whole 'mate' thing.

However, there is a cloud of danger hanging over Luke's head that could destroy everything they have the potential to become…the men who abducted and tortured Luke still have him in their sights.

And the truth shall set you free.

How many times in my thirty one years had I heard that phrase, or variations of it? When I was a young boy I told my baby cousin Amy that dog biscuits were people food too. Confessing to my mum meant no pudding after dinner and an early bed time, rather than the week without television that would have been the consequence of any attempt at deception.

As an adult, truth was the tenet upon which I built my journalism career. It was the right of the people, the foundation of democracy.

I had no idea that it would also be the catalyst for events that would turn my life upside down and inside out, bringing about some of my worst and best days.

It started simply enough. I was working for a top national newspaper when I got an anonymous tip that a Metropolitan police officer was taking money to influence the outcome of investigations—The Farmer, they called him, because of his ability to plant evidence. It had been a slow news week, so I decided to do a bit of poking around.

Within weeks I’d discovered that The Farmer was just the tip of the iceberg. Informants were crawling out of the woodwork with their tales of corruption, intimidation—convictions and acquittals bought and paid for. Unfortunately, none of these informants were willing to go on the record, and my editor was starting to get agitated at my failure to produce.

I couldn’t let it go, though. In my gut I knew I was onto something. There was a cartel of officers in the Metropolitan Police Force selling their services to the highest bidder. Robbed a bank, but don’t feel like going to prison? No problem, bung us a few grand and we’ll bring you a patsy to hang the blame on. Men had gone to prison for crimes they hadn’t committed while the real offenders, often violent, dangerous individuals, went about their crooked business with impunity. I just couldn’t fucking prove it.

After two months, my editor finally lost patience and issued his ultimatum—bring the story home or clear my desk. I still didn’t have cast iron proof, and if we were going to avoid a potentially crippling law suit, I would need nothing less. But I’d already invested so much time and energy, and I was loathe to see it all wasted.

In the spirit of truth and honesty, I have to admit there was an element of stubbornness verging on obsession in my decision to resign and go it alone. I won’t deny that I felt a little trepidation at working for the first time without the safety net provided by being an employee of a media giant. But there was also a kind of exhilaration to be found in the uncertainty of the path I’d chosen to walk.

For many more months I continued to dig, surviving on my rapidly dwindling savings as I visited prisons around the country, interviewed countless inmates, their friends, families and even their criminal connections, for few of these men were entirely innocent. Most of them were ‘known to police’, some particularly distasteful, and probably deserved to be in prison at one time or another. But the fact remained that, this time, they’d been incarcerated for something they hadn’t done because of a small group of police officers who, for the sake of some nicer suits and faster cars, had chosen to betray the people’s trust and pervert the laws they had once pledged to defend.

The breakthrough I so desperately needed came in the form of Charlie Speight, a career villain from London’s east end. When he contacted me, Charlie was in his sixties, suffering from end stage lung cancer and eager to leave his mark before he died.

Charlie was an old-time safe cracker who had managed to always stay two steps ahead of the law. The light of Charlie’s life had been his son, Steven, a university graduate on his way to a doctorate in, of all things, criminology. Charlie had determinedly kept Steven distanced from his own life, wanting something more for his son. Unfortunately, Charlie’s ability to avoid arrest had made something of a fool of the police, and over the years the resultant resentment had festered in one officer in particular—Detective Chief Inspector John Stoke.

While looking for someone to take the fall for an armed diamond robbery, Stoke had seized his chance to settle the score with Charlie, fitting Steven up so neatly that it had taken the jury less than an hour to find him guilty. Steven’s life sentence had infuriated his father. The young man’s suicide just months later took the heart and soul out of Charlie.

For the next four years, Charlie devoted his life to putting together a dossier of the misconduct of Stoke and his cohorts—comprehensive details of banks accounts and property held under fake identities, photos and recordings, both audio and video, of meetings with criminal clients to arrange plans and payoffs. He’d intended to turn over his findings to the press, but when he’d heard, through the underground grapevine, about my own investigation, he’d called and asked me to meet him at a café in Lambeth. Over bacon sandwiches and strong, black tea he’d told me his story, then had handed over the thick file wrapped in brown paper and string.

It was a journalist’s wet dream. And a publisher’s too, apparently, judging by the bidding war my agent gleefully presided over.

From beginning to end, this story swept me along on a pleasant buzz of adrenaline and anticipation...Once the case was cracked, it revealed an interesting twist that connected Hal and Luke in an unexpected...

Share what you thought about Kiss of the White Wolf and earn reward points.