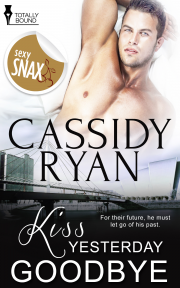 For their future, he must let go of his past.

Aidan has a huge crush on Jon, but not only is Jon his boss, albeit temporarily, he is also recovering from a bad break-up. On his final day at Jon’s publishing company, Aidan finds the courage to make his move. It results in what should be a solitary evening of mind-blowing sex before they go back to their own lives. But when a confrontation with his landlord leaves Aidan bruised, bleeding and homeless, Jon and his friends come to his aid.

Jon is smitten by Aidan, and utterly terrified. His last relationship has left him with some pretty deep emotional scars and he has no wish to get back in the game. But the more time he spends with Aidan, the less time he wants to give to the past.

However, Aidan has something in common with Jon’s ex that could spoil any chance they have of making a life together.

The sound of laughter drifted to Jonathan Ballard through the closed door of his office. Heat unfurled low in his stomach. He would recognise that laughter anywhere—throaty, rich and just a little dirty.

Before he even thought about it, he was getting out of his chair and walking to the door as if pulled by the irresistible call of a siren.

In the outer office, domain of the junior editorial and support staff, there seemed to be some kind of party going on. Instead of the usual charge for the exit, on that Friday afternoon everyone was gathered at the front of the spacious room, and bottles of beer were being passed around.

Confused, Jon headed for the office next to his own and found Dan Brodie—the other half of Ballard & Brodie Publishing—relaxing back in his chair, feet up on the rosewood desk, sipping whisky from a crystal glass.

“What’s going on?” Jon asked, shaking his head when Dan tilted his glass in a silent invitation to join him.

“Leaving party,” Dan explained, leaning his head back against the chair, blond hair and black leather a stark contrast.

“Someone’s leaving?” Why was he always the last to know these things? He was only the senior partner in the friggin’ company.

Jon felt his spine stiffen slightly. “You mean…the temp? He’s been here, what, a month?” he asked, as if he wasn’t achingly aware of who his friend was talking about, of the very second the guy had first walked into the building.

“People like him,” Dan said. He shrugged and took another sip from his glass. “He’s easy to like, and he’s been a good assistant. I’ll miss him.”

Like? Jon had no idea. He’d been studiously avoiding any kind of contact with Aidan since he’d laid eyes on him and felt something flicker inside that he’d believed thoroughly extinguished. To Jon, Aidan Shaw, with his messy black hair, his sunny smile and his sharp cheekbones, represented only one thing—danger.

Jon only had to think about getting involved again and his stomach churned with the burn of the humiliation he’d suffered at the hands of that beautiful bastard Iain. No way was he ready to get on the relationship bus again.

Tempted, now that was another thing. He’d seen the looks Aidan threw his way, the little smiles, the blush that stained his cheeks when their eyes met. He was… Okay, he was fucking adorable, no two ways about it. Jon had seen the interest in Aidan’s eyes, and had spent weeks fighting the desire to reach out and take what he was sure was on offer. He wasn’t made of stone. But just thinking about taking that step, opening himself up again… It was like poking at a healing bruise.

Jon winced at the concern in his friend’s voice. Almost as bad as getting his heart stomped on was watching his friends worry about him.

He smiled, and it didn’t feel too forced. “Of course. I’m going to head home though.” He still had a pile of work on his desk, but he could take it with him and do it at home. It wasn’t like he had anything better to do with his weekend.

This is not a story filled with tremendous angst and plot twists, but it is simply an enjoyable and sexy romance. Jon has had his heart broken, and he’s afraid of another relationship. Aiden is sw...

This was a fun fast paced little read. I liked both Aiden and Jon. Aiden is adorable and brings fun and laughter into Jon’s life again. I liked the two of them together. They were cute together with...

Share what you thought about Kiss Yesterday Goodbye and earn reward points.

I’ve been writing professionally for several years now, have three novels, a few novellas and a couple of dozen short stories under my belt. But it is only with my latest novella, Kiss Yesterday Goodbye, that I’ve had the confidence to set the story in my native Glasgow.