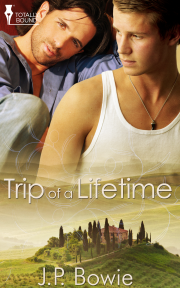 Trip of a Lifetime

Alex Brady was looking for some excitement in his life, but nothing could have prepared him for what a trip to Tuscany would bring him—excitement, yes, but with an undercurrent of danger that could possibly end up costing him far more than the price of the vacation.

When Alex tells his best friend Russ of his proposed trip to Tuscany, Russ tries to dissuade him, especially when Alex explains he'll be renting a car and making his own way around a foreign country. Russ is sure Alex will get lost or mugged.

On his first night in Florence, Alex meets Gavin Andrews, a handsome Scotsman, and looks forward to a more than pleasant start to his ‘trip of a lifetime'.

But Gavin disappears without a word, and though disappointed by the Scot's apparent lack of interest Alex continues with his tour of Tuscany in his rented car, staying overnight at the Villa Lorenzo, a converted farmhouse run by two gay men, John and Alfredo.

Alex is shown a portrait of Lorenzo, the original owner, and that night Alex has a strangely sensual dream, that comes to an abrupt halt when Lorenzo warns him that Gavin is in danger.

What follows is far more excitement than Alex ever bargained for — a kidnapping, a murder, and ultimately an offer of marriage!

Truly, for Alex this is the trip of a lifetime.

What the hell is wrong with me? he pondered as he threw the magazine back on the table in front of him with an involuntary snort of disgust. He looked around him with a guilty start, aware that he’d caused a few patients beside him in the waiting room to raise eyebrows and lower magazines, probably wary of the young man with the scowling expression, hoping he wasn’t about to go ape-shit right in front of them.

He smiled an apology at the elderly woman opposite him and slunk a little lower in his chair. After a brief disapproving appraisal of Alex, the dowager resumed reading her out-of-date copy of Time. Alex sighed again, this time more quietly, then jumped to his feet as the dentist’s assistant called his name.

“Just fine,” he mumbled, knowing the other patients were glad to see him go. “How are you?”

“Just lie down, and Dr. Henderson will be with you in a minute or two.”

Alex stretched out on the dentist’s chair and stared up at the TV monitor over his head. He smiled as he recognised the episode of Mr Bean at the dentist he’d seen the last time he’d had his teeth cleaned.

They must have it on a revolving loop, he thought, chuckling as the actor playing the dentist accidentally stabbed himself in the leg with the novocaine-loaded syringe.

“Like this one?” Dr. Henderson’s deep voice from behind him had Alex craning his neck.

“Every time I come here.”

Dr. Barry Henderson was hot. One of the reasons Alex looked forward to having his teeth cleaned more regularly than he used to, even though the young dentist was a bit on the suck-up-the-pain side.

Henderson gave him a lopsided smile, a lock of his dark brown hair falling over his forehead as he leaned over Alex.

Alex resisted the temptation to push the lock of hair gently back, and instead opened his mouth to the dentist’s questing gaze.

Henderson probed Alex’s mouth with his forefinger. “So, how’ve you been?”

“Good. Had a vacation yet?”

“The wife and I just got back from Italy.”

“Yes, it was. Hmm...” Henderson peered closer at the back of Alex’s mouth, then grabbed a metal tool and started scraping. “We went to Florence, Venice, Rome. Breathtaking really. Milan...the opera house there, La Scala...magnificent.”

“It was. I really recommend it if you haven’t ever been.”

“Haven’t—Ow!” Alex winced as the tool’s sharp point dug a little too deep into his gum.

“Sorry ‘bout that. Anyway, as I was saying, if you haven’t had a vacation this year, maybe you should consider Italy.”

Henderson beamed at him and shook his hand in a crushing grip.

“Don’t forget to talk to your travel guy, and check out Italy.”

I really love the characterization...Thank you to J.P. Bowie

Share what you thought about Trip of a Lifetime and earn reward points.