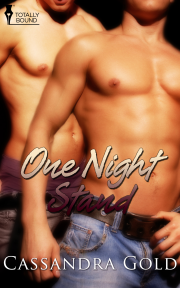 Can a one-night stand lead to lasting love?

Photographer Tom Garner is finally ready to date again after the death of his partner.

On his first night out, he meets sexy Ian. Unfortunately for Tom, Ian isn't

looking for a relationship.

Ian Abernathy has been burned by love one too many times. His new rule, one-night stands only, seems to be working well—until he meets Tom.

Can a one-night stand lead Tom and Ian to something real?

“There. You look wonderful.”

When Lorenzo stepped back, Thomas Garner peered at his reflection in the mirror. The new striped button-up shirt and khaki slacks he wore looked okay, but he still had his same old boring brown hair and hazel eyes. He also hadn’t lost any weight or gained any new muscles in the past few minutes. ‘Wonderful’ was probably an overstatement.

“Are you sure you’re not saying that because you’re my friend?”

Lorenzo laughed. Denny, Lorenzo’s partner, came up behind them and whistled. “Nice, Tommy.”

Tom grinned to hide his nerves. “Thanks. Now let’s go, before I chicken out.”

A few minutes later, Denny pulled into a parking spot across the street from their destination. Tom got out of the car, taking deep breaths. God, he was nervous. He hadn’t been to a place like this in years, since the early days of his relationship with Michael. He’d never really liked the bar and club scene anyway. The only reason he stood here tonight, about to go into a gay bar, was because Lorenzo had insisted it was past time he started getting out again.

And he was right. Michael had been gone two years now. Tom still loved Michael, probably always would, but he was ready to date again. Who knew, maybe he would meet someone interesting tonight. Even if he didn’t, braving the bar scene would be good experience. He hoped.

“Sorry.” He trailed behind his two friends, not quite able to match their enthusiasm.

The air inside the bar was blessedly warm after the frigid temperature outside. Tom stood in the doorway for a moment, glancing around. The night was young, so the place wasn’t too crowded yet. Quite a few men stood at the bar, drinking and talking. Others sat in booths along the periphery of the small dance floor. He spotted a wide range of ages, from early twenties to a few men in their forties or fifties. The clothing styles varied wildly as well. Some men wore leather, others wore bright colours and skimpy clothing, and some, like him, were dressed in ordinary dressy-casual wear. He heaved a sigh of relief. At least he’d blend in.

“Let’s get a drink.” Lorenzo grabbed his arm and dragged him to the bar.

He ordered rum and Coke. Lorenzo’s drink choice, a bright pink cosmopolitan, made him smile. Once Denny had ordered a soda, they all turned to watch the people.

Lorenzo gave him a wicked grin over the rim of his martini glass. “See anyone you like?”

Denny shrugged. “Give it time.”

They stood at the bar for an hour, watching people and making small talk. After a while, Tom couldn’t help but notice the way Lorenzo eyed the dance floor. His friend loved to dance.

Not wanting them to feel they had to babysit him all night, Tom nudged Lorenzo. “Why don’t you two hit the dance floor? I’ll be fine right here.”

Share what you thought about One Night Stand and earn reward points.