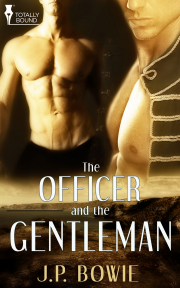 The Officer and the Gentleman

A young Scotsman and a Cavalry Officer embark on a forbidden love affair as the winds of war threaten to tear them apart.

When Robert Alexander Macdonald locks eyes with Captain Charles Wentworth at a social gathering in London, it's not long before they are also locking lips and engaging in a covert love affair. After an idyllic time spent together in a cottage on the windswept cliffs of Cornwall Charles receives orders to report for combat duty.

Britain and France are at war with Russia, and Charles, an Officer with the 11th Hussars finds himself part of the ill-fated Charge of the Light Brigade, a military disaster that outraged the British population.

Robert, on hearing that Charles is missing, goes in search of him, but finds only the shell of the man he loves, a man damaged in body and mind, with no memory of his family or loved ones. Faced with the possibility of Charles never again knowing what he and Robert meant to one another, Robert decides to dedicate himself to Charles' full recovery.

Going against all medical advice, Robert removes Charles from the hospital and takes him back to Cornwall in the hope that the familiar surroundings of his old home will bring back some latent memory to his lover's mind. A hope, that as time goes by, becomes less and less of a possibility.

Robert Alexander MacDonald peered through the window of his hansom cab at the dreary drizzle that had enveloped the city for the past hour or so. The occasional wispy cloud of mist hovered over the street lamps, adding to the overall picture of gloom. Robert sincerely hoped that his destination, Lady Haddon’s townhouse, would present a more pleasant atmosphere than that which surrounded him at the moment. It seemed to him that summertime in London was not much better than in Scotland.

Robert had recently come down from the North, and although he had been welcomed by Lady Haddon and her niece Emily Wentworth, he still felt the lack of familiar surroundings afforded him at home. Still, he had always wanted to see London, the seething metropolis he’d heard so much about, and following his grandfather’s demise, it had seemed as good a time as any to spend some time away from the estate he had inherited in Elgin. He had secured himself some comfortable rooms in Mayfair and had presented his letter of introduction to Lady Haddon, who had immediately invited him down to her country estate in Sussex. Robert had spent several pleasurable days there, enjoying the company of Emily and her companions. He and Emily had become fast friends, going for long walks down country lanes, riding their horses across the moors and picnicking on the cliffs overlooking the ocean.

There was just that one important ingredient missing.

His reverie was interrupted as he felt the hansom come to an abrupt halt with a clattering of the horse’s hooves on the cobbled street. Climbing out of the carriage, he gazed up at the brightly lit windows of the townhouse where the party was being held. Lady Haddon had rather proudly informed Robert that her family had been the first of their acquaintances to have new gas chandeliers installed throughout the house. Lady Haddon had been quite insistent he should attend her first soiree of the season, and Robert had been only too happy to accept her invitation.

His heart quickened with anticipation of the evening ahead.

The townhouse door swung open, and a liveried servant descended the steps carrying an umbrella with which he sheltered Robert until they reached the door. He then smiled politely as he accepted Robert’s hat and gloves. Lady Haddon, who happened to be standing in the hall chatting with some guests, noticed his arrival and swept forward in a rustle of expensive, pale blue silk to greet him.

“Robert, how marvellous that you could come,” she gushed. “Emily will be delighted, as of course, I am. So good of you to brave this disagreeable weather.”

Robert bowed over the hand Lady Haddon extended to him, brushing the lavender-scented skin with his lips. “I wouldn’t have missed seeing you and Emily for the world, Lady Haddon,” he murmured, smiling at the older woman.

“How handsome you look, Robert,” she whispered. “The cut of that fine coat suits you immensely.”

“Thank you. And may I say, Lady Haddon, I have never seen you look lovelier.”

She laughed gaily. “Oh, dear boy, save your flattery for the young ladies who deserve it. And,” she leaned in with a conspiratorial aside, “there certainly are some lovelies here tonight.”

Robert heaved a mental sigh. Of course, there would be—all lined up to meet the newly wealthy young Scotsman, all with an eye to snaring him and helping spend the immense fortune left to him by his grandfather—no matter that the money had been amassed by less than pristine means. It was the amount that mattered. As Lady Haddon placed a hand on his arm to guide him into the living room where the guests were assembled, he took a quick glance in the hall mirror. He passed his hand over his red-gold, curly hair then ran a finger inside his too-tight collar.

“Please be at ease, Robert.” His hostess patted his forearm gently. “I will make only the proper introductions for you.”

Proper introductions. By that, of course, she meant only eligible ladies, regardless of looks or age. But how could he possibly inform the lady at his side that, if she introduced him to the Queen of Sheba herself, it would hardly raise a flicker of interest within him?

He smiled as Emily, Lady Haddon’s niece ran to meet him. He was pleased to see Emily. She was not beautiful in the classical sense but pretty, and she possessed a sparkling smile and a lively sense of humour. Robert had spent several very enjoyable afternoons in her company. Unlike some of the other young ladies he had passed the time of day with since coming to England, Emily never made him feel as though she were regarding him as a potential suitor or husband.

J.P. Bowie's story takes place in England in the mid-1850's, a time when liasons between two gay men were to be confined behind closed doors and kept under wraps. Such is the case when the young, wealthy...

The Officer and the Gentleman absolutely blew me away. Mr. Bowie has created a beautiful set of characters in this story. The tenderness that Robert shows literally brought me to tears. Romantic...

Share what you thought about The Officer and the Gentleman and earn reward points.

Buy Now: £3.99
From Upstairs to Downstairs