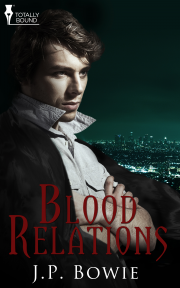 In a time when vampires have gained civil rights and walk freely among humans, they must still overcome the factions who seek to take away those rights and return them to the role of the hated, and hunted.

Rob Lydell employed by 'Blood Relations', a philanthropic group of wealthy businessmen, is asked to negotiate a meeting with Gabriel Torrance, a powerful vampire. The object of the meeting is to improve relationships between humans and vampires, who have recently gained civil liberties.

Rob and Gabriel form a close relationship of their own, but not everyone is happy about vampire civil rights and Rob soon finds himself the target of attacks and threats, while the violence against vampires by members of so-called 'staker gangs' increases.

As Rob and Gabriel's blood bond grows, they are startled to discover that the biggest danger they have to face may come from a power play within Blood Relations itself - not to mention some members of the Vampire Council who still regard humans as prey, rather than equals.

Sometime in the Future

Rob Lydell pushed open the door of the crowded downtown Los Angeles club and made his way through the press of bodies towards the bar. He knew he wasn't the only human in the bar, and it wasn't the first time he'd been in vampire company, yet he couldn't quite rid himself of the nervous prickle running down his spine. Trying to avoid the curious and lascivious stares thrown his way, he kept his eyes on the mirrored shelves behind the bar crammed with bottles of liquor.

The bartender, a tall, darkly handsome vampire, gave him a cursory nod and a, "What'll it be?"

The vampire's eyes flitted over Rob, taking in his blond, blue-eyed, wholesome good looks. "Haven't seen you in here before."

"I'm looking for someone," Rob said, his tongue passing over his lips as he watched the ice-cold beer being poured into a frosted glass.

"Gabriel Torrance. You know him?"

The bartender nodded as he handed Rob his beer. "Not well, but he comes in here most nights. We've talked." The tips of the vampire's fangs showed as his lips curled back in a smile. "He likes to talk." He eyed Rob with just a hint of suspicion. "You a friend of his?"

"Didn't think so. Torrance doesn't care much for mortals."

"Can't trust them, he says. Nothing personal, but he's not exactly wrong about that. Every day, there's another restriction placed on us. I thought when they made us legal mortals would leave us alone—but it seems the ones who run this city are determined to undermine what the federal government put in place five years ago."

"That's what I want to see him about…"

"Well, here's your chance." The vampire bartender looked over Rob's shoulder. "He just walked in."

Rob turned, his eyes searching the crowd, his breath catching in his chest at his first sight of Gabriel Torrance. He was just as he'd been described to Rob. Average height, just an inch or so under six feet, wide shoulders, a shock of thick auburn hair combed back from a face that was arresting in its aquiline beauty—but it was his eyes that took the total focus of Rob's attention. Mesmerising was the only way to describe the vividly green orbs that locked for a moment or two on his own dark blue eyes before sliding away to survey the other patrons standing at or near the bar.

Torrance was simply but stylishly dressed in a dark green linen shirt that perfectly accentuated the green of his eyes and black jeans outlining his muscular thighs. A hint of a smile touched his lips as he ordered a glass of zinfandel from the bartender.

"And how are you tonight, William?" he asked cordially.

"Very well, Mr Torrance." The bartender jerked his head at Rob. "This gentleman was asking about you earlier."

Torrance turned and locked eyes with Rob again then he took a long, slow sip of his wine, never dropping his hypnotic gaze from Rob's.

"Uh, hi… I'm Rob Lydell." Rob wasn't sure whether he should offer his hand or not.

Torrance solved the problem by putting his wine glass down on the bar and holding out his hand. "Gabriel Torrance."

The hand Rob took in his was cool and dry, and he shivered. Not from the coolness—he knew all vampires had skin that was less than warm to the touch. He had shaken hands with a vampire before, but the contact he'd made with this man was different—cool, yes—but he couldn't ignore the tingle that pulsed through his fingers and up his arm.

"You wanted to speak to me?"

"Uh, yes." Rob's gaze slid away from Torrance's to a far corner of the bar. "Could we, uh, perhaps sit over there?" He indicated a corner table.

"Certainly." Torrance smiled. "Lead the way," he said, picking up his wineglass. He put a hand on Rob's shoulder as they passed through the crowded bar. "Just so I don't lose you in the throng," he said, his voice low and close to Rob's ear.

I love the way that J.P. Bowie wove current politics and thinking into a scenario that shows the not too distant future...With great characters, a devious plot born of an evil mind, lots of action,...

I enjoyed how some of the characters from the My Vampire and I series were incorporated in this story adding depth to the plot. The surprise twist was one that I never expected and I won't give it away,...

Share what you thought about Blood Relations and earn reward points.