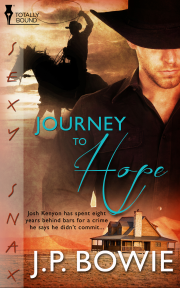 An ex-con finds a new life and love in a place called Hope.

The boys from Ride 'em Cowboy are back! This time Royce and Parker are worried that their friend Brett Taylor has made a big, big mistake in hiring a new man to help run Hope Ranch. Joel Harper, the local sheriff, is especially concerned as he's been notified by the authorities that the man has only recently been released from Wyoming State Penitentiary.

Josh Kenyon has spent eight years behind bars for a crime he says he didn't commit, and that he was framed for. Brett believes him, and when the feelings they have for one another become much more than mere attraction, he is determined to find someone who can prove Josh's innocence.

But his good intentions cause unforeseen chaos when a man from Josh's past arrives with only one thing in mind—silencing Josh forever.

Reader Advisory: This story contains some of the characters from the Ride ‘em Cowboy books, however it stands alone.

Josh Kenyon pulled his truck off the road and stepped out of the cab to look at the small spread in the valley below him. He hoped to find some kind of job there. It had been a long haul from Cheyenne, Wyoming to Sacramento, California. He was tired, a mite cranky and his neck was stiff from sleeping in his truck for three nights.

He’d stopped in the small town of Denton, outside Sacramento. In the general store there he’d got himself a soda and a burger, and just by chance had noticed the small postcard pinned to a bulletin board.

He’d written down the number and called as soon as he’d finished scarfing down his burger. The guy, Brett, had answered, sounding friendly and, if Josh wasn’t mistaken, kind of anxious to find some help fast. After getting directions to the ranch from Denton, Josh had told the rancher he could be there in about twenty minutes.

He wondered if the friendliness in Brett’s voice would fade when Josh informed him of his past. He’d come this far in the hope of escaping his tainted reputation that had branded him as undesirable—and unhireable. Well, this would be the first test of whether he’d made the right decision to come all the way to California.

Looking down on the ranch, Josh could see one man, followed by a tail-wagging dog, walking towards a large outbuilding. Looks so peaceful, Josh thought, scanning the perimeter to see where the other men were working. Surely he can’t be alone down there? Josh didn’t know a whole lot about ranching, but he was willing to learn. He could ride a horse, back in the day, and the ad had said ‘will train if necessary’.

"So, let’s go," he said aloud, climbing back into his truck. "Let’s see if Josh Kenyon’s luck can ever change for the better." With a determined set to his jaw, he started the engine and pulled back onto the narrow road that led to the ranch gates—and maybe, just maybe, if he could fit in here, something to live for.

His heart lifted as he read the name inscribed over the arch he passed under—Hope Ranch.

Brett Langley straightened his aching back, wiped the sweat from his forehead, and took a break from mucking out the stables. The horses would be bedded down shortly and they needed fresh straw. He glanced at his watch. That Josh guy had called about ten minutes ago, so if he hadn’t got lost he should be here any time now. He hoped the man was someone who would work out this time.

He had owned Hope Ranch since his dad died a year ago—a year that had seen its heartaches, headaches and was still on the ‘iffy’ side financially. Two of his hands had left him recently. One he’d been glad to see the back of, but the other, Al, he’d had high hopes for as foreman. Al had worked the ranch for two years then left to go to college. Brett couldn’t blame him for that, but suddenly he was without a young and willing worker, saddled instead with a string of guys who just couldn’t hack the long hours and less than competitive pay. Not that he could blame them either, but he really needed someone to help pick up the slack—slack that’s getting bigger and harder to deal with every day.

Chuckling at that last thought, he couldn’t deny he liked big and hard, just not the kind he’d been faced with for months now. He wondered what Josh would be like. Nice voice, kinda deep and mellow. Older maybe? He glanced at his watch again. Better get on with it… He raked the combination of old straw and manure to a pile outside the stables, then began pushing it all towards the compost heap he’d built well away from the house.

"That should do it," he said, turning to look at Jaz, his border collie, as if for approval. Jaz’s tail was working even harder than usual at wagging as the dog stared past Brett at something in the yard behind him.

"Hi, there." The deep voice startled him. He hadn’t heard the guy drive up. "Can I help you with that?"

"Oh, hi…" Brett threw the pitchfork to one side and walked towards the man. "Josh?"

"I’d offer to shake hands," Brett said, "but I’m kinda dirty right now." He grinned at Josh, at the same time taking in his rugged good looks, the broad-shouldered physique and the blue eyes gazing at him steadily from under dark, feathered brows. The voice definitely matched the man. "I just have to lay down the fresh straw and I’ll be right with you."

"Well, like I said…" Josh tipped his hat back, revealing dark curly hair. "Can I help you with that?"

J.P. Bowie delivered sensuality and sexiness in this wonderful cowboy tale. The love scenes were tender with a touch of desperation that warmed the heart. The feelings emanated from the written words...

The connection between both men is explosive and before either man knows they are both head over heals for each other.

It is nice and sexy to read their relationship forming and to see the pr...

Share what you thought about Journey to Hope and earn reward points.