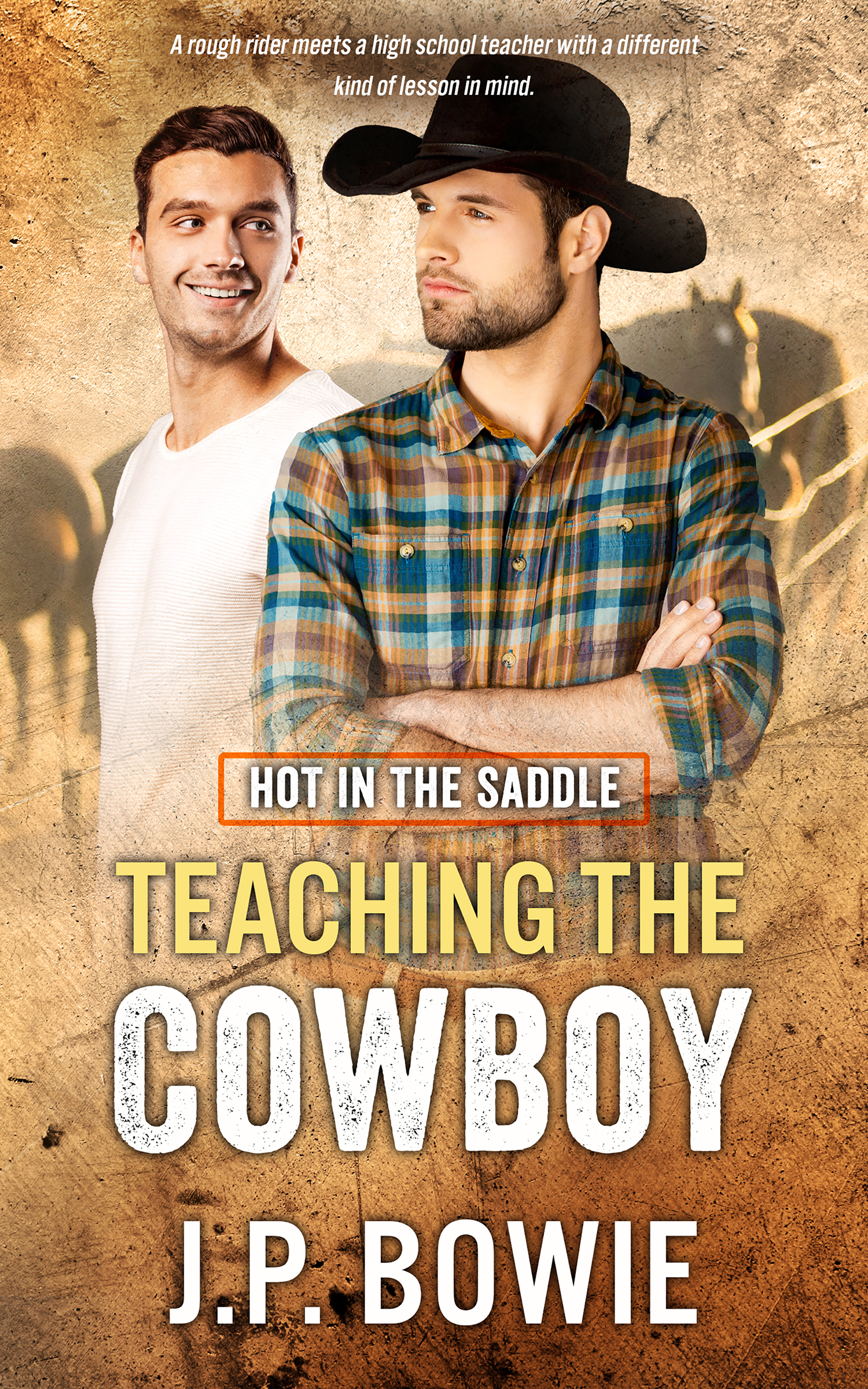 Book 2 in the Hot in the Saddle series

A rough rider with a dark past, looking for a fresh start in life, meets a high school teacher with a different kind of lesson in mind.

Jordan Hendricks, trying to put the past behind him, is hired at the Seven Plus, a dude ranch that caters mainly to gay men and women. On his second day there, Jordan meets Blake Cameron, a high school teacher from San Francisco, and attraction sizzles between them. Unfortunately, Seven Plus rules prohibit sexual fraternization between trainers and guests, a rule that Parker Jones, one of the ranch’s owners, tells Jordan is ‘set in stone’.

Nevertheless, the two men bond, and on Blake’s last night at the ranch, he coaxes Jordan into a goodbye kiss and a promise to meet again outside the ranch where they can explore the possibilities of a relationship.

But Jordan’s past, in the form of Grant Svenson, the man who controlled his life for more than three years and who attacked him in a drunken rage and destroyed Jordan’s rodeo career, comes back to haunt him. Unless Jordan can stop Grant from wreaking havoc a second time, the chance of a future with Blake will never be realized.

Reader advisory: This book mentions an abusive ex and past violence against and drugging of the main character. There is mention of mental illness, suicidal ideation, scenes of stalking and one scene of knife violence.

Parker Jones watched the black Jeep Wrangler drive through the entrance to the Seven Plus Ranch. He was expecting the driver, a guy recommended by Jed Miller, Parker’s friend and foreman over at the neighboring Double R Ranch.

‘You’ll like Jordan,’ his friend had told him once Parker had set up the appointment. ‘He’s younger but he’s a born horseman. Just what you need, right?’

Parker had agreed. He’d been lucky so far with his hires, and he appreciated that the success of his and Royce’s dude ranch was due in part to the affable and attractive bunch of cowboys who added some spice to the riding and roping lessons his customers came from far and near for. And ‘far and near’ wasn’t an exaggeration. Thanks to his husband Royce Chandler’s imaginative advertising, they’d recently had guys showing up from France and the UK, and last week a couple from Iceland.

Parker walked over to the Jeep pulling to a stop in the guest parking lot. “Morning,” he greeted the driver. “Jordan Hendricks?”

“That’s me.” Jordan unfolded his long legs out of the vehicle and extended a hand to Parker. “You must be Parker Jones.”

“Guilty as charged,” Parker said, taking in Jordan’s height and physical attributes. The man was tall and built, with wide shoulders and narrow hips. He had a pleasant face, emphasized by the ready smile he now displayed. His dark blue eyes searched Parker’s for a second or two before he looked around at the ranch’s well-maintained grounds and buildings.

“Nice place,” he murmured almost to himself.

“Come on inside and we can talk some.” Parker touched Jordan’s arm then led him toward the rustic timbered ranch house. “Like some coffee? I just brewed it fresh.”

“Thanks, I’d like a cup.” He followed Parker into the kitchen and took the mug of coffee Parker handed him.

“Anything in it?” Parker asked.

“This is all Royce’s doing. He designed it, helped with the construction and conned friends into helping him with the painting and tiling.” Parker followed Jordan’s gaze as he studied the Western prints on the living room walls.

“He do these too?” Jordan walked over to get a closer look at one depicting a bronco and rider.

“From photographs he took at the rodeo. He had them blown up then they go through some kinda process he knows all about, and you get that vintage look.”

“It is. Three or four years back. Last time he competed.” Parker chuckled. “He said he was getting too old, but Royce says Charles nagged him into retiring from competition. Said he was tired of having to sit with his eyes closed and fingers crossed every time Jed got on a bronco.”

“That I believe.” Jordan grinned. “Charles is a force to be reckoned with, despite the fact he’s got to be half a foot shorter than Jed.” He traced the walls with an interested gaze. “Is there one of you? Reckon there’d have to be.”

“Oh yeah. In the dining room. C’mon, I’ll show you.” There were two prints. One of Parker astride a bucking horse liked he owned it, the second of him being thrown backward off the bronco. “Son of a gun just had to have that one done,” Parker said wryly.

Jordan grinned. “The look on your face is priceless.”

“Yeah, well I don’t have to tell you what it feels like when you know your ass is gonna hit the ground hard.” He joined in Jordan’s deep chuckle. “So, you’ve given up the circuit?”

“Yep. After breaking a leg in two places, thigh and calf. The doctors said I’d have to be real careful in future so I figured I needed to do something else. Can’t afford the hospital bills, for one thing. Jed says you run a good business here and if you’d have me, I’d be happy to work for you.”

Parker nodded, liking Jordan’s straightforward approach. “Let me show you the stables and you can say hello to a couple of the men there. How are you dealing with people? Mostly gay guys, a few women and the occasional straight couple.”

Jordan shrugged. “I haven’t had to deal too much with the public. Some groupies at times, but I don’t encourage it.”

“Well, you’ll get a pretty diverse crowd here. Like I said, most of our guests are gay, some of the hands, too.”

“No problem there. I’m bi. Though, to be honest, I prefer guys, but I don’t fool around where I work, so your boys are safe with me.”

Parker laughed and clapped Jordan on the shoulder. He figured one or two of the ‘boys’ might be disappointed to hear that, but he kept that thought to himself. They walked outside toward the stable. “Jed said you were in Fresno last he heard.”

“Yeah, lived there a few years, but it was time to get out.”

There’s a story there, Parker thought, but it had never been his habit to pry—something Royce had kidded him about over the years. ‘How can we get juicy gossip if you don’t ask the right questions?’ he’d complain. “Corral and pasture are down yonder,” Parker said, pointing. “The riding trails start here in the ranch and wind around through the Double R. Jed and Aaron are okay with it, long’s nobody does anything foolish. Of course, Aaron bein’ Royce’s dad gives us more leeway than most.”

They had reached the stable and Parker introduced Jordan to the two men working in the stalls. “Jordan, this is Bob Jennings, one of our original team, and Gerardo Gonzalez.” Jordan shook hands with the older man and the shy Mexican boy.

“You a new hire?” Bob asked, peering up at Jordan. “We could sure use you right now.”

“Parker. We don’t stand on formality here, Jordan. C’mon, we’ll take a look at the horses in the corral.”

Share what you thought about Teaching the Cowboy and earn reward points.

Other books in the Hot in the Saddle seriesView Series Page