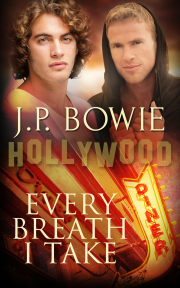 Every Breath I Take

Troy Kendall was a bad boy, an addict with attitude, but, since Detective Mark McLennan entered his life, all he wants to do is help others—even if they really don’t want him to.

Life for a recovering drug addict isn’t easy. Fortunately for Troy Kendall, he has handsome Detective Mark McLennan to lean on for love and support. When Mark asks Troy to move in with him, Troy is over the moon, sure that now his future will be everything he has dreamed of.

Now that he’s able to think about the bigger picture without himself as the main feature, he starts taking an interest in others. Like his ex-roommate Kevin. Troy feels a bit guilty about finding happiness when it’s obvious Kevin is lonely and miserable. Or Teresa, the food server working at the corner diner. Troy is sure she’s a victim of domestic abuse.

Ignoring Mark’s opinion that he’s being annoyingly nosy, Troy goes on a mission to try to help those he feels are lacking in the happiness department. He’s given excuses from Teresa when he asks her how she came by all the cuts and bruises he sees her suffering from on a daily basis. Is it the boyfriend or her domineering father who’s making Teresa’s life a misery?

After a conversation over a drink with Kevin, he’s worried that his ex-roomie is on the verge of signing up for gay conversion therapy. When Kevin goes missing, Troy and Mark along with Kevin’s new roommate, Roger, go on a search that leads them to a basement in the suburbs where a homophobic couple are holding Kevin captive.

Is Troy’s plan to find happiness for others doomed to failure? Or can he and his friends change the course of disaster both Kevin and Teresa are on?

Publisher's Note: This book is best read as a sequal to All I'll Ever Need.

Troy Kendall paced the floor of his apartment’s living room like a nervous cat. He was glad he was on his own. Kevin, his less than sociable roommate, had gone out, and Edward, his now BFF, had moved out to live with his boyfriend, Alex. He was glad, because in about a half hour there would be a knock on the door and the man he’d been dating and having the most incredible sex—ever—with, would be here. From the moment Detective Mark McLennan had planted one very long and hot kiss on his lips, Troy had been totally lost in lust and love.

The first time Troy had seen Mark he’d thought maybe he’d been dreaming. He’d been sedated, after all, in a hospital bed. Mark had been gazing down at him, a concerned expression on his handsome face.

“Hi, good lookin’,” Troy had said, still slightly dazed. “Who are you?” And Mark had told him he was the detective assigned to find out what had happened to Troy. Why he’d ended up in a wilderness gully after being reported missing three days earlier.

Troy, despite his groggy state, had been unable to resist flirting with the detective, and had been thrilled when Mark had responded in like manner.

On the day Troy had been released from the hospital, Mark had picked him up and taken him home, making sure he had everything he needed for his ongoing treatment. He had called on him every day after his shift at the precinct, and when Troy was well enough they’d had sex—and as far as Troy was concerned there would never be another who could surpass Mark’s lovemaking. Troy in his drugged out days had not been too clever about whom he’d taken to bed. Most of his liaisons he couldn’t even remember—something that, now he was clean, troubled him from time to time. Still, he was sure that if anyone had come close to Mark’s prowess, he’d recall that person. So far, no one had come to mind.

He glanced in the mirror for the umpteenth time to make sure he looked his best. He’d combed his dark brown hair in the hope of taming the sometimes wild curls. He wished now he’d gone for the haircut he’d been putting off for over a week. Well, Mark said he liked curly hair… So here it was. The pale green shirt he was wearing was a good choice, though. Kinda makes my eyes look greener.

He and Mark had been dating for two months and the reason for Troy’s nervousness was that Mark had called to say he had something important to tell him. Their call had been cut short and Troy’s attempts to wheedle what Mark had to say out of him had come to naught.

Damn, but what could it be? That thought had persisted and pestered him all day. What if Mark was going to end things between them? What if he wanted to slow things down? Troy knew he could be a giant pain in the ass, always impatient, always wanting things his way, and right now. Maybe Mark had just gotten sick and tired of him. What would he do, if that was the case? Shoot himself? No, he didn’t like guns. Take an overdose? No, there no longer were any drugs in his possession. Throw himself off a bridge? No, he was scared of heights…

The knock on the door made him jump, but at least stopped him from thinking any more of those crazy thoughts. He rushed to the door and flung it open, and there he was, the most handsome man in the entire universe. In Troy’s estimation anyway. Even now, two months after they’d started dating, Troy couldn’t quite believe he’d snagged such a hot guy. Tall, six-two to Troy’s five-ten, wide shouldered with sandy blond hair and warm hazel eyes, Mark was the epitome of everything Troy admired in a man.

“Hey, beautiful,” Mark murmured against Troy’s hair once he had disengaged himself from the lip-lock Troy had forced on him before he even got through the door. “Can I come in?”

“What’s all this?” Mark asked, glancing around. Troy had set the table for two with candles and wine glasses.

“I thought we’d have dinner in.” He pouted a little. “It’s not like I haven’t done this before. You said you liked my cooking.”

“So what is it you wanted to tell me?”

Mark chuckled. “You mind if I take my coat off first?”

“Sorry… Here.” He took Mark’s coat and laid it over the back of the couch. “Want to take anything else off?” he asked, leering.

“Later. We should talk first.”

Every Breath I Take is a combination of romance and suspense.

J.P. Bowie has created an interesting story illustrating how abuse of the body affects the mind, or perhaps in some situation...

Share what you thought about Every Breath I Take and earn reward points.