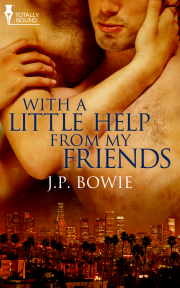 With a Little Help From My Friends

Drew's friend Wendy means well, but her attempts to set him up with a new man is driving him crazy—then he meets Cameron—who drives him crazy in a very different way.

When Drew Weston's six year relationship falls apart, his best friend Wendy is determined to find him a new love. It looks like she's not going to succeed, until she introduces him to Cameron Murdoch, who is everything Drew admires in a man—both in looks and personality. There's just one problem. Cameron has never been with a man before.

Drew is only too eager to ‘show him the ropes' but in doing so finds himself falling in love with the handsome, charming man. The realisation saddens him, convinced that now Cameron is ‘out' he will be a magnet for every red blooded gay male in the vicinity, and Drew will merely be the first in a long line of lovers.

With a Little Help from my Friends

Friends—with luck, everyone has at least a few, and at times, everyone needs them. Why was it then, when I, Drew Weston, recently reduced to the ranks of singledom after six years of being in what I thought was a monogamous relationship, found that my friends had morphed into annoying imitations of self-appointed yentas? All of them, it seemed, were only too eager to introduce me to every gay Tom, Dick or Harry they could possibly dredge up, either from the workplace or through ‘a friend of a friend’.

True, I had walked around as if in mourning for several weeks after Bill left me. Also true, I’d developed a bad habit of allowing tears to well up in my eyes at the mere mention of Bill’s name. However, that did not excuse my friends’ very unsubtle attempts to introduce me to some of the strangest men in the world. Where on earth did they find them? I wondered, on more than one occasion. If I’d spent night after night trolling through gay.com, I’d have had a hard time finding the equals of some of the deadbeats paraded in front of me on a regular basis—by friends.

I’ve never considered myself a fussy guy, with ridiculous expectations of the type of man who just might fancy me. I’m okay looking, I guess. Bill used to tell me I had beautiful green eyes and the cutest of butts, but I wouldn’t expect Ryan Reynolds to fall in love with me at first sight should I stumble into his path. However, I did, and still do, have standards, and finding a man able to string words of more than one syllable together to make conversation, was one of them. When I went out on a date, blind or otherwise, I liked to start the evening off with some pleasant exchanges. “What kind of music/movies/books/food/etcetera do you like?” That kind of thing. That simple, unchallenging, kind of thing. I figured I might have just been unlucky on the first three, four or five dates set up for me, but being stared at in silence throughout the entire meal was not something I dealt with easily.

Home after yet another bad date arranged by yet another well-intentioned amigo I stripped then jerked off. Well, I didn’t want blue balls, and going without regular release can do that to a fella. I poured myself a stiff drink, then sat on the couch and wondered where in the hell my life was going. I was twenty-seven and, up until about a year ago, had thought I was pretty settled. Good job in advertising, nice group of friends, before they turned into Matchmakers Inc., and a man in my life—before he cheated on me with a mutual friend. Ex-friend now, but at least, he wasn’t trying to fix me up with Mr. Wrong.

I stopped pouting long enough to answer my shrilling cell phone. I checked to see who it was. Mr. Wrong would go to voicemail. No, Wendy...

“I thought you had a date,” she said. “I was going to leave a message.”

“Oh...” There was such a long pause I could almost hear her brain whirring into action. Wendy had been responsible for two of my blind recent dates, and as bad as I’d told her they were, I knew she wasn’t going to give up.

With a strong plot, superb dialogue and witty banter, With a Little Help from My Friends by J.P. Bowie is an irresistibly charming and entertaining story.

...the author did a nice job of showing Cameron's feeling and struggles so that both protagonists were developed enough to really capture my attention. I particularly enjoyed the humor found throughout...

Share what you thought about With a Little Help From My Friends and earn reward points.