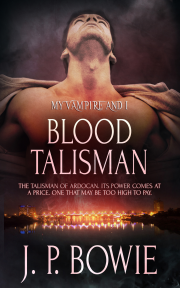 Book 8 in the My Vampire and I series

A thousands years old artefact is said to possess the power to reverse time and immortality—but is the price of that power to high to pay?

Several months after Dakar's demon army was defeated and Dakar killed in the conflict, Andrew Berés is still haunted by the memory of Dakar telling him there is a talisman that would reverse his immortality and allow him to live a normal life with his lover, firefighter Tommy Cordain. Despite Master Vampire Marcus Verano's doubt that the Talisman of Ardocan actually exists, Andrew is determined to find the truth of it once and for all.

His obsession leads him, Tommy, and their vampire friends on a journey to the ancient ruins of Babylon and to the remains of an underground city—the City of Ardocan—where legend has it, the Talisman is buried, its secrets hidden from eyes and minds for thousands of years.

But danger from enemies and traitors, both human and demonic, is never far away in the war ravaged country of Iraq, and Andrew may find out that the price he has to pay in order to obtain the Talisman, is greater than he had ever dreamt.

Reader Advisory: This book is a sequel to Blood Lust

The tall, dark-haired man stood outside the Los Angeles Central Library gazing up for a moment at the imposing Egyptian-themed edifice. Artfully illuminated at night time, each carefully carved symbol of the ancient world stood out in stark relief against the white-stone walls.

A wry smile touched his handsome, finely featured face as he contemplated the fact that the setting at least was appropriate for what he sought. The world of antiquity might just hold the key to unlocking the mystery he was determined to solve. Much of what he wanted for his lover and himself, might rely on the answers, positive or negative, he was convinced he would find within a certain tome housed somewhere in the archives of this building.

In just a few minutes the library would close for the night. He wasted no time, quickly passing through the main doors into the cavernous, marble-lined entry hall. He smiled at the security guard, knowing that he was about to tell him, 'Sorry, we’re closing'. Instead, the guard returned his smile—the power behind those ice-blue eyes immediately making the guard forget that the tall man dressed in a full-length black leather coat who now strode past him with purpose towards the door that plainly read ‘No Admittance’ had actually pushed it open and had disappeared.

The guard stood to one side as the library’s employees and a few stragglers exited, then he locked the doors and walked over to the security desk. Apart from the routine checks he would make periodically he would stay at his post until he was relieved at midnight by the graveyard shift.

Andrew Berés descended the flight of stairs leading to the underground archives. It was dark, the power having been turned off in any unnecessary areas of the library. Not that it deterred Andrew. He could see in the dark better than any cat, or bat, for that matter. His vampire vision could pick out anything within the murky recesses of the basement.

If I were the Talisman of Ardocan—where would I hide?

If not the Talisman itself—and it did seem unlikely that it would actually be among the artefacts and documents piled high before him—at least some mention of it, be it myth or reality. Somewhere here, there must be some clue, a cross reference perhaps pertaining to its existence, or non.

Andrew’s laser-sharp vision seared through the closed document boxes and crates, negating some as useless, pausing over others that looked as though they might be interesting, before dismissing them and moving on to the next box.

Marcus Verano, the most powerful of all vampires, had told Andrew he feared the Talisman did not exist, and at the time Andrew had been prepared to accept Marcus’ scepticism, yet the demon Dakar had insisted that it was indeed real. If Andrew were to doubt either man’s word, it would certainly be that of Dakar—a devious and treacherous demon, now dead. Dakar had inhabited Andrew’s lover’s body then had tried to seduce Andrew himself, all the while betraying his king by gathering a rebel force to usurp Kardis and take control of the Underworld region Kardis governed.

Yet hope, mingled with some doubt, remained in Andrew’s heart.

His lover, Tommy, was a brave and beautiful man with whom Andrew wished to spend the rest of his existence. But Tommy was mortal and worried that as he grew older Andrew would leave him for someone younger. Despite Andrew’s protestations to the contrary, he knew that in Tommy’s darker moments that fear still existed, and with it a wish that Andrew, too, was mortal, and that they would grow old together. Something that, as the months had passed, and their love had become stronger, deeper, Andrew had longed for with all his heart.

Tommy had offered to give him his lifeblood, had pledged to accept the ‘change’ despite the fact he would be distanced from his family and friends, something Andrew knew tore at Tommy’s heart and conscience. Because of his lover’s willingness to sacrifice his closeness with those he held dear, Andrew was determined to at least try to find an alternative.

He had not mentioned his quest to anyone, not even to Tommy. Why build up hopes within him if the search should prove fruitless after all? Nor had he told his best friend Jared Lantos, although he knew Jared would not judge his actions. Jared also had a mortal lover. Although frowned on by certain segments of vampire society, it was not all that unusual for vampires’ companions to be human. A regular infusion of vampire blood kept a mortal’s youthful appearance, delaying the aging process and giving him or her many more years of life. But they were not immortal, and eventually a decision would have to be made…

Andrew paused in his search and a shudder ran through his body. The thought of losing Tommy was not something he could accept, nor the desolation he knew he would feel as keenly as a wooden, silver-tipped stake to his heart.

There must be an answer! Somewhere in all of this there must be a clue, however small, however remotely connected to the Talisman itself. Something to give hope…

Despair filled him as he neared the final row of boxes. Perhaps Marcus was right after all, and Dakar would be proven a liar, perpetuating the demon reputation for evading the truth at all costs. Or perhaps, his search—though fruitless here as it had been in New York and Washington D.C.—should continue in some other archive—in Paris or Athens or— He paused again, a flicker of recognition dancing before his eyes.

Share what you thought about Blood Talisman and earn reward points.