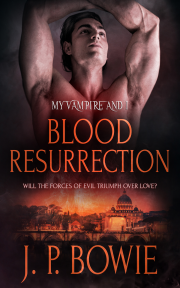 Book 4 in the My Vampire and I series

A centuries old demon using the power of the black arts holds the fate of the world in his hand — and only vampires can stop him!

When Bernard Fournier first meets Marcus Verano he has no inkling that the tall and handsome man is in fact a vampire. For eighteen years Bernard has lived a life of degradation in a monastery — abused and humiliated by those who should have sheltered and cared for him. When Marcus offers Bernard the chance of freedom he willingly accepts it, leaving the monastery without regret or a backward glance.

A victim of a plague that sweeps Europe in the 15th century, Bernard has only one chance of survival — and once more he accepts what only Marcus can offer — immortality. Time and distance eventually separate Marcus and Bernard as they make their way through the centuries. Bernard finds happiness in the arms of Pietro Dante, an academician employed in the Vatican library. All is well until the day when a demon force is unleashed upon the world in the guise of a new Pope.

Only Bernard and Pietro know of the demon's plans, and they find a strange ally in Constantine, the demon's son, who wishes to protect his mortal lover, Gustav. But the demon Pope is willing to sacrifice everything, including his son, for his ambitions. Even the threat of opposition from the Vampire Council headed by Marcus and his friend Joseph Meyer will not halt him in his plan to rule the world — and destroy all vampires in the process.

Can Bernard and his friends overcome the demonic plans to bring about the 'end of times', or will the forces of evil triumph over love and loyalty?

Perhaps God did hear my silent pleas after all, for it came in the form of a tall and handsome man, who arrived at the monastery late one night, requesting shelter from an impending storm. The monks and I had been busy shoring up doors and windows, getting the livestock inside and bringing enough food and water indoors to last them until the storm abated. The previous year, they had been confined within the chancery walls for three days. I, of course, had not been permitted to shelter there and had to huddle inside the stable, listening to the howling winds and lashing rain and wondering what would happen to me should the stable be carried away in the gale.

I watched with interest as Prior Hubert conversed with the tall man who had a military bearing and was dressed in fine clothes. Greedily, the Prior snatched the coins the tall man offered him then ushered him indoors, away from my sight. A moment later, one of the monks bade me to take the man's horse to the stable and bed him down for the night.

The horse was a fine steed, its saddle and trappings of the best quality, and I handled all of it with care as I stowed them away in a corner of the stable, before preparing to brush the horse down. In the distance, I head the rumbling of thunder, heralding the storm's approach.

"That's all right…" A deep, melodious voice behind me made me jump. "I'll take care of him."

This series just keeps getting better with every episode. The story is imaginative and daring, filled with terrific characters, both mortal and im! Can't wait for the next one - pretty please!

Share what you thought about Blood Resurrection and earn reward points.