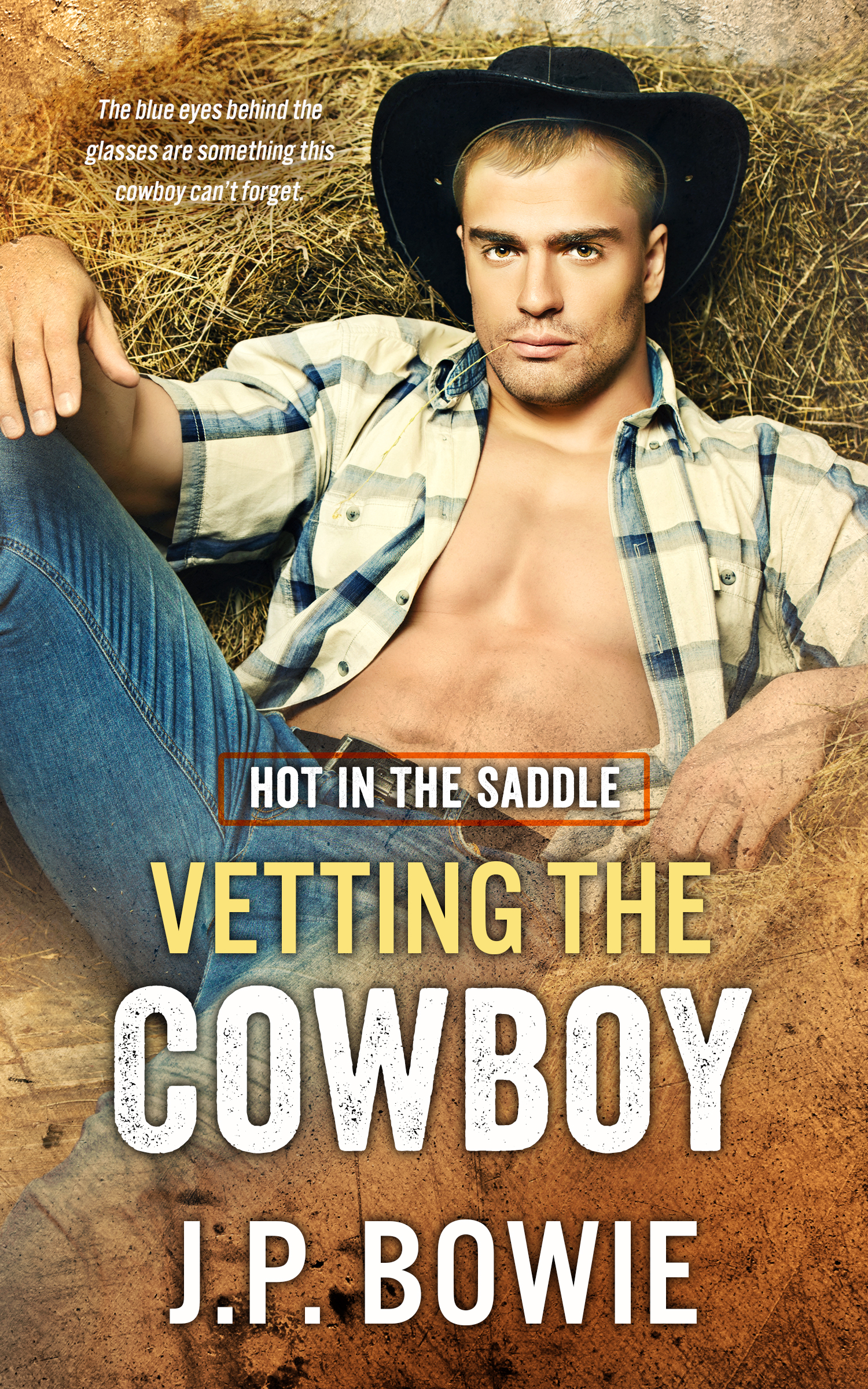 Book 1 in the Hot in the Saddle series

When Mike Henry, the new veterinarian in town, meets cowboy Seth Archer, it could be good times ahead—but Mike’s ex isn’t about to let him go without a fight.

Seth Archer, working cowboy on a dude ranch in Northern California, is thrown for a loop when he meets Mike Henry, the new veterinarian in town. The five-foot-eight bespectacled Mike isn’t Seth’s type, but the blue eyes behind the glasses are something Seth can’t seem to get past or forget.

Mike’s on the run. Well, not exactly, but he left Seattle to get away from Victor Torrens, a dominating boyfriend who turned abusive when Mike told him he wouldn’t be his submissive. Mike hasn’t worked with horses before, but it’s not long before his natural love of animals—and cowboys—makes him decide to call the small town of Denton home.

Seth and Mike bond, but their love affair might just be doomed before it truly begins when Victor sends Alex Brand, a celebrity bodyguard, to strongarm Mike back to Seattle.

In order to protect Seth and his new friends from Alex’s big fists, Mike may be forced to make a decision he’ll regret for the rest of his life.

Reader advisory: This book contains scenes involving an abusive ex. There are threats and memories of violence, car accidents involving death and a scene involving attempted abduction with violence.

Parker Jones stared at the empty stalls in the stable with a look of disgust. “Randy? You in here somewhere? Randy?”

No reply came from anywhere in the large horse barn. Eight stalls stood empty, which was just as well—they were in dire need of mucking out. Horse manure and dirty straw had been trampled into the ground. Fortunately, the horses were either out in the pasture or being ridden by at least two new customers to Parker’s dude ranch, the Seven Plus Ranch.

“What’s up, boss?” It wasn’t Randy answering, but Bob, one of Parker’s older hands.

“No, I haven’t. I thought maybe he’d called you, sayin’ he was sick or somethin’.”

“No, he didn’t, but I’ve been on the phone for the last coupla hours with the bank, so he maybe couldn’t get through.” At least I hope that’s what it was. If he starts sneakin’ out on me again… Last week Randy had been a no-show two days running, and when Parker had asked him for an explanation, he’d become belligerent. He hadn’t gone so far as telling Parker it was none of his business, but Parker had guessed from his expression that it was foremost in his mind.

“Trouble?” Bob gave him a worried look. “About the bank, I mean.”

“No, just some new stuff they want to throw my way. A lot of perks if I invest some more money. The usual.”

Bob chuckled. “I wouldn’t know about that.”

“Right…well, those stalls need mucking out pronto, before the stink becomes obnoxious. I know the customers expect a ranch to smell like horses, but not that much horseshit.”

“No, I need them tending to the horses out on the pasture. I’ll give you a hand.”

“Yes, me boss. The day I think I’m too good to muck out a stall is the day I’ll call it quits. Now, let’s get on with it before they bring any of the horses back. There’s a good two or three hours of work here.”

Parker had a feeling Randy was on his way out but didn’t have the guts to say so. He’d been surly the last couple of days and had shown up late without much of an apology. In Parker’s opinion, Randy had a bunch of anger issues and needed counseling. Parker considered himself a laidback kind of guy and didn’t ask his men to do anything he wouldn’t do himself, but he did require a certain amount of diligence, and he absolutely hated tardiness and no-shows.

Running a dude ranch hadn’t been Parker’s burning ambition. It had been Royce’s idea in the beginning, but his enthusiasm had won Parker over and, since they’d opened it six years ago, they’d had their share of success. Guys—and some women too—came from all over for a taste of the old west, chaperoned by Parker’s experienced cowboys, who made sure nobody did anything rash or hurt any of the horses. In the early days, there had been one or two incidents that had made Parker glad Royce had insisted on really good insurance. But Royce was an attorney and clever as all get-out, so Parker was in good hands there.

Really good hands, it so happened, and had been for the past ten years. Parker smiled to himself, recalling how much his life had changed since he and Royce had hooked up, moved in together and finally bought their own home and ranch. They’d had their ups and downs, just like most everyone, but they had figured out early on that the way to harmony was to talk out their differences of opinion before they became major problems.

His cell phone chiming in his jeans’ back pocket had him grinning. Bound to be Royce. It was that time of the day.

“Must be the sound of your voice. Right now I’m muckin’ out the stalls ’cause some lazy fucker didn’t show…again.”

“Would that lazy fucker be Randy?”

“Not really, but I’ll have to find a replacement. This old back of mine isn’t taking kindly to physical labor, I don’t mind telling you.”

“Thirty-eight is not old, Parker. If you didn’t go around falling off horses all the time, your back would be just dandy.”

“All the time? I can count on one hand the amount of times I’ve been thrown, and one of them was your fault.”

“Well, it’s true. You strutting around with your cute little ass in those tight, tight jeans and pretending to be so high and mighty put me in a mood, so I wasn’t paying attention to what I should’ve been doing!”

“Excuses, excuses. Anyway, how bad is your back? Can’t you get one of the guys to take over?”

“Bob’s helping, but I want to keep the other guys with the horses and there’s two customers getting riding lessons. We’re almost done anyway. I’ll have Bob hose down then we can get the clean straw laid.”

“Well, take it easy after. Remember, you still have your husbandly duties to take care of when I get home.”

“You are insatiable,” Parker said through his laughter.

“And you are one lucky man. Okay, I’ll let you get back to your mucking.”

Parker was still grinning when he shut his phone off. “That Royce?” Bob asked.

“Yessir. Checkin’ up on me, making sure I’m workin’ hard.”

“No doubt of that.” Bob leaned on his rake for a moment. “For a man that owns and runs this place, never saw anyone work harder than you.”

“Not the right time of year, Bob,” Parker said grinning at the older man. “’N’other coupla months.” He turned at the clatter of hooves behind him. “Hold up, Seth. We’re not done with all the stalls yet.”

“Bonney’s limping some,” tall, blond Seth Archer told him. “Thought I’d bring her in for a looksee.”

“Left foreleg, I think—seems to be favoring it a bit.”

Parker knelt in front of the mare and ran his hands up and down her leg. Bonney, one of their calmer horses, and popular with newbies, stood patiently while Parker did a quick examination. She whinnied softly when Parker lifted her hoof off the ground to take a look.

“Here’s the problem. Looks like an abscess. Better call Doc. Walker, have him give us an opinion. Don’t want to mess with something like this…might be nasty.” Parker frowned. “We better check all the horses, limping or not, just in case.”

“Okay, boss.” Seth paused then asked, “Why are you cleaning out the stalls? Where’s Randy?”

Parker straightened and gave the handsome cowboy a rueful look. “No-show, so Bob and me took over. Place was a pigsty. Seems like he’s been neglecting his duties lately.”

Parker grunted. “Well, my fault too. I usually come around at the end of the day to make sure they’re all bedded down nice, but the last couple of nights we’ve been busy entertaining some maybe investors. Bad excuse, and one I won’t be using again.”

“Well, if you’re busy any time, just give me a call and I’ll stop by and check up on them. I live nearby.”

“Thanks, Seth, appreciate it. Call Doc. Walker for me while I clean up here, and have him come over soon as he can.”

“Will do.” Seth pulled his cell from his back pocket and punched in the doctor’s number. All the hands had the vet’s contact programmed into their phones for emergencies. “Hey, Doc, Seth over at Seven Plus Ranch. Parker asked if you come check up on one of the horses. Bonney…she’s limping and Parker think it might be an abscess. Oh, right…that’s good, see you later.”

Share what you thought about Vetting the Cowboy and earn reward points.

Other books in the Hot in the Saddle seriesView Series Page