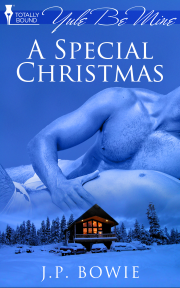 Yule Be Mine collection (Book #1)

A romantic hideaway on a snow-covered mountain — what better place to meet the man who could heal a broken heart?

Question: What's Brett Masters to do when his best laid plans for a special Christmas alone with his lover in a mountain cabin resort get axed because the lover up and leaves? Brett's first instinct is to just suck it up, go home early and spend the Yuletide with his family — but it might have been a good idea if he'd called the airline and changed his flight to an earlier one.

Thwarted, he decides to use the cabin he's paid for, all the while wondering if this form of self punishment is such a good idea. A romantic hideaway without the romantic partner — what's that about? But fate steps in and takes him for a spin in the arms of Devyn Weston, the resort manager's hunky brother.

What's Brett to do when he and Devyn get stranded by a snowstorm?

“Just hear those sleigh bells jingling, ring-ting-tingling too. Come on, it’s lovely weather for a sleigh-ride together with you…”

As he slowed his BMW almost to a halt on the crowded freeway, Brett Masters groaned and snapped off his car radio. No way was he going to start being bombarded with Christmas songs this early in the year! Especially in his present frame of mind. Grudgingly, he had to admit it wasn’t all that early. He’d actually been preparing for this particular Christmas for some time, ever since he’d got Jamie to agree on a Christmas Eve and Christmas Day for just the two of them—alone in a log cabin hideaway up in Big Bear Mountain…

It had taken a long time, and all of Brett’s considerable salesman technique, together with lots of kisses and caresses to convince Jamie that it would be fabulous, and that their respective parents wouldn’t mind if they showed up the day after Christmas to join in the family celebrations.

That last part had been the most difficult to navigate, and Brett had spent a lot of time on the phone with his mom then Jamie’s mom, explaining that as it was his and Jamie’s fifth Christmas together and he wanted to make it a really special one. His mother had positively whined at the prospect of a Brett-less Christmas, but he’d remained adamant. After all, for the past five years he and Jamie had accommodated their families by celebrating their Christmas together early then flying off Christmas Eve—Brett to Kansas City, Jamie to Jacksonville, Florida—to pass the next three days surrounded by their many siblings and their siblings many, many kids.

“Imagine what it’ll be like, Jamie,” he’d whispered in his lover’s ear after what he remembered now as an extremely hot bout of sex. “Just the two of us waking up on Christmas morning together—no kids jumping up and down on the bed, demanding that you get up right now and help them open those scads of gifts they get every year.”

They had compared notes after every Christmas and had laughed repeatedly at how similar their Christmas mornings were, all those miles apart.

4-1/2 Stars This holiday gem came to my attention a couple of years ago but fate and time just wasn't on board and I didn't get a chance to read it till now. I just wanted to wrap Brett up in bubbl...

...sure to lift the reader's spirits...a delightful cast of characters whose flaws make them surprisingly authentic, sympathetic and likeable...a delightfully sexy short story

Share what you thought about A Special Christmas and earn reward points.