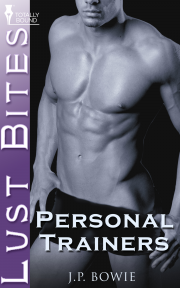 A three-way brings a young man the realisation that great sex can make a man fearless!

When Robin Carter, feeling blue, out of shape and harassed by a bullying supervisor, sees an Ad promising a return to the physique of his youth, and a resurgence of self-esteem, he immediately answers it.

Meeting with Jack Kelly, Personal Trainer, certainly invigorates Robin's sex life, especially when he meets Alex, a yound lady eager to have Robin take a walk where few gay men tread. With his sexual libido enhanced by these hot encounters, Robin's ready for love - and more than ready to punch his sneering supervisor on the nose!

I have never been a gym bunny—actually I’m too old to be any kind of bunny really. Thirty-one last birthday. Middle aged, over-the-hill, and all those other cruel and nasty things people like to put on your birthday card when you pass the thirty mark. Fortunately, I’d been blessed with a fairly trim and athletic body, but standing in front of the mirror one day after stepping out of the shower, I noticed bulges where there ought to be none—namely around my waist. Yikes...love handles! Double yikes as I stood sideways...the beginnings of a potbelly! Oh no, this would not do, I thought, slapping at the bulges as though I could beat them into oblivion. I frowned at my reflection as I combed my dark brown hair. Nothing for it, Robin, I thought. Gotta sign up at a health club, before you start to look like Jabba the Hutt! All the way to work on the subway I fretted. Every time a guy looked my way I’d think he was staring at my thickening middle and mentally crossing me off his list of potential boyfriends. Man, talk about paranoid! At the coffee shop outside the building where I work, I ordered coffee, black, no sugar—and definitely no cheese Danish! My office is on the third floor, but that morning I ignored the line at the elevator, and took the stairs two at a time, arriving at my desk thoroughly winded and even more determined to start some kind of exercise regimen. I sighed as I read over a memo from the boss stating that the company’s figures were way down for the year, and although he didn’t actually say it, he more or less blamed the employees for this regrettable state of affairs. I looked around the office and almost felt the blanket of gloom that had settled over my fellow workers. The depressing start to the day became even worse as I watched Dan Waters, the office jock, preening in front of the water cooler. Dan was hot, and boy, did he know it. Twenty-six years old, and already the office supervisor, he was tall, built, hunky—and a total asshole, always ready with the put-down, and smart-aleck remark. Seeing him put the make on the office girls was enough to turn my stomach. The guy had never mastered the art of the cool approach. He was all swagger and pretension, with no subtlety whatsoever. I hated him. I’d have jumped his bones, but I hated him, and there was definitely no love lost between us. He smirked, catching my eye, as he scanned his domain and we lesser mortals arranged therein. “Hey, Carter...” He sauntered to my desk, giving me the fish-eye. “You get the memo?” “We all got the memo, Dan.” “So, you going to do better this week? Your figures are way down, you know.” “I know,” I mumbled. “It’s the time of year.” “You mean it’s your time of the month, doncha?” he sniggered. “Well, let’s see some improvement...” Or you’re outta here was the implication, left unsaid. I flushed crimson with anger and embarrassment. I had been with Barclays Financial for seven years and had been their top producer since day one. I should have been Dan’s boss, not the other way round, but his Daddy being the CEO had definitely swung the odds in his favour. As far as Dan was concerned, the memo I’d just read hadn’t been enough of a warning for me. He just had to rub it as a special treat for me. It galled me when I thought about the times I’d brought clients to Barclays after cold-calling on my own time and on my own dime. A couple of the other guys sent me looks of sympathy after Dan had strutted back to his office, but I was already over it. The money at Barclays was good—too good to let an oaf like Dan Waters goad me into quitting. An oaf with a great butt—but one that I would have gladly kicked at that moment.
Buy Now

Hot, hot, hot! From almost the first page this little story is packed full of steamy manlove, with a bit of hetero loving thrown in for some spice, and it just adds more flavor to the mix.

Share what you thought about Personal Trainers and earn reward points.