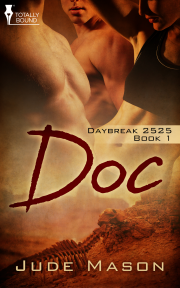 The son of a healer and a warrior, Doc is forced to take on both roles when his village is destroyed and his lover…gone.

Returning from a visit to one of the outland farms, Doc finds his village destroyed, his family either gone or dead and his lover vanished without a trace. The few survivors hidden among the ruins tell a tale of ruthless, sadistic marauders taking what they want and burning the rest. Doc finds too many dead and his heart breaks for those he finds alive. Mothers whose children are gone, husbands who have lost everything and everyone.
Pulling as many people as he can together and tending their wounds, Doc vows to find the rest of his people. His father is among the dead, but his mother, his sister and lover are not.
The hunt is on.
Reader Advisory: This book is number one in a series and best read first. Contains scenes of hot m/m and m/f intimacy.

Terror stopped and froze him in his tracks. The scene confronting him was one he’d seen before but never dreamed he’d see here. Not his home. Not his tribe.

It was daybreak, and the view of his village from the top of Elk Ridge had always made his heart beat a little faster. The prospect of being home, in his lover’s arms, had made the joy of returning a special occasion. Now, all he saw were smouldering piles of wreckage and bodies sprawled where they had no right to be. Bodies that, for a moment, he feared looking at too closely.

While his mind raced, he peered at those closest to him and tried to identify them. Unfamiliar faces, clothing he’d never seen before… He sighed, greatly relieved he didn’t recognise any of them. The few wooden buildings in the area leant precariously, one way or the other, and smoke rose in winding columns of dark grey from many of them. The breeze picked up, sending pale wood ash into the air, and a new flicker of fire flared up at the base of what had once been the trader’s cabin. The smoke drifted away from him, and knew that was why he hadn’t heard or smelled anything on his way in. Rags and paper blew around the central meeting square, which was empty except for the fire pit and its pile of split wood still stacked neatly beside it.

He dropped the satchel filled with his doctoring tools and herbs to the grass and unslung his bow. It was a small affair, made of some mysterious alloy manufactured before the big war.  He’d discovered it in what remained of the old city to the north and found it easier to aim than the long bows he’d been using. With a great deal of practice, the small weapon had proven extremely accurate, and he rarely travelled anywhere without it. An arrow in hand, he automatically notched it but didn’t draw it back. When he leant down to pick up his satchel, he saw movement below and again froze.

squinted, hoping to see Jazz crouched amid the piles of rubble. His mother and father would be there, and his sister Robin—unless they were dead. Just thinking about it made him cringe. The warriors, where were they?

He noticed several of the bodies ahead were very small. His stomach churned.

More movements below caught his attention. The familiar figure of a white-haired elder shambled out from under one of the heaps of debris. Each tribe in the region seemed to have at least one person who kept the histories of what had taken place over the last few centuries, passing on stories from one to the next. Seth was one of these ‘Rememberers’, keeping the records of their tribe. Being the oldest person, he’d lived through much of what needed recalling.

The wind turned, and got his first whiff of the fire and of the burnt flesh. His belly rumbled. He swallowed bile and gagged.

Straightening up, he squared his shoulders and looked carefully around. The woods surrounding the village remained undamaged and quiet. There were a thousand places to hide. He watched for several heartbreaking moments, knowing he had to be sure those who’d attacked were gone before he ventured in.

When he was confident no one remained in hiding, he returned to the path leading down the hillside. His pace quickened until he was jogging. He scanned the brush on either side as he hurried on his way. Visions of the atrocities he’d seen, mingled with flashes of his family, and Jazz, his darling, sexy Jazz, leapt into his mind.

Jazz, the man he’d grown up with and had fallen head over heels in love with a handful of years ago, kept returning to his thoughts. If these were simply marauders, Jazz would have fought and probably died trying to protect the tribe. But if the attackers were after slaves or trade goods, the outcome might have been much different.

He thrust both of those thoughts aside. He couldn’t bear to think of Jazz dead. Captive or slave might be worse in some ways. ’s heart lurched. At least you’d be alive, my love.

“Just let it go,” he muttered under his breath. “Wait until you know what’s true.”

He knew his own advice made sense. Hell, he’d preached it enough to others. Until now, he’d understood the message—but never so deeply or how important it was to follow.

Nearing the outer edge of the village, he noticed the well and gave a huge sigh of relief. Undamaged. They would at least have clean water. He’d need it if there were survivors to care for. He prayed there’d be an ample supply of those.

He slowed his pace, unwilling to rush into the horrors he knew awaited. The smell of blood filled his nostrils, and he wished he could wake up from the nightmare.

Share what you thought about Doc and earn reward points.

Other books in the Daybreak 2525 seriesView Series Page