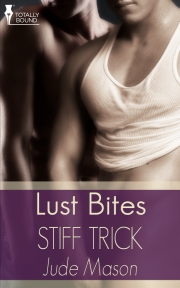 An undercover cop, a hoodlum with a chip on his shoulder and the drug lord from hell - who wins and who dies?

Nate's one of drug lord Sam Delany's body guards and while he might not be completely happy with his life, he's grown accustomed to it. Enter Jason Kemp, gorgeous, dark-haired hunk who also turned out to be a cop. Nate's world is turned upside down when he not only falls for the cop, but winds up craving to submit to the man.

An ultimatum from Jason and a race to collar Sam Delany could cost Nate his life. Can Jason's hair brained plan work, or will his Sklave wind up paying the deadly price.

“If you want to stay, you’ll have to abide by the rules.” Jason’s voice was barely loud enough for Nate to hear. Nate had known the ultimatum was coming but wasn’t sure he was ready for it. “You know what I am. I can’t have you living with me if you’re still one of Sam’s boys.” Snuggling into Jason’s arms, Nate took a moment to enjoy the slip and slide of his lover’s flesh against his own. Rumpled bedclothes tangled around both his and Jason’s feet from the exuberant fucking they’d just shared. Pillows lay here and there, one tucked beneath his hip, another at his feet. The rest they’d tossed on the floor while wrestling on the bed. His ass hurt. “I know, and I also know I’m ready to ditch Sam and his little empire,” he murmured, the soft downy fur on Jason’s chest tickling his lips as he spoke. He slid his hand over the man’s chest and down his well-muscled belly. The temptation to grab his cock was nearly overwhelming, but it wasn’t the time. That had passed. “Sam’s not going to let me go just because I want out, you know that.” Jason turned onto his side, facing Nate. In the dimly lit room, the man’s eyes appeared as black as the hair he kept in a ponytail. A day old growth of beard added to the sinister look he’d apparently adopted for this undercover operation. It was also one of the things Nate had found so attractive about him. He loved ‘em big and rugged looking. Jason Kemp filled the bill, and more. He was a hunk. Well over six and a half feet tall and sporting a sneer at the slightest provocation, he’d gained a rep as a real hard ass. Sam had liked his attitude and taken a real shine to the undercover narc. From their first meeting at the run down bar Sam Delany used as his store front, when Jason had tossed one of the drug lord’s bodyguards into the street for being less than polite, they’d gotten along like two peas in a pod. Nate had watched and understood the boss’ attraction, had felt it himself, yet he had wondered what was ‘that’ special about him.
Buy Now

“Stiff Trick” manages to pack a lot into a short space. The characters are well-delineated and their actions are believable...For a story full of excitement and adventure, with characters who sho...

Share what you thought about Stiff Trick and earn reward points.