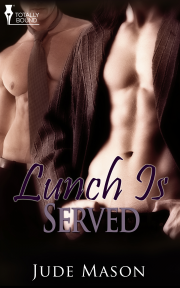 Admitting you're gay is difficult enough. Can Philip Sands go even farther and admit he wants to be dominated?

An evening meeting, which turns out to be so much more, only adds to his torment. When Mark invites him to come in for lunch the following day, Philip jumps at the chance. Will their meeting turn into more? Will he finally find the courage to tell Mark his feelings? And what does the handsome Mark have in mind?

Publisher's Note: This story was released as part of the Naughty Nooners Anthology by Totally Bound Publishing.

Philip sat in the front seat of the Toyota sedan, which he’d parked outside The Gate Club, and thought about what had brought him to that moment. He squirmed, trying to get comfortable, and smiled, knowing comfort wasn’t going to happen for at least a few hours. Mark Freeman had seen to that.

He’d met Mark a few short weeks ago when he’d applied for the waiter’s job at The Gate Club. Philip had known what kind of club it was, and he knew all about the Gate Room where members had to pass a security check before they could escort their ’pets’ across the threshold.

That meeting was burned into Philip’s memory. If he lived to be ninety, he was sure he’d remember that darkly handsome man ushering him into his small office. Philip was tall and well muscled, but had nothing on Mark. He was a good six inches taller and outweighed him by at least thirty pounds. The tight black slacks and silk shirt did nothing to hide the man’s bulging muscles. Tendrils of dark hair curled over the top of his fitted, white silk shirt, and when he’d reached out to shake hands, Philip’s eyes had been glued there. Only when Mark had gently cleared his throat had Philip dragged his attention back to the reason he’d come. A job, yes, he needed a job and the one being offered fitted him perfectly.

“Why don’t you sit down and we’ll get right to business,” Mark suggested and nodded at the leather chair on the visitor’s side of the desk.

“Thanks, Mr Freeman,” Philip replied and hurried to sit down, knowing an erection was imminent. At least seated, it wouldn’t be so evident. The chair was comfortable, and while Mark glanced through his résumé, Philip got the chance to look around the room.

Books and files lined about half of the wall behind Mark while six monitor screens filled the other half. The screens were blank and Philip wondered what he’d see if they were switched on. Mark’s desk was mid-sized and made of dark wood; the corners were padded with the same black leather as the chairs. He glanced around and saw a tall metal cabinet that took up most of another wall. Its doors were closed.

Share what you thought about Lunch is Served and earn reward points.