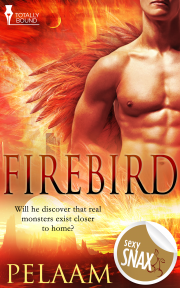 Cassian is the bait when his Monarch wants to trap a Firebird. Are Firebirds beasts, or will Cassian discover that real monsters exist closer to home?

Palace scribe Cassian is stunned when he’s called before his ruler, Great Monarch Maurus, to be the bait for trapping a Firebird—a dangerous predator and a beast of legend that lives high in the mountains of his country’s border.

As he climbs a mountain, Cassian is injured, but a Firebird rescues him. Cassian discovers that Firebirds are not animals. Instead, he uncovers Arturri, an intelligent being from another world, living as a castaway. But Cassian is helpless to prevent Arturri’s capture by Maurus’ dangerous and evil head of security, Phrixus.

When the secret beneath the palace is revealed, Maurus is more monstrous than even Cassian ever imagined. Who can Cassian trust? Can he save not only Arturri, but also the other prisoners of Maurus?

Reader Advisory: This book contains a scene of attempted rape and sexual abuse.

Aware of the smirks from the guards as he walked across the pink and beige checkered courtyard, Cassian kept his head high and tried to put them from his mind. He had been summoned by his King, Maurus the Magnificent.

His stomach roiled and a wave of nausea rolled over him. To be summoned usually meant that something was going to happen—and not in a good way. Cassian sighed. He ran a hand through his hair and hesitated, looking at the steps that led up to the palace. Gold ran down each side and the center was inlaid with red, Maurus’ favorite color. Even these had to display Maurus’ self-proclaimed magnificence.

Taking a deep breath, Cassian glanced down at himself critically.

He’d chosen over-the-knee boots in soft, supple brown leather that almost matched the brown of his leggings. His jerkin of muted gold reached, modestly, to mid-thigh. Those who wanted to catch the ruler’s attention wore them higher, barely covering their buttocks in a blatant display. Cassian had no such interest in his ruler, although he did prefer the company of his own sex. All he wanted was to complete his enforced tenure as a palace scribe and get out as soon as it ended.

And hopefully he would make it through as little molested as possible.

He was no different from many at the palace. All children deemed to be above average intelligence were taken from their parents and schooled by Maurus in secluded academies. That was how he’d ended up there, miles from home, isolated and alone. He knew he wasn’t in a unique position, but Maurus did not tolerate the scribes mixing socially. Although Cassian managed to keep a modest apartment outside the palace, he spent only one week in ten outside daily service and he knew that the monarch’s spies watched scribes who were on home leave.

Unfortunately, it was impossible to have a meaningful relationship while he remained employed within the palace. He’d been caught out that way when he’d arrived, a couple of years ago after completing his studies. King Maurus, however, seemed to be satisfied with him as one of his junior scribes and Cassian had done all he could to avoid the King’s eye. Mounting the steps, he tried not to let his trembling show.

His gaze briefly met that of a guard standing outside the huge, magnificent, gold-covered palace doors. The look Cassian received contained a mix of disdain, lust and smugness that made his skin crawl. Steeling himself, he met the look steadily.

“He is waiting.” The guard reached for one of the doors.

The guard on the other side matched his movement and Cassian waited while the doors opened slowly. He then began his walk along the well-guarded passageway. He ignored the whispered comments and innuendos. The guards had no respect for the scribes or ‘pen-pushers’ as they had been dubbed.

Cassian was well aware that guards were selected not for their intelligence but for their strength and brutish natures. A part of him pitied them in that respect, but a larger part feared them, which was exactly what they and King Maurus wanted.

The last two guards rapped on the doors they guarded before pushing them open to reveal the King’s main reception room. It was immense with long, thin, stained-glass windows that all began above head height. Massive iron chandeliers hung, offering reasonable quality lighting. Cassian admired the priceless artworks that adorned the walls. Not that Maurus appreciated them for any reason other than he knew that they impressed his visitors.

However, the most impressive sight was that at the far end of the room. There, a stained-glass window of enormous dimensions showed an enthroned ruler holding out his arms in benediction over his people. From the lowest caste to those wearing crowns themselves, all knelt before him.

The throne that Cassian approached was the physical embodiment of the one depicted in glass. The picture was of the Monarch’s grandfather. The man he dropped to his knees before, however, was also hard, cold and calculating like his ancestor. Cassian dipped his head forward and kept himself prone, waiting for his monarch to speak.

Waiting for Maurus, Cassian became aware of another person walking around him. Whomever it was stopped behind him and Cassian began to feel more and more uncomfortable in his vulnerable position.

“You may rise, Scribe Cassian.”

“Thank you, Great Monarch.” Cassian stood, mindful to keep his eyes down, and wished he could see who stood so close behind him.

This is not a pretty tale, or a sweet romance, but I got caught up in wanting so much for Cassian and Arturri to be safe. The flying scene in the epilogue was beautiful and the few love scenes between...

I love variations on the Firebird tale in any form, so I was thrilled to pick this up. Pelaam delivered a well-written, sensual story that went beyond my expectations. It was an unusual take on one o...

What can we expect from Firebird?

Firebird is science fiction and a little darker than most of my books. On Cassian’s world, a Firebird is a dangerous predator of legend that lives high in the mountains. However, Cassian not only discovers that the Firebird, Arturri, is a castaway from another world, but that the true monsters are far closer to home.