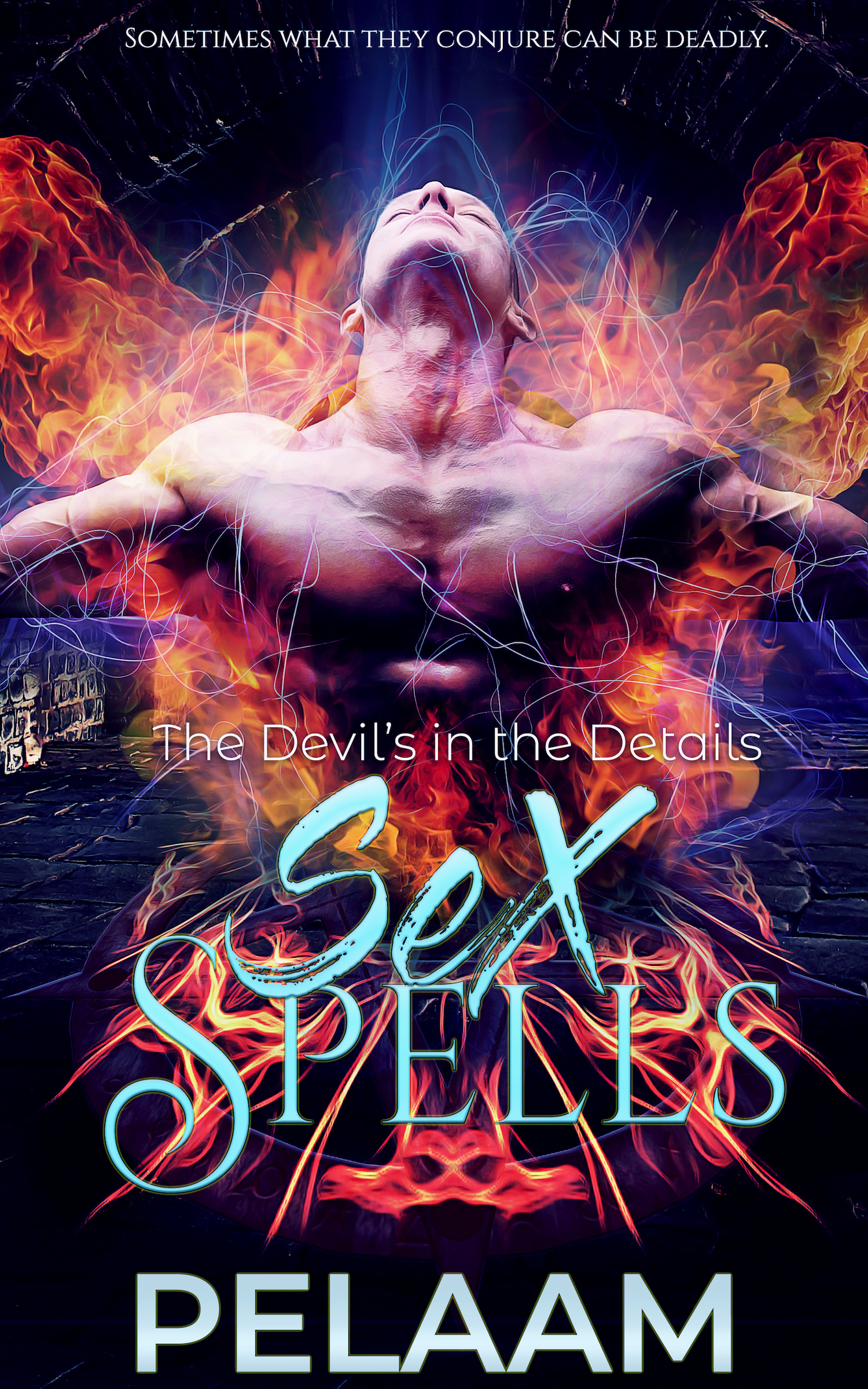 Book 1 in the The Devil's in the Details series

Sex spells… Sometimes what they conjure can be deadly.

After being dumped by his latest boyfriend, Aiden lets a friend talk him into visiting a sex spells shop to get a spell or charm for good luck in love. The charm appears to work when he meets Lyall, the man of his dreams.

Garen, a special investigator of paranormal activity, is called in when a victim is found burned to death in his bed. With the help of his husband Luke, he looks for the link between subsequent victims to discover how to stop the demonic power that’s killing them.

When they find the link is Aiden, who is being used by a practitioner of the dark arts to conjure a demon of fire, it becomes a race against time to save him from becoming the final victim and thereby unleashing one of the most powerful fire demons ever known.

While Luke must try to protect Aiden and Lyall from a demonic force, Garen must face the demon’s summoner.

Reader advisory: This book contains scenes of violence, descriptions of corpses and some homophobia from a minor character.

The morning was dragging with interminable slowness, and Aiden looked at his watch for what seemed like the thousandth time. He groaned softly. The minute hand had only dragged itself another measly ten minutes farther on.

“Only nine-fifteen. Are we sure the clock’s not slow? I’d have bet my lunch it was closer to ten than that.”

“Sorry, Aiden. Clock’s all good. It’s just one of those really slow mornings.” Amanda looked up and grinned at him. “We haven’t even had the food trolley come around yet. That should have given the game away.”

“I wasn’t listening for that.” Aiden stuck out his bottom lip. “Fuck it all. I’d swear time’s moving backward.”

“Head down, bum up, mate.” Jacqui laughed out loud. “You’re not going to tell me you haven’t got things to do?”

“No, of course not.” Aiden shook his head. “It’s just… I want my break, a coffee and something sugary.”

“Here. Have this.” Amanda handed Aiden a couple of pieces of chocolate and Aiden smiled. Amanda, like he, preferred dark chocolate, and she always had a bar or box of the good stuff stashed away. Aiden preferred a few squares of superior chocolate over a bar of lesser quality every time.

“Thanks. That’ll keep me going.” Aiden broke off a square and bit it in half, letting it melt on his tongue. There were advantages to being the only guy in the department. The older women tended to mother him and those closer his own age treated him as an equal.

Normally his job as a scheduler for hospital bookings kept him busy. But his boyfriend had been away for a couple of weeks. Dolan was due back on the weekend and, for Aiden, time was dragging by, second after painful second.

By the time morning tea break arrived, Aiden was ready to climb the walls. Sometimes he took his break with other schedulers in the nearest tearoom, but today, Aiden hurried to the canteen to meet up with Farrah, who worked in the hospital’s finance department.

The coffee there wasn’t bad, and Aiden decided to indulge in a muffin to celebrate his boyfriend’s imminent return. With Farrah close behind him, he found a table at the far end of the canteen to sit and talk.

“How many hours now?” Farrah winked at Aiden. “You’ll be counting the minutes next.”

“That’ll be tomorrow night.” Aiden hugged his cup to his chest. “The plane gets in from Auckland early Saturday morning and I said I’d pick him up. Fuck, it’s only been two weeks, not like it was any real length of time.”

“Must be twue lurve.” Farrah snickered.

“Piss off.” Aiden’s tone remained good-natured. He and Farrah had been friends forever, but Farrah had a long-term boyfriend. They were even discussing marriage. By comparison, Aiden felt like a distinct Cinderella. He’d only had a handful of long-term boyfriends and no luck with any of them. Dolan will be different. I’m sure of it.

“Got anything planned?” Farrah asked.

“Yep. I booked a nice intimate meal for two for Saturday night, then I don’t plan on leaving the house at all on Sunday.”

“Nah, I just thought he’d like a quiet night.” More than once, Aiden had been dubbed ‘vanilla’, and it had never been said as a compliment.

“I’ll be honest. I really didn’t think you were his type. I was wrong.” Farrah shrugged. “I thought he was only due to be away for a few days. When did it become two weeks?”

“Oh, he went on a seminar for the hearing-aid company he works for. Then he decided to extend it into a visit with family and take a few days’ holiday while he was there.”

“Couldn’t you have gone as well? You haven’t taken time off in an age.”

“Well, I’m saving my leave for a big holiday. I want to take a month off, maybe go to Australia for a few weeks. Plus, Dolan isn’t out and proud. He won’t deny it if asked, but he said it was too much of an invasion of his privacy if he were to turn up with a boyfriend in tow.”

“We’ve only been seeing each other a couple of months or so, but I’m sure there’s a good connection between us.”

“Less the time he’s been away.” Farrah held up his hand as Aiden went to protest. “You’ve been hurt in the past. I don’t want you hurt again. If he makes you happy, then that’s all that matters.”

“Thanks, Farrah.” Aiden was glad he had such a genuine, caring friend. Farrah had always been there for him. “I’m really looking forward to having him back this weekend. Feels like forever since I last saw him.”

“You’ll be jumping his bones the moment he walks in the door.” Farrah sniggered as Aiden adopted his most indignant expression.

“As if.” Aiden sniffed loudly, then chuckled. He wasn’t one for doing things spontaneously, or being particularly adventurous, but he was hoping Dolan would jump him.

This was a pretty good start to the series. A guy dealing with bad breakups thinking he’s going to get help with a love potions or something, only to find out he’s in the middle of a set of murde...

Share what you thought about Sex Spells and earn reward points.