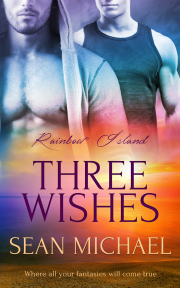 Book 1 in the Rainbow Island series

I have to say that Sean Michael did an amazing job on this book and has me on edge when it comes to reading the next book.

The idea of ‘Three Wishes’ is interesting...If you like to explore different kinds of D/s relationships and some of the more unusual kinks, this is a good book to give you a flavor of some of th...

Share what you thought about Three Wishes and earn reward points.

Other books in the Rainbow Island seriesView Series Page