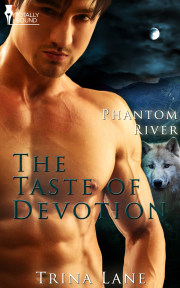 The Taste of Devotion PRINT

Book 3 in the Phantom River series

One man searching for a place to call home stumbles into the arms of another wishing for a mate to complete his.

Cooper Tessen, enforcer for the Phantom River Pack and Sheriff of Stonepass, has watched each of his two best friends enjoy their mated bliss. He's thrilled they've found happiness, however, he feels a distance growing between him and his blood brothers because he has no experience of the connection between a shifter and his mate. Cooper fills the hours of his lonely days by spending as much time as possible working at the station to protect his town, and, secretly, off on dangerous missions for the government. Burning the candle at both ends gives him little time to focus on his longing to have a mate of his own.

Darren Caisil is on the run. Accused of a murder he didn't commit, it's either become a lone wolf or be killed by the very pack he'd spent his life trying to serve. He hits rock bottom when he finds himself lost, alone, hungry, and freezing in nowhere Montana during the dead of winter. His last semi—conscious thought as he succumbs to the inevitable is that an angel is lifting him towards heaven. When he wakes up in unfamiliar surroundings, he finds it wasn't an angel after all, but a man. And not any man, but another wolf shifter…one who claims to be Darren's mate.

As they explore their mating bond, Cooper tries to get Darren to open up about his past but the man refuses to share his secrets. Frustrated, Cooper decides to do a little digging on his own. Unfortunately, it seems Cooper's investigation may have stirred up a hornet's nest when it draws the attention of some of Darren's former pack members who are bent on revenge…

The Taste of Devotion

Cooper pulled up to the single-storey house with a sigh. The swirling red and blue lights on top of his vehicle cut a foreboding swath through the night sky, their presence the complete antithesis of the cheerful light displays dotted up and down the residential street. He keyed his location into the system that Jody monitored back at the station. Each department vehicle was outfitted with Global Tracker, but Cooper still liked to log in when he stopped for a call. You never knew when things could turn to crap and backup might be needed.

Pushing open the driver’s side door of his vehicle, he grimaced when the cold air hit him. He unfolded his legs from beneath the dash and pushed his way out of the vehicle, only to land in a fresh pile of snow the plough had yet to clear from the road. It was a good thing he always wore his uniform pants tucked into the waterproof combat boots that had been a part of him since his days in the military. Otherwise he’d be cussing up a storm at the unwelcome addition of snow to his skin.

The Andersons’ neighbour had called in saying that the couple were screaming at each other again, and that he’d heard a loud crash. It was hardly the first time such a report had been made. Everyone in town knew that the couple had a rather volatile relationship. The human pair was known in Stonepass for their arguments. However, every time Cooper or one of his deputies came out to the house, neither one would press charges. Also, their fighting always took place in the privacy of their home so no public disturbance charges could be brought against either of them. Cooper suspected that in some warped way the two needed the conflict to keep their marriage in balance. While several inanimate objects had paid the price, neither Mister nor Missus Anderson had ever physically harmed each other. So each time a call was made, the Glacier County Sheriff’s department would go and investigate, give out warnings, and ultimately turn back around—shaking their heads in frustration. Cooper wished they had picked a warmer night for their latest row.

He took a step towards the front porch. His boots crunched through the snow, and he cursed as a particularly deep spot caused him to sink almost up to his knee. Being six foot six, that was a rare occurrence for him, but Stonepass had been under near-blizzard conditions for the past three days, and it appeared as though the Andersons hadn’t shovelled their walkway when the storm had finally moved on to its next victim that morning. Chances were they hadn’t bothered to remove the remains of the previous storm, either.

For whatever reason, Mother Nature had decided to be a real bitch this year. It was only a week before Christmas and according to the databanks, Stonepass had already received almost eighty inches of the white stuff. They said if the trend continued, his town was on target to receive nearly three hundred by the end of the season. That was more than four times their normal amount. Cooper really hoped that they were wrong—whoever they were. He liked snow and all, but come on. He looked up to the sky. For the first time in days, the clouds had receded and stars winked down from the inky black blanket.

He’d reached the base of the steps of the hundred-year-old home when the door was wrenched open and light from inside spilled out onto the wooden porch. Mrs Anderson came stomping out, her arms flailing as she turned around and yelled. She didn’t have a coat on, and Cooper was about to yell at her to get back in the house when her high-pitched voice screamed out.

"You good-for-nothing bastard! I’ve had it! I’m done!"

Mr Anderson came to the doorway and leaned against the frame. "Yeah? Ten bucks says you’ll be back by morning."

"Not this time. I’m sick of living like this!"

"Like what? You have a roof over your head, plenty of food—"

"And a husband who doesn’t love me. A man who I bet would rather spend his time between the legs of his favourite barmaid than his wife."

Mr Anderson straightened from where he was perched and took several steps towards his wife. "Now you wait a goddamned minute. I may be a lot of things, but unfaithful to you has never been one of them," he growled.

Cooper shook his head and sighed. "Steven, Rhonda—take it inside. You know I don’t want to bring the two of you in for disturbing the peace. Besides, it’s too damn cold out here."

Rhonda spun around, her eyes wide as if she’d just realised they had an audience. "Cooper! How long have you..." She looked back at Steven. "Now see what you’ve done?"

"What I’ve done? I’m not the one who stormed out of the house and started airing our dirty laundry at the top of her lungs for all the neighbours to hear. Not to mention threw the chair against the wall and broke the window, which is undoubtedly why our sheriff was called in the first place."

"Well, if you’d gotten up off your ass and helped around the house, I wouldn’t get so frustrated in the first place. For God’s sake, is it so damn hard to put your dirty work clothes in the hampers, of which I’ve placed three around the house, versus dropping them on the floor inside the front door? Or how about actually throwing away the packaging of your latest tool after you get done opening it instead of dropping the wrappings on whatever flat surface you come across first?"

"Me?" he exclaimed. "Don’t act as if you’re Missus Neat Freak. What about you and your penchant for leaving your half-finished drinks lying all over the house, or how about the fact that the dust bunnies on our bedroom tables have started climbing on top of each other to make little dust towers!"

Cooper had heard enough. Much longer out here and they would all get hypothermic and catch pneumonia. Well, the humans would. Of course, even though he didn’t have the same vulnerabilities, that didn’t mean he enjoyed freezing his balls off. He took out his restraints. Maybe a couple of hours in lockup would cool their jets? He started up and had just placed his boot on the top step when everything happened all at once.

Rhonda spun back towards him and tried to push past him to get down the stairs. Her foot slid out from underneath her, and she collided with him. Cooper caught her, but even his boots were no match against the layers of snow and ice that covered the wooden porch. Her momentum forced them over the open side of the steps. Steven rushed forward and grabbed his wife’s arm. Unfortunately, momentum was even a bigger bitch than Mother Nature, and Rhonda also pulled Steven across the porch, causing him to hit his head on the corner post.

I really enjoyed getting the opportunity to revisit the couples from the first two books and finding out how Charlie has adjusted since his rescue in the second book. The PHANTOM RIVER series is a...

The Taste of Devotion was a very enjoyable novel and a great set-up for the next book in the series, The Sound of Salvation, which I found to be the best in the series so far. Recommended.

Share what you thought about The Taste of Devotion PRINT and earn reward points.