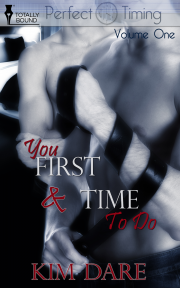 All Luke had to do was come after Justin. How difficult could that possibly be?

Justin was five years younger than Luke and relatively inexperienced. Luke had enjoyed more lovers than he could count or remember - he knew he was good at sex. There was no good reason why Justin should outlast him every time they hooked up.

All Luke had to do was come second, set his mind at ease, and everything would be perfect between them. Hell, if he could do that, he might even consider the serious relationship idea Justin seemed so taken with.

How difficult could that possibly be?

The words 'have sex with a man' can change everything, especially when they're written on a straight man's to do list.

Rigby and Brennan have been best friends forever. Growing up and going away to university didn't alter that. Brennan coming out of the closet to his straight best friend didn't change anything either.

But when Brennan finds an old to do list mixed in with his friend's possessions, and sees 'have sex with a man' written right there at the top, it alters everything. When Brennan realises the man he's in love with isn't as straight as he'd always thought he was, their friendship changes beyond all recognition.

When the friends decide it's time to start ticking off all the items on Rigby's gay to do list, they soon realise nothing will ever be the same - for either of them.

Reader Advisory: This book stands alone and does not have to be read as part of the series.

Luke Anderson was not going to come first.

He repeated the mantra over and over inside his head as he held his hands out to be bound. Justin Collins deftly buckled the soft leather around his wrists. Tugging on the chain between the cuffs, he positioned Luke on his hands and knees in the middle of the bed.

Justin attached the cuffs to a little hook screwed into the headboard for that precise purpose. He pulled at the chain, testing how securely it would hold Luke in place. The metal links clinked together. Luke took a deep breath. All his best sexual experiences occurred to that theme song. The sound went straight to his cock.

Luke was still not going to come first. He was Luke Anderson, newest and highest flying barrister in the best chambers in London. He could bloody well do anything he set his mind to.

Justin’s hand applied pressure—a steady pressure to the back of his neck. Luke lowered himself onto his elbows. The pressure didn’t ease. Luke turned his palms up and rested his head in his hands. Head down and arse up, Luke closed his eyes. He told himself for the thousandth time it must be possible.

Just because he hadn’t outlasted Justin yet, didn’t mean he couldn’t do it. He just needed to focus. He was twenty-three years old—five years older than his lover. He’d topped and bottomed more partners than he could count or remember in both genders. False modesty and jokes aside, Luke was well aware he knew tricks even most really expensive professionals hadn’t mastered.

He shifted his knees further apart on the mattress as Justin moved into position, kneeling on the bed behind him. He had to outlast Justin just once, just so he knew he could do it. Just for pride’s sake, because Luke knew his lack of self restraint was the only thing that kept sex with Justin from being perfect.

Justin’s fingers slipped briefly inside him, checking he was slick, relaxed and ready to play. Luke bit his lip and held back a moan as Justin crooked his fingers and found his prostate.

He could do this. Practicing a little bit of restraint wouldn’t kill him.

The rustle of the packet when Justin slipped on a condom was his only warning. Justin slid into him in one smooth movement. Luke gasped. For a perfect moment, Justin stilled inside him, stretching him and filling him completely. He began rocking his hips, building up the movement in tiny increments. Only when Luke whimpered his frustration did Justin begin to thrust into him in earnest.

In what felt like moments, lethal frustration was a growing possibility. Each stroke pressed against Luke’s prostate in a rhythm calculated to throw him over the edge at any moment.

He tried to remember he didn’t want to fall into pleasure—why he didn’t want to jump over the ledge with his arms spread wide in enthusiastic abandon. All he could think about was just how glorious it would feel when he came with Justin still buried balls deep inside him.

But still, in the back of his mind the mantra continued. Luke was not going to come first.

Desperately trying to concentrate on anything other than Justin’s erection pounding into him, Luke scrambled for any other details and senses to focus on.

The cotton sheet underneath him was pale blue. At this angle, with his nose barely an inch from the surface, Luke saw it was actually two shades of thread blended together. He couldn’t bring himself to care. His prostate sang inside him, coaxing him to join in with it in harmony, groaning his pleasure at every inch of delicious friction.

The scent of their arousal filled the room, mingling with Justin’s aftershave. Justin always smelt fantastic. Another perfect thing to add to all the other perfect things Luke had noticed over the months they’d been hooking up for sex. He always smelt like old sandalwood and well worn leather. Luke loved pressing close against Justin’s body and taking deep breaths of his scent when they danced together. He loved sliding his fingers up into Justin’s hair and pulling him close, to wrap Justin’s scent around him.

Brennan Talbot was not going to stare at his best friend’s arse. There was a line a gay man didn’t cross while sharing a room with his straight best friend. He was going to stay on the right side of that line even if it killed him.

Turning around, Brennan held back a sigh. If he could just keep Rigby from bending over all the time, his life would be a hell of a lot easier. His friend possessed a truly wonderful backside, not to mention a preference for very tight jeans.

Brennan picked up yet another of Rigby’s text books off the floor and placed it on his desk. “Where do you get all this stuff from anyway?” he asked.

Brennan risked a glance over his shoulder. At least his friend was standing up straight now.

Rigby shrugged. His shoulder muscles rippled under his t-shirt. He added another book to the growing pile on his desk. “It all just turns up somehow. Anyway, quit complaining. You’re the one who insisted we rediscover the floor today.”

Brennan looked around their room. Small patches of carpet were slowly starting to emerge between the layers of Rigby’s junk. “I go home for one weekend and a bomb explodes,” he muttered to himself. He doubted that Rigby was actually listening anyway. “You could at least have kept the debris on your side of the room.”

Rigby chuckled at the familiar complaint. The low deep sound filled the small room and made Brennan smile in spite of his annoyance.

“I was looking for my locker keys,” Rigby offered by way of explanation. “All the other stuff was in the way.”

“So you threw it on the floor?” Brennan asked, putting a folder of history notes on the desk.

“Well, I usually ask you where stuff is and you tell me. You weren’t here so I had to improvise. Are you studying The Fall of the Roman Empire?”

Brennan glanced at the book in Rigby’s hand. “Doesn’t really fit in with a Physics degree, does it?”

“Then I guess this one’s mine, too.” Rigby frowned at it and put it on the shelf above his desk. “I don’t suppose you want to take a break and get something to eat?”

Brennan looked at the containers of food his mother sent back to the university with him. It was tempting, but he knew if they stopped before the floor was clear, the room would remain in the same state until the end of term.

“No,” he said firmly. “Floor first, then food. I’ll even share the cake my Mum made if we finish it in the next hour.”

“I think you’ll find it’s bribery,” Brennan corrected absentmindedly. He picked another folder up off the floor and read the title scrawled across it in Rigby’s handwriting—stuff. Well, that was informative.

Brennan tossed it towards Rigby’s desk. As it landed, the edge of the cardboard folder collapsed. Papers snowed down to the floor. Kneeling on a rare patch of carpet to pick them up, Brennan skimmed over a few lines on the top page.

A glance identified it as some sort of to do list. Such a rare sign of organisation in Rigby’s life had to be worth investigating further. Brennan read point number one—get drunk, and grinned. That was more like the Rigby he knew. There was a decisive tick by that point.

When Brennan read point number two—go skinny dipping— there was no chance he’d stop reading. An image of Rigby bare arse naked flashed across his mind and dropped straight to his crotch.

That particular image had been carefully constructed over several months of sideways glances, but it was far from up to date.

Brennan might know he’d never get more than friendship from Rigby, but he wasn’t prepared to lose that friendship by sneaking a peek at Rigby’s cock in the showers after rugby practise. Not when the possibility of passing off his actions as teenage curiosity, or an innocently heterosexual interest in making comparisons, died the day he told Rigby he was gay.

Despite the story's short length, the two main characters are fully developed and the emotional impact deeply felt. I loved their hot sex, their growing relationship and the humorous touches throughout...I...

Share what you thought about Perfect Timing Vol 1 PRINT and earn reward points.