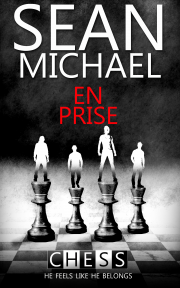 Book 3 in the Chess series

Just when things seem to be at their best, disaster strikes. Will all the men of Chess survive?

It's the holiday season and Jason is having the best Christmas he can remember in a long time. He's in love with Rook and settling in with Bishop and Knight, figuring out where he fits and learning to love their appetites. He might even be feeling like he belongs.

Holiday bliss is followed by disaster, though, when Knight is involved in an accident and is hospitalized. Will Jason, Bishop and Rook be able to rally around their lover and each other? Or will the strain put on their relationship tear them all apart?

That was the biggest tree he’d ever seen.

Two blond heads turned towards him, and suddenly he knew how Knight felt sometimes, with people looking at him like he’d just spoilt a party.

Rook slinked over and wrapped around him, not caring that they were in the middle of the tree lot. Rook never did and if people didn’t like it, they could lump it. “Don’t you like it? It’ll fill the living room perfectly!”

Rook was so warm and Jason hated being the spoilsport, but sometimes he felt like he had to be the voice of reason. “It’s huge. Knight said…”

Knight had thrown a fit about even leaving his studio. He’d been…almost ugly about the whole holiday thing. Jason hated to give him more ammunition to make a fuss, especially this time of year.

Bishop snorted. “Knight is being bitchy. He’ll get over it.”

Rook nodded and looked at Bishop. “He needs a spanking and a good hard fuck.”

“I know what he needs, Rookie. Don’t worry, he’ll be sweet for the holidays.” Bishop sounded sure. Bishop always sounded sure.

“Oh, God. Tell me there aren’t porny ornaments.” Why did he think it was a vain hope?

Rook let go of him to bounce. “There so are!”

“Oh, man…” He shuddered to think. “Tell me there are rainbow lights at least?”

Bishop chuckled. “There are. And it’s a huge tree, so if there’s anything you want on it that we don’t have, all you need to do is speak up.”

Rook nodded and bounced some more. “I love Christmas!”

Rolling his eyes, Bishop teased, “You love every day, Rookie.”

“I do.” Rook grinned and winked at Jason, slipped a hand in his. “What’s not to love?” he asked gently.

Jason couldn’t help his smile, at all. Rook was… How could anyone on earth not adore this man? Rook was like Christmas every single day.

“Come on, I’ve already paid for this thing. Let’s drag it home.” Bishop got them moving.

“How on earth are you ever going to get it anywhere?” Eighty feet tall, at least. It was insane. He wasn’t sure it was going to even fit in the house. Sure, the ceilings were high, but this tree was like the ones you put in front of a town hall or somewhere. Outside.

“We’ll tie it to the top of the car. No, Rookie, don’t unwrap it until we get home or it’ll be impossible.” Bish growled a bit as Rook pouted, but Rook stopped trying to undo the twine holding the tree branches against the trunk. “Jase, if you grab the bottom end, I’ll get the top.”

“You got it.” Between him and Bishop, they could lift a lot of weight, easily.

They got the tree to the car and Rook grabbed a blanket from the trunk, laying it on the roof so they could hoist the tree up there without scratching the shit out of the paint job. There were bungee cords, too—it looked like Bishop had thought of everything—and in short order, they had the tree affixed to the top of the car. The only drawback was they couldn’t completely close the windows.

“See?” Rook made ‘ta da’ motions with his hands.

Jason stared at Rook. “It’s huge.” There was easily three feet of tree hanging over the front and back of the car.

Bishop laughed. “Get in the car, Rookie.”

Jason’s cheeks were burning, and he slipped into the car before his lover. Rookie sat next to him, resting his hand on Jason’s thigh, squeezing as Bish started the engine and headed carefully onto the road. It felt good—Rookie always did make him feel that way.

“I… Do you guys have a Christmas meal tradition?” He wasn’t sure he could cook a fancy meal.

“Uh-oh.” That was from Bishop up front and Rook actually blushed.

Reviewer 1: I just love this series; each book is so hot! Another great book and man, I just can’t get enough of these four guys.

Reviewer 2: En Prise is the third in the series and i...

The balance between the chess analogies and erotica definitely works for me, and this stage of their story was as explosive as I had hoped. If you like sexy men who challenge and support each other...

Share what you thought about En Prise and earn reward points.