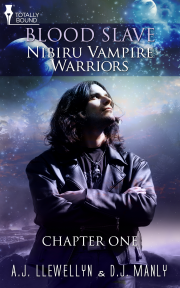 Zero struggles to resist becoming Stride's blood slave but can he also resist the burning lust the cold hearted fiend is arousing in his very soul?

Nibiru, known by some as Planet X, is poised to strike earth and wipe out everything in its path. Stride, a solitary vampire with powers delivered down to him through his sorceress mother, senses its arrival. And he intends to survive…to escape to the planet itself in hopes that he will find a blood source there.

What Stride finds is a desolate place with no life in sight. Then he sees him, the vampire who sought him out on earth just before the disaster struck, the one who told him…there are only two. Only two vampires with no humans to be found means only one thing, only one of them can survive.

Zero knows it's only a matter of time before he becomes Stride's blood slave. His ship crashed on Nibiru, and his human lover perished, leaving him alone and vulnerable. And Stride is tracking him in a deadly game of cat and mouse, determined to survive.

Reader Advisory: This book is part of an ongoing serial series, best read in order as it continues.

Emptiness. That’s all there was. It resounded all around him like some sort of independent energy force. This sense of being completely alone was ominous, so much so that it was how he knew he was still out there.

He’d come so close. He’d almost had him once but like grains of sand, Zero had filtered through his fingers. It was a simple—a well-known game of cat and mouse. In the beginning it had been fun, but eventually it would become tedious and he’d have to end it. There was no escape from fate. They both knew it was only a matter of time.

Stride paused and looked around him, every instinct honed for any sound, or sign of movement. Nothing. There wasn’t even a rat left to feed on, not that he particularly enjoyed the flavour of those nasty things.

Overhead, the foggy sky was darkening. There didn’t appear to be any actual sunlight, which he supposed was kind of a fringe benefit. Yet, at various times the clouded sky brightened just enough for Stride to declare that it was daytime. This so called daytime was irregular. It didn’t happen in twenty-four hour cycles like it should. But then, nothing was as it should have been anymore.

He sank down on his haunches and surveyed his surroundings. In front of him sat a cluster of overgrown trees. Beyond that, more open spaces of mountains and nothingness.

This was a very odd place. The contouring of the landscape might have been conceptualised by some sort of an idiot. If it had ever been colonised, he couldn’t fathom what sort of commerce they would have practiced here. There were no normal concentric zones, dividing cities and agricultural lands. Instead, there were just miles and miles of open spaces. Then suddenly a forest would appear out of nowhere for another few miles, leading one towards big mountain slopes where a multitude of caves appeared to have been hand-carved out of the rock. This pattern repeated itself over and over, with small bodies of water, now mostly mud, scattered round here and there.

Planet X—that’s what many scientists on Earth had called it. Others called it Nibiru. Scientists believed Nibiru had crashed through the solar system a long time ago and wiped out all the dinosaurs. That had never been proven, of course, and now it never would be. The only ones who could give credence to that theory—any theory—would be two lone blood drinkers.

His kind had mostly been wiped out down there on Earth. Once some brazen vamp had decided to introduce himself to humanity, the hunt was on. Humans had a new enemy, right in their own back yard, and they had carte blanche from the authorities to kill them all. After all, it really wasn’t murder. You couldn’t murder the dead. And, of course, the religious right had a field day talking about how “vampires were Gods curse on humanity.”

The “war on vampires”, aside from providing rednecks with the opportunity to go and kill something, served to distract humans from their misery. The fact was, their environment was going to shit. People were dropping like flies from the crap they breathed, and capitalism was failing everyone except for those at the top. The very rich just kept on getting richer. Corruption ran unchecked. The rest were losing their jobs and being thrown out of their homes. Perhaps Nibiru’s destruction of Earth was some sort of blessing in disguise.

It is a compelling and entertaining story. The characters are well rounded giving us a steamy looking into their souls. A.J. and D. J. pull you into the story and create a unique world for you to live...

I love love love AJ Llewellyn and DJ Manly books. When I got this book I didn't even house the thought that I wouldn't love this book too. However Love isn't a big enough word to express...

Share what you thought about Nibiru Vampire Warriors: Chapter One and earn reward points.