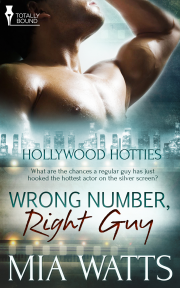 Book 1 in the Hollywood Hotties series

A wrong number with a sexy voice on the other end… What are the chances a regular guy has just hooked the hottest actor on the silver screen?

Ryan Pierce is in town shooting the latest romantic action movie and attending all the right publicity parties. He wasn’t expecting to pick up the phone to an easy laugh and real conversation. So, when he discovers that his caller has misdialed, it surprises him even more that he doesn’t want the man to hang up.

Dar Phillips is the last man to get star-struck, yet his best friend drags him out to be an extra on a movie set. It’s a chance to meet the guy on the set who he accidently called, but he has to admit the lead actor is hot stuff. Could the loping mega-star be his phone-a-friend? And, when they kiss, is Dar ready for the paparazzi and accusations of betrayal by the man who now stars in Dar’s every dream?

Who did Dar fall for? The elusive Ryan Pierce, who can’t be seen with him, or the quiet, gentle man who’s just a phone call away?

Ryan Pierce’s private phone rang. He rolled over, glancing at the clock and blinking when he saw it was a little after five in the morning. He blearily snatched up the phone. If it was his agent, Ryan was going to rip him a new one.

Normally he was up already, doing Pilates or jogging, but it had been a late night in a new town. Clearly, whoever was calling hadn’t kept that in mind. They must be depending on him to be up early as usual.

“Hello?” His sleep-roughened voice rumbled low into the phone. Ryan covered the mouthpiece and tried to clear his throat.

“Hey. You still asleep?” the man on the other end asked.

The distant voice laughed. “Jesus, I did wake you up if you don’t know who this is. Sorry, guess that party kept you up later than you expected last night. You were in rare form.”

Well, that much was true. The Red Carpet welcome event for his newest romantic comedy had been a butt-kissing extravaganza. With filming set to commence in another day, schmoozing with the local mayor and his puffed-up friends was more about securing cooperation from the city than publicity.

Selene Laramie hadn’t let go of his arm, opting to hug it tightly to her surgically enhanced bust. Ryan figured he’d have two breast-shaped bruises on his arm this morning.

The compensation had been the three Long Island iced teas he’d downed. Although it could have been the four champagne chasers. Ryan nearly groaned into the phone as he realized exactly how much he had drunk. He’d have to go on a three-day diet to drop any of the additional calories he’d picked up. The last thing he needed was Jack, his agent, after him about all the starring roles he’d lose now that he’d chunked up over a few drinks.

“Yeah, well, I’m feeling it this morning,” Ryan confessed on a small laugh. He just hoped to God that this mini city had a drug store nearby.

Ryan couldn’t place the voice, no matter how much more he woke up. He certainly couldn’t remember any circumstance where he’d needed to convince anyone to ‘go for it’. “Who?” he asked, feeling as though he was missing part of the conversation.

“Jack,” Ryan repeated stupidly. The vacation? He’d been trying to convince Jack to let him take some time off, but since Ryan had made it big two years ago, Jack had seemed more tenacious than ever. He’d been trying to think about how to talk Jack into it, but he hadn’t really dedicated himself to the effort since Ryan firmly believed he needed to ride the fame-train while he was still the fresh, hot face in Hollywood. “I don’t think I’m going to talk to him, yet.”

But who the hell had he told about his eagerness for a break? He couldn’t think of a soul. Had he spilled to someone last night after a few drinks?

Ryan rubbed his eyes, now fully awake. He sat up and scrubbed a hand down his face. The sheets pooled at his waist and he looked down speculatively at his early morning wood. He didn’t know who he was talking to, but the man’s voice was as smooth as warm butter and did nothing to discourage his erection.

He lay back, tentatively stroking his hand over his naked cock under the sheets as the man on the other end kept talking.

“Why not? I thought you’d decided it was now or never. Those were your words, if I remember correctly,” the man said.

“What else do you remember?” Ryan asked. Part of him was still trying to figure the guy out. Another part of him just wanted to keep the man talking.

I can’t say enough wonderful things about this story. Mia Watts is quickly becoming one of my favorite authors! The ease in which Dar and Ryan just fit together; the w...

Share what you thought about Wrong Number, Right Guy and earn reward points.

I’ve always been rather fascinated by the idea of a phone call opening the door to something unexpected. When I was a kid, I made the requisite prank calls—“Sir, is your refrigerator running? Well, go catch it!” and “Is Cinderella home. This is an out of work mouse.”—like most kids do. As you can see from my examples, I wasn’t very creative. Mostly, I panicked and threw something out there. The Cinderella call resulted in an older man playing along with me. As a kid, I was disappointed. As an adult, I think that man was pretty awesome.