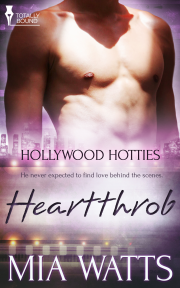 Book 3 in the Hollywood Hotties series

Brett Shackley came to Hollywood for a taste of the fast life and hot, famous men. He never expected to find love behind the scenes.

Brett Shackley has watched his best friend find love with a famous actor. His connections have also given him the opportunity to work as a personal assistant to another Who’s Who in Hollywood. He’s a bit flamboyant and perhaps a tad too giddy when he settles on a new celebrity crush. So blinded by the brilliance of the bright lights headliner, he fails to see what’s right before his eyes.

Brett follows his boss to yet another movie set, preparing to scope out the new faces on the latest project. Sadly, it also means he’s sidelined with all the other assistants and behind the camera crew. Brett doesn’t mind too much as long as a certain actor gets a shirtless scene—and soon!

Eddie Huff has been around a couple of years. He knows a thing or two about playing it cool. The fact that Brett, a fellow personal assistant to the stars, is going gaga over Eddie’s A-list boss annoys him. Now he has to stay in close proximity with Brett. He gets to hear each longing sigh and flattering gush of superlatives—every single day. It’s enough to drive a guy insane.

What’s worse is that Eddie begins to suspect he might be just a teeny bit jealous that Brett’s single-minded attention is wasted on a star who couldn’t care less about anyone except himself.

Eddie thinks Brett might be the man for him. Now he has to convince the starry-eyed novice that the right heartthrob for the part isn’t the guy in front of the camera.

Brett Shackley tucked his cheek against the phone and spoke softly to his best friend Dar Phillips, “He’s here. Oh. My. God. I can’t believe this is my job!” Brett had tried to sound nonchalant at the beginning of the conversation, but the best of Hollywood had already worked its charm. His whisper was forgotten for a schoolgirl squeal. Brett glanced around to see if anyone had heard. Seeing he was in the clear, he grinned widely, barely able to contain his excitement.

“Get a grip,” Dar said, chuckling. “Ryan didn’t pull strings so that you could ogle Hollywood’s elite.”

There was a pause, then both guys said, “Yes, he did,” at the same time and laughed.

Brett smiled. Ever since his best friend had hooked up with Ryan Pierce, one of Hollywood’s hottest bachelors, Brett had been begging for a foot in the door. And Dar had made it happen! God, could there be a better bestie?

“Just don’t embarrass yourself,” Dar warned with a chuckle.

“Yeah, you. I know how you get when you’re excited—and flirting.”

“Some guys like my unabashed joy,” Brett snarked playfully.

“I like those things about you too, but you gotta give them time to warm up to you. You can be intense.”

“Dude, I love you, but I gotta go. Damon. Dexter. Just. Walked into the studio!” Brett punctuated each word with the importance it was due until he couldn’t contain the thrill and the words blended together in a rush at the end.

God made man. When it came to Damon Dexter—as far as Brett was concerned—God was man. Day-um! If there were a way to draw out that single syllable any longer, Brett would’ve done it. His brain practically sizzled as he watched the Hollywood heartthrob stride to the long table positioned in the middle of the warehouse-sized set where other actors already waited. Other actors, including the one Brett worked for, who waved at him with tangible impatience.

Brett waved back. “Coming!” he sang out as he dashed to Ian Brewer’s side. It didn’t hurt that Ian Brewer sat directly across from Damon Dexter. Was there a way to stare and drool without being obvious?

Brett gazed at the new arrival, hoping Damon would feel it, lift his head and smile. The Hollywood playboy knew his effect on members of both sexes. Brett waited expectantly, keeping his eyes wide and unblinking, a friendly expression on his face. Or maybe it was a desperate stare and the smile of a sexual predator. He couldn’t be sure, but what the heck.

“Huh?” He blinked and dragged his attention to his boss, a movie star in his own right, although not nearly as A-list as Damon Dexter. Was there a C-list? Because that was pretty much where Ian fell. It was a coup for an actor like Ian to work with Damon.

Thinking about calling the star by his first name, as if they were lovers, sent delicious shivers down Brett’s spine. If only.

This book is a really good one. We follow along with a young and whimsical Brett as he moves through the Hollywood movie scene. He's just looking to have a good time. He never expected Eddie. Good thing...

I really enjoyed the emotion of this one and I have to say is the perfect complement to the first book of the series. The concept of Hollywood Hotties is a win but on paper it is a fun romance.

Share what you thought about Heartthrob and earn reward points.