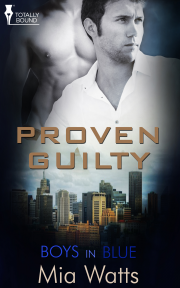 James is positive he's not gay—almost, but when his new roommate and District Attorney liaison calls his bluff, another boy in blue might just be proven guilty.

Detective James Runyon is rough around the edges with a reputation for causing trouble. So when a fellow officer accuses him of being gay, he knows the guy is full of shit.

But his new roommate, Shawn Janis, is slim, sexy, gorgeous and setting off way too many alarms for his comfort. And trying not to look at him has James in a tailspin of avoidance…until Shawn calls his bluff with an office kiss.

Reader Advisory: This book is best read in sequence, after Knight's Fall.

James Runyon stopped cold in his tracks. His gaze caught and held. Though he couldn’t quite make out what he saw, it hitched his breath all the same. The movements were primal, and his body understood completely. It brought him to full, aching arousal.

James hated that he couldn’t tear his eyes away. A fellow officer at the interdepartmental camp he’d been forced to attend was on his knees before the gingered FBI agent. From James’ view point, Knight—God, was he? He was blowing Powell?

The tree Agent Powell leaned on blocked James’ direct line of sight. He took several sidesteps to get a better vantage. What he saw riveted his attention.

Liam Knight, all-around guy’s guy, pumped his dark head up and down Agent Powell’s pale cock. His nose alternately buried itself into ginger curls at the base. His lips stretched around the width and popped over the dusky rose-coloured rim of Powell’s cut cockhead.

Powell was all but completely naked. His shoulders pressed the tree, but his back bowed forward, naked, pale, a smattering of freckles across his shoulders and arms. The way his chest heaved through every breath, the open-mouthed panting as Powell stared down at Knight’s handiwork, affected James most.

He watched as Powell’s hands stroked over his own chest then down to take hold of Knight’s head. His hip flexors undulated. His ass, bare to the woods, tightened in time to each pull of his cock.

Powell’s lean body was surprisingly muscled. Not heavily, but lean like a runner’s body. The smaller man’s moves set off a riot of things inside James that he didn’t want to address. He hated prissy men. Yet here was one of the most effeminate men he’d ever seen in law enforcement, and James would’ve given his left nut to be the one making Powell moan.

James’ balls tingled sharply. His cock jerked and his ass cheeks tightened in sympathy as Powell began to thrust. Powell fucked Knight’s mouth. Knight took it. He took it. How could he take it? Knight was as straight a guy as James had ever known and Powell a flaming flamer, flamier than his flaming red hair, goddamnit!

And why the fuck did he want to do it too? His mouth had watered for it. He couldn’t look, yet he couldn’t look away, while his mind had raced with questions.

James’ breath grew shallow and equally desperate. It was every taboo he’d ever forbidden himself from imagining. He stood entranced, engorged. His cock aching for the release Powell would get. And for a split second, he told himself, he wanted to suck Powell’s cock like that.

Powell cried out, his dick buried out of sight in Knight’s mouth. James nearly let out his own cry with equal frustration that he hadn’t come.

Knight licked Powell off and stood up, smiling. "Your O face is amazing. It’s like you’re surprised to be coming, but you’re gonna fucking ride that wave. It’s damn hot."

It had been amazing. He kind of hoped that Powell would suck Knight next. Or, God help him, bend over and let Knight take his ass. James wanted to see more, to drink it in.

No, he didn’t, he argued with himself. I’m not a fag. Only fags watch other fags have sex.

It was the nastiest term he could find to discourage himself from thinking along those lines. If he knew one thing, he wasn’t a fag. Getting sucked off was hot because he knew what that felt like. He’d only been turned on because it had been a while. Because he’d been at the camp for a week and was ready to get home and bury his cock into something warm and wet.

Yeah, that’s it. That’s what it’s about. James shut down the internal voice nagging that he’d wanted to suck cock.

This was the last part of the Boys in Blue series and it was about James. He knows he is gay but doesn't want to admit it to anyone, not even himself. That is until he gets a new roommate, who he di...

I totally recommend it for every fan of Men in Blue, aka cops and whoever out there need a good, fun and enjoyable read. God I’m still laughing with the drunken James.

Share what you thought about Proven Guilty and earn reward points.