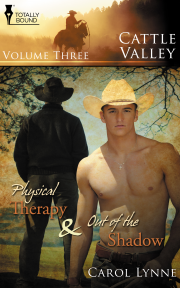 Book 36 in the Cattle Valley series

When confronting your past leads you to love.

Lovers for twenty-five years, Doctors Sam Browning and Isaac Singer decide it's time for the clinic to hire a physical therapist. They thought hiring Matt Jeffries over the phone and offering him the use of their garage apartment was the smart thing to do. That is until Matt shows up, suitcases in hand.

Three months after returning from the war in Iraq, Matt has bigger problems than his attraction to two gorgeous older men. Night sweats and flashbacks are keeping him locked in his own shell. Can two doctors offer the physical therapist a little therapy of their own?

Out of the Shadow

When Shepard Black left the rodeo circuit, he thought his days of lusting after young cowboys were over. Now owner of the Back Breaker Ranch, Shep spends his days training the stock other cowboys ride.

But when his best friend's son comes to stay with him, all bets are off. Watching Jeremy's long legs wrap around a bucking bull gives Shep too many ideas for comfort. Even worse, Jeremy seems to know exactly the affect he's having on his boss and teacher.

5 out of 5! I am a huge fan of Carol Lynne and her delicious series of homoerotic books... While the relationship and sometimes the dialogue are unrealistic, I find I can't bring myself to...

Share what you thought about Cattle Valley: Vol 3 PRINT and earn reward points.