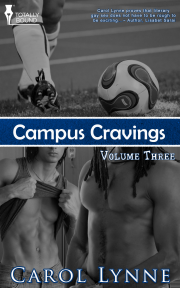 Professor Daniel Willis is used to being ordered around. A submissive by nature, Daniel needs the strong-handed love and guidance that comes with being dominated. When he gets involved with an abusive dominant he sees no way out.

Tony Bianchi is a dominant in the boardroom, but never considered taking it to the bedroom. After their first meeting Tony knew he wanted Daniel, black-eye and all. Protective of those he holds dear, he isn't about to let anyone hurt Daniel again, even if it means taking on an abuser with a badge.

Coming out of the closet is never easy, but if you're a 6'5, 290 lb All-American football player, it's even harder. Nate ‘Bear' Tucker has dealt with his homosexuality by protecting others.

Soccer player, Liam O'Brien is in dire need of a guardian angel and Bear is more than happy to protect the cute sophomore. The problem is the more time Bear spends with Liam the smaller the closet becomes.

Share what you thought about Campus Cravings Vol 3: Back on Campus PRINT and earn reward points.