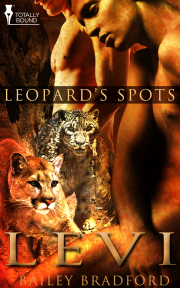 When Levi encounters a cougar shifter in the woods, the attraction is so hot it threatens to shoot off sparks. Levi has fantasized about having a stronger man than him want him, and he's sure the cougar is just such a man. Which is why Levi lets himself get caught, and the intensity of their mating is only equaled by Levi's confusion when the man shifts back into a cougar then turns tail and runs.

Travis waved goodbye to his sister Jenny and her husband Mark. It’d been good to see them as well as the rest of his large extended family. Once a year there was a reunion held on the Travis ranch. It wasn’t really a ranch, though, that’s just what everyone called it. They had some horses, but the land itself was mostly raw and unblemished.

The thousand-acre spread, nestled between the mountains in Northwest Colorado, was about the only place a group the size of ’s family could get together. It wasn’t like they could have a beach party. The thick forest, full of Aspens, pines and firs was the perfect place for the snow leopard shifters to run and hunt, although summer was a bit warm. It was better than having the reunion in winter, when tempers could be very touchy. Like snow leopards mated from January through March, so too did the shifter versions of the feline, although they weren’t bound to their hormones. They were just...hornier, and the females were more demanding and the males more possessive.

The result was a bunch of grouchy, snarly people and when they shifted? Well, had never seen it, but he’d heard Grandma Marybeth talk about the one time the family had got together in February years back. Apparently there’d been a lot of feline sexing going on, which was something never, ever wanted to think about in regards to his family. It was just best to avoid any potential early mating cycles when the group all got together.

"I am so glad the reunion’s over with," his brother Oscar muttered. glanced at him, not surprised when he saw Oscar scowling. Oscar tended to scowl a lot. "Please. It’s good to see everyone, all sixty-two of them or however many there are now, but geez, it’s also good to see them all leave."

snorted even though he did agree with Oscar somewhat. "You know you had fun wrestling with the cousins."

"Cut it out, Oz," scolded, glaring at his younger brother. It wasn’t like his fingers were atrociously mangled. In fact, the difference in his finger lengths was hardly noticeable in ’s opinion. Besides, he seriously doubted many people looked at Oscar’s hand once they actually saw him. Oscar was stunningly attractive in an androgynous way had rarely seen and always envied.

With blond hair and pale blue eyes, Oscar was delicate and fair, whereas was tall and bulky, his hair a dark auburn mess and his eyes a muted greenish-grey. Oscar was-there was no other way could think to describe it—beautiful. Maybe years ago, right after the trap accident, there’d been a few rough years when even and the rest of the family had to force themselves not to look at Oscar’s fingers, but that was because they all remembered the blood and screams, the snap of the trap as it took off Oscar’s fingertips.

But they all got over it. Even Oscar, he’d thought, but maybe not. There been a period of time when Oscar had been younger, and the occasional kid at school had been a jerk but as far as knew, that’d stopped when Oscar ignored it. Hadn’t it? had to wonder, because Oscar sure didn’t seem as over the trap incident as had believed him to be.

"You make yourself sound like some kind of monster and you’re not—as long as you get your caffeine," teased, although an un-caffeinated Oscar was not pleasant to be around. Then again, wasn’t all that brilliant or friendly without a cup of coffee or two himself every morning.

Oscar huffed as if he didn’t believe a word said, but the pink flush spreading over Oscar’s cheeks told his brother had at least heard him.

glanced back in the direction of their cabins. "Do you want help cleaning your place up?" Besides the main house, a sprawling ranch-style that had five bedrooms, there were five smaller cabins scattered over the property, one for each of the siblings.

Well, Jenny’s was vacant now since she’d gotten married, although there’d been talk of adding onto hers should she and Mark decide to move back. As usual, though, during the week of the family reunion, they all shared their cabins with whichever family members wanted to crash at the cabins. There’d been several of his male cousins camped out on ’s floor. It had been fun but exhausting-and messy. He might just need a backhoe to clean his place up.

"Nope. I didn’t have very many people staying at my place . Some of the younger kids." Oscar smiled then, looking happier than had seen him in a while. "I bet they didn’t make near the mess the guys made at your cabin."

"No shit," grumbled. "I think there’s enough beer cans to start my own recycling centre. And don’t even get me started on the bathroom." He shuddered, not entirely faking it. His bathroom was a damn nightmare, it was so dirty. Some of his cousins were slobs to the extreme. Next year they could sleep outside, because they sure weren’t housebroken, at least not to ’s standards.

I enjoyed this story and the world created by the author. It's very interesting to have shifters so unaware and it makes their learning and discovery process fairly entertaining. I am lookin...

A cute shifter story that's pretty much what I expect from Bailey Bradford. A little heavy on the sex scenes, but the plot was really interesting and kept me reading. Levi is part of a huge family of snow...

Share what you thought about Levi and earn reward points.