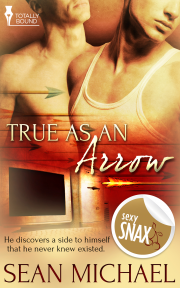 True as an Arrow

Will new revelations about Hunter’s desires rekindle the romance with Kyle or put an end to things?

Committed couple Hunter and Kyle have been together a long time. They love each other very much, but they’re apart a lot, and there are very few surprises left in the bedroom anymore—or are there?

When business trips lead Hunter to some eye-opening time on the Internet, he discovers a side to himself that he never knew existed. The kinky things he learns make him want Kyle all the more, make him want to go home and play all sorts of naughty games. He feels compelled to tell Kyle about it, even if he’s embarrassed, wanting to be honest. Will their relationship survive his revelation? Or will Kyle be disgusted by this new side of him?

Publisher's Note: This book was previously published elsewhere and under a different title. It has been revised and re-edited for release with Totally Bound.

Kyle smoothed the suit as he packed it into Hunter’s garment bag. He added three shirts—a white, a dark gray and the white with thin pink pinstripes that looked so good on his man. Socks and underwear tucked into the zippered bag at the bottom, along with Hunter’s dress shoes. Four ties clipped easily to the suit hanger, and, on a whim, he added the Tasmanian devil tie.

He zipped the garment bag up, made sure that the neck pillow was on top of Hunter’s briefcase then slipped back into their bedroom.

Sliding under the covers, Kyle curled up against his beautiful man. Hunter was tall and well-built. He had a belly Kyle both envied and admired and the best pecs ever. His dark hair curled slightly at this length, and behind dark, thick lashes were the most beautiful brown eyes Kyle’d ever seen.

“Time to wake up, babe.” He gently tickled Hunter’s ribs.

“Damn early risers.” Hunter chuckled, tugged him close. “Hey, lover. Do I have to?”

He kissed his way along Hunter’s jaw. “You need to be at the airport in about an hour and a half.” Which gave him more than enough time to wake Hunter up properly.

“Man… I should become a beach bum.” Hunter squeezed his ass with big, square hands.

Wriggling his butt, Kyle tilted his head and imagined Hunter in Bermuda shorts and a Hawaiian shirt. They would definitely clash unless Hunter let him choose. “I don’t know—all that sand in inconvenient places.”

“Yeah, chafing is crappy. Hate the long trips, though.” Hunter grinned, nipped his bottom lip. The man did security program audits all over the country—the hours sucked, but the money wasn’t bad at all.

“You’ll be home before you know it. I’ll make a roast beef dinner with potatoes, Brussel sprouts, and Yorkshire pudding—the works.” He let his hand slide down over the landscape of awesome muscles, headed for Hunter’s beautiful cock.

“You spoil me.” Hunter’s cock was still mostly asleep, but beginning to fill. “And I’ll bring you something wonderful from… Where am I going? Chicago?”

“Boston! Chicago is next month.” Kyle pressed a kiss to Hunter’s sternum. “And I like spoiling you.”

“Love you, babe.” Hunter tangled his fingers in Kyle’s hair.

Soft and lazy, Kyle worked his kisses downward. It was warm under the covers, and it smelled like the two of them. Hunter shifted that perfect, flat belly for him, parting his heavy thighs. He slipped between them, fitting just right, and rubbed his cheek over Hunter’s abdomen. He could feel the heat of Hunter’s cock rising to meet him.

“Lover.” Hunter moved his legs, pushed them against Kyle.

“Mmm…” Kyle turned his head down and licked at the tip of the perfect erection. Soft-skinned and salty, hot and swollen—he wrapped his lips around it. He hummed happily and set to slowly going down on Hunter, taking it all in.

He let Hunter have his mouth, loving the feeling of thin, velvet skin over hard heat against his lips, his tongue.

Hunter hummed and groaned, murmuring softly to him, letting him know how good it was. “Turn and I’ll do you, too, lover. Let you have my mouth.”

Only a fool would say no to something like that.

Kyle let go of Hunter and shifted until his cock was up at Hunter’s head, then he went back to what he’d been doing. Hunter took him in, the pressure growing steadily as Hunter loved on him. Kyle closed his eyes and breathed it all in, his throat working around the tip of Hunter’s cock. Hunter’s mouth knew exactly what to give him, how to give it to him, the warm hands pulling him in deep.

Kyle loved the circle of pleasure they made, his sounds coming out of Hunter’s mouth, his sucking pulling at his own cock. Hunter rocked, cock slipping a little deeper, the suction that much harder. Fuck. Fuck, yes.

Kyle sucked at Hunter’s erection for all he was worth, his hips beginning to move against his will. He just couldn’t keep them still. Hunter answered in kind, pulling at him, taking him in and in and in. He found Hunter’s balls, teased and tugged on them, giving his lover that little bit more.

The sound of Hunter just about to come made him crazy. He lost it, his own erection spurting as he pulled on Hunter’s cock. Hunter tasted salty, bitter and all male as spunk splashed over his tongue. Kyle swallowed it all down and kept sucking, encouraging every little drop out.

There is something to be said about a book that has no angst or drama. This was all about the sexual exploration both Kelly and Hunter are on. Their relationship is already solid. This was just somet...

This is a very sexy, charming story about introducing kink into a long-term relationship. I loved this.  The two men are such realistic long-term partners....

Share what you thought about True as an Arrow and earn reward points.